The house where Potti Sreeramulu died is 126 Royapettah High Road, Mylapore, Chennai; it has been preserved as a monument of importance by the state government of Andhra State. 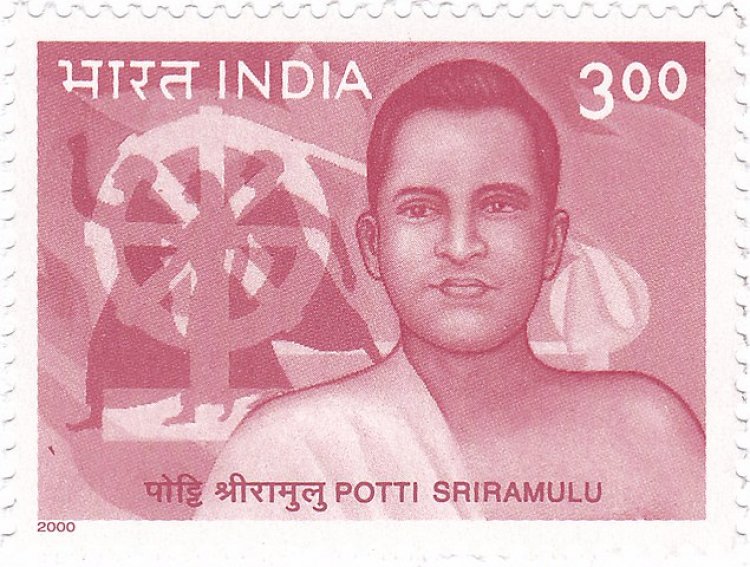 Amarajeevi Potti Sreeramulu (IAST: Poṭṭi Śreerāmulu; 16 March 1901 – 15 December 1952), was an Indian freedom fighter and revolutionary. Sreeramulu is revered as Amarajeevi ("Immortal Being") in the Andhra region for his self-sacrifice for the Andhra cause. He became famous for undertaking a hunger strike for 56 days in support of having a separate state for Andhra Pradesh; Potti Sreeraamulu died in the process.

Sriramulu was born to Guravayya and Mahalakshmamma in 1901 at Padamatapalli in a district that once was itself a region within the Nellore district. Potti Sreeraamulu was born in a Hindu family of the Komati caste.

Later, their family was shifted to Madras as famine conditions prevailed in this region. They later lived in Nellore, Andhra Pradesh. Potti Sreeraamulu completed his high school in Madras and joined the Victoria Jubilee Technical Institute in Bombay to study sanitary engineering.

After his college education, Sreeramulu joined the Great Indian Peninsular Railway, Bombay. In 1929, Sreeramulu lost both his wife and his newborn child. Two years later, he resigned from his job and joined Gandhi's Sabarmati Ashram to serve the struggle for Indian Independence.

Potti Sreeraamulu was involved in the village reconstruction programmes at Rajkot in Gujarat and Komaravolu in Krishna district, Andhra Pradesh. He joined the Gandhi ashram established by Yerneni Subrahmanyam in Komaravolu. Commenting on Sreeramulu's dedication and fasting ability, Mahatma Gandhi once said, "If only I have eleven more followers like Sreeramulu I will win freedom from British rule in a year."

Between 1943 and 1944, he worked for the widespread adoption of charkha textile-spinning in Nellore district. He was known for taking food provided by all households, regardless of caste or creed.

Potti Sreeraamulu undertook three fasts, during 1946-1948, in support of Dalit (a heterogeneous group of oppressed Hindu castes then referred to by Gandhi and his supporters by the contentious,

though well-intentioned, term Harijan) rights to enter holy places, such as the temples of Nellore. Potti Sreeraamulu fasted in support of Dalit entry rights to the Venu Gopala Swamy Temple in Moolapeta, Nellore, rights which were eventually secured.Potti Sreeraamulu again fasted to receive favourable orders, passed by the Madras government, to further uplift the Dalit community.

Some locals thought him insane, and he was chastised by the upper-castes and his own Komati community for his solidarity with the Dalit cause.

In an effort to protect the interests of the Telugu people in Madras Presidency, and to preserve the culture of Andhra people, he attempted to force the government to listen to public demands for the separation of the Andhra region from the Madras Presidency, based on linguistic lines and with Madras as its capital. He went on a lengthy fast, stopping when Prime Minister Jawaharlal Nehru promised to support creation of Andhra State. Despite this concession, little progress was made on the issue, largely due to the Telugu people's insistence on retention of Madras as their future capital. The JVP (Jawahar, Vallabhbhai, Pattabhi) committee, headed by Jawaharlal Nehru, Vallabhbhai Patel and Pattabhi Sitaramayya, would not accept that proposal.

With the Andhra State still not granted, Sreeramulu resumed his hunger strike, at the Madras house of Maharshi Bulusu Sambamurti on 19 October 1952, despite the entreaties of supporters who stated that retention of Madras was a futile cause.

Despite the Andhra Congress committee's disavowal of the fast, this action captured the public attention. Despite strikes and demonstrations by the Andhra people, the government made no clear statement regarding the formation of the new state, and Sreeramulu died during the night of 15 December 1952. Only one person before him in modern Indian history, Jatin Das, actually fasted to death; all the others either gave up or were arrested and force fed or hospitalised.

In his death procession, people shouted slogans praising his sacrifice, with thousands more joining as the procession reached Mount Road, Madras. The procession broke into a riot and accompanying destruction of public property.

As the news spread, disorder broke out in

Police fatally shot seven people in Anakapalle and Vijayawada. The popular agitation continued for three to four days disrupting normal life in Madras and Andhra regions. On 19 December 1952, Prime Minister Nehru announced that a separate Andhra state would be formed.