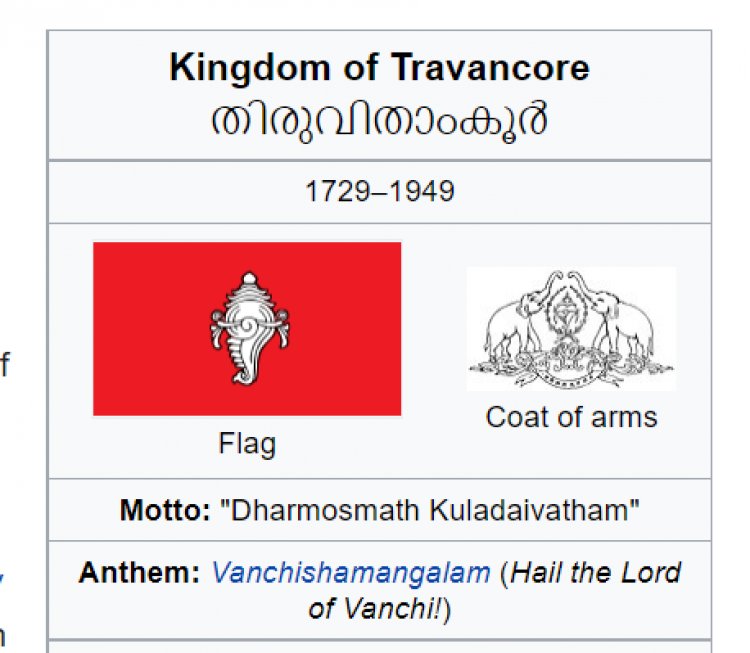 The Kingdom of Travancore, also known as the Kingdom of Thiruvithamkoor, was an Indian kingdom from c. 1729 until 1949. It was ruled by the Travancore Royal Family from Padmanabhapuram, and later Thiruvananthapuram.

At its zenith, the kingdom covered most of the modern-day Southern parts of Kerala (Idukki, Kottayam, Alappuzha, Pathanamthitta, Kollam, and Thiruvananthapuram districts, and some portions of Ernakulam district), and the southernmost part of modern-day Tamil Nadu (Kanyakumari district and some parts of Tenkasi district) with the Thachudaya Kaimal's enclave of Irinjalakuda Koodalmanikyam temple in the neighbouring Kingdom of Cochin.

However Tangasseri area of Kollam city and Anchuthengu near Attingal in Thiruvananthapuram district, those were British colonies, were parts of Malabar District until 30 June 1927, and Tirunelveli district from 1 July 1927 onwards.

The Malayalam-speaking regions of the Travancore-Cochin merged with the Malabar District (excluding the Laccadive & Minicoy Islands) and the Kasaragod Taluk of South Canara district in Madras State to form the modern Malayalam-state of Kerala on 1 November 1956, according to the States Reorganisation Act, 1956 passed by the Government of India. The official flag of the state was red with a dextrally-coiled silver conch shell (Turbinella Hyrum) at its centre. The coat of arms had two elephants standing on the left and right with the conch shell (Turbinella Hyrum) in the centre.

The ribbon (white) with black Devanagari script. Travancore was bounded by the princely state of the Kingdom of Cochin and Coimbatore district of Madras Presidency to north, Madurai and Tirunelveli districts of Pandya Nadu region in Madras Presidency to east, the Indian Ocean to south, and the Arabian Sea to west.

As of the 1911 Census of India, Travancore was divided into five divisions,

of which the first and last were predominantly Tamil-speaking areas.

The defeat of the Dutch by Travancore is considered the earliest example of an organised power from Asia overcoming European military technology and tactics. Marthanda Varma went on to conquer most of the petty principalities of the native rulers.

Travancore became the most dominant state in Kerala by defeating the powerful Zamorin of Kozhikode in the battle of Purakkad in 1755. In the early 19th century, the kingdom became a princely state of the British Empire.

Travancore was characterised by the popularity of its rulers among their subjects. The kings of Travancore, unlike their counterparts in the other princely states of India, spent only a small portion of their state's resources for personal use. This was in sharp contrast with some of the northern Indian kings.

Since they spent most of the state's revenue for the benefit of the public, they were naturally much loved by their subjects. Just like many British Indian states, violence rooted in religion or caste was common in Travancore. Swami Vivekananda described Travancore as The Lunatic Assylum in India due to the level of caste discrimination.

Vaikom Satyagraha points out the high-level Casteism that existed in Travancore. Tamil Brahmins and Nairs alone dominated the bureaucracy until the 20th century. Many political ideologies (such as communism) and social reforms were not welcomed in Travancore, and in Punnapra, communist protesters were fired at.

Travancore royal family were devout Hindus. Some kings practised untouchability with British officers, European aristocrats and diplomats (for instance, Richard Temple-Nugent-Brydges-Chandos-Grenville, 3rd Duke of Buckingham and Chandos, has reported that Maharaja Visakham Thirunal had to take bath after touching Richard's Mrs., to remove ritual pollution when they visited in 1880).

Unlike most of India, just like in Dakshina Kannada, in Travancore (and the rest of Kerala), the social status and freedom of women in Higher castes were relatively high. However, the Upper cloth revolt of the 19th century is an exception to this.

The women of lower caste hadn't the permission to wear upper cloth in Travancore. In some communities, the daughters inherited the property (though the property was exclusively administered by men, their brothers) (until 1925), were educated, and had the right to divorce and remarry, but due to laws passed starting from 1925, by the regent queen Sethu Lakshmi Bayi proper patriarchy was established and now women have relatively little rights.

Under the direct control of the king, Travancore's administration was headed by a Dewan assisted by the Neetezhutthu Pillay or secretary, Rayasom Pillay (assistant or under-secretary) and a number of Rayasoms or clerks along with Kanakku Pillamars (accountants). Individual districts were run by Sarvadhikaris under the supervision of the Diwan, while dealings with neighbouring states and Europeans were under the purview of the Valia Sarvahi, who signed treaties and agreements.