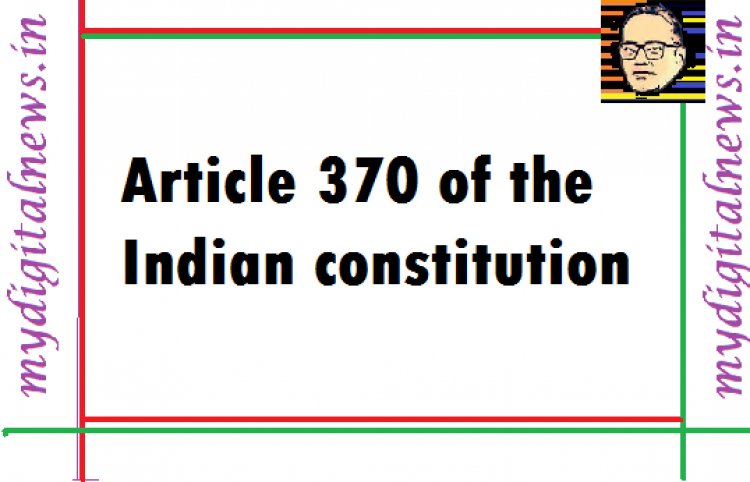 gave special status to Jammu and Kashmir, a region located in the northern part of Indian subcontinent which was administered by India as a state from 1954 to 31 October 2019, conferring it with the power to have a separate constitution, a state flag and autonomy over the internal administration of the state.

The Indian-administered Jammu and Kashmir is part of the larger region of Kashmir which has been a subject of dispute since 1947 between India, Pakistan and, partly, China, The article was drafted in Part XXI of the Constitution titled "Temporary, Transitional and Special Provisions".

Since the Constituent Assembly dissolved itself without recommending the abrogation of Article 370, the article was deemed to have become a permanent feature of the Indian Constitution.

This article, along with Article 35A, defined that the Jammu and Kashmir state's residents live under a separate set of laws, including those related to citizenship, ownership of property, and fundamental rights, as compared to residents of other Indian states. As a result of this provision, Indian citizens from other states could not purchase land or property in Jammu & Kashmir.

On 5 August 2019, the Government of India issued a constitutional order superseding the 1954 order, and making all the provisions of the Indian constitution applicable to Jammu and Kashmir based on the resolution passed in both houses of India's parliament with 2/3 majority.

Following the resolutions passed in both houses of the parliament, he issued a further order on 6 August declaring all the clauses of Article 370 except clause 1 to be inoperative.

THE CONSTITUTION OF INDIA ARTICLES IN PART 13