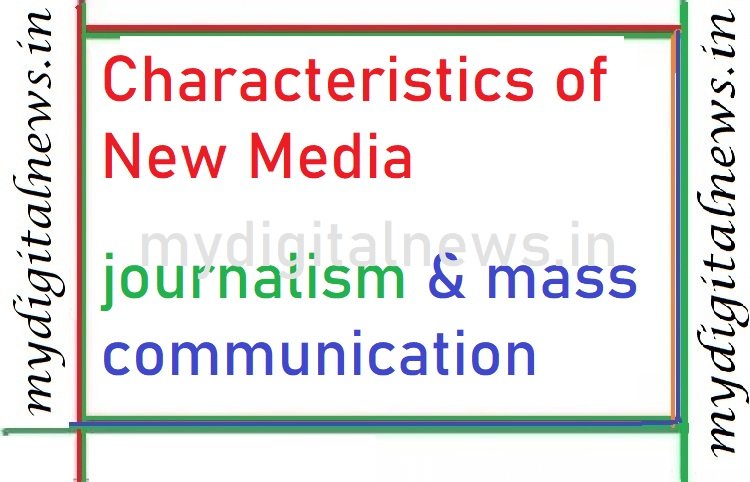 The apparently unifying term ‘new media’ actually refers to a wide range of changes in media production, distribution and use.

These are more than technological changes, they are also: textual – the type of work that is produced conventional –the ways that work is produced and cultural –context – how they relate to the rest of society

Digitality New media are often referred to as ‘digital media’, or ‘digital new media’. For most of us, this is a shorthand for ‘media that use computers’. We need first of all to think about why new media are described as digital in the first place - what does ‘digital’ actually mean in this context?

The major media of the 19th and early 20th centuries (prints, photographs, films and newspapers) were the products, not only of analogue processes but also technologies of mass production. For this reason, these traditional mass media took the form of industrially mass-produced physical artefacts which circulated the world as copies and commodities. Digital media technologies do not represent a complete break with traditional analogue media. Rather, they can be seen as a continuation and extension of a principle or technique already in place: the principle of conversion from physical artefact to signal. However, the scale and nature of this extension are so significant that we might well experience it not as a continuation but as a complete break.

Fixity and Flux  Analogue media tend toward being fixed, where digital media tend toward a permanent state of flux. Analogue media exist as fixed physical objects in the world, their production being dependent upon transcriptions from one physical state to another. Digital media may exist as analogue hard copy, but when the content of an image or text is in digital form it is available as a mutable string of binary numbers stored in a computer’s memory.

Digital processes and the material world

So digitisation creates the conditions for inputting very high quantities of data, very fast access to that data and very high rates of change of that data. However, this does not represent a complete transcendence of the physical world. Introduction to Communication and...

The limits of physical science to miniaturise the silicon chip may have already been reached. Engineers cannot physically produce technology capable of miniaturising any further without working at the level of atomic measurement. The bandwidth for transmission of the digital media that people have predicted doesn’t currently exist. The constant negotiations that any computer-based media producer has to make between memory and compression are a testament to the continuing interface with the physical world that has always been at the centre of media processing. For consumers worldwide, differences of wealth and poverty which underpin their access to other goods, services and technologies apply equally to digital media.

Interactivity has become a broad term which carries a cluster of associated meanings. At the ideological level, interactivity is understood as one of the key ‘value-added’ characteristics of new media. Where ‘old’ media offers passive consumption new media offers interactivity. The term stands for: – a more powerful sense of user engagement with media texts, a more independent relation to sources of knowledge, individualised media use, greater user choice. These ideas about the value of ‘interactivity’ draw upon the popular discourse of neoliberalism which constructs the subject as, above all, a consumer. Neoliberal societies aim to commodify all kinds of experience and offer more and more finely tuned degrees of choice to the consumer. People are seen as being able to make individualized lifestyle choices from a never-ending array of possibilities offered by the market.

This ideological context then feeds into the way we think about the idea of interactivity in digital media. It is seen as a method for maximising consumer choice in relation to media texts.

Instrumental (or functional) views of interactivity:

Being interactive signifies the users’ ( the individual members of the new media ‘audience’) ability to directly intervene in and change the images and texts that they access The audience for new media becomes a ‘user’ rather than the ‘viewer’ of visual culture, film and TV or a ‘reader’ of literature. In interactive multi-media texts, It is necessary for the user to actively intervene as well as viewing or reading in order to produce meaning. This intervention actually subsumes other modes of engagement such as ‘playing’, ‘experimenting’, and ‘exploring’ under the idea of interaction.