Human Cost of Disasters 2000-2019: UNDRR , GS Paper - 2, Important International InstitutionsInternational Treaties & AgreementsGS Paper - 3Disaster Management, This report is the outcome of a fruitful collaboration between the United Nations Office for Disaster Risk Reduction (UNDRR) and the Centre for Research on the Epidemiology of Disasters (CRED), part of the Institute of Health and Society (UCLouvain). 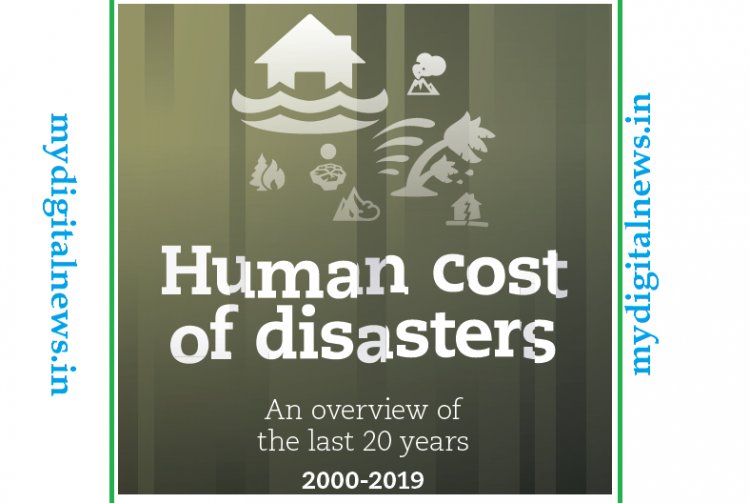 The high frequency and impact of disasters in Asia are largely due to the size of the continent and landscapes that represent a high risk of natural hazards, such as river basins, flood plains, and seismic fault lines. Additionally, there are high population densities in many disaster-prone areas of the continent.

In terms of affected countries globally, China (577 events) and the United States of America (U.S.) (467 events) reported the highest number of disaster events, followed by India (321 events), the Philippines (304 events), and Indonesia (278 events) (Figure 3). These countries all have large and heterogenous landmasses and relatively high population densities in at-risk areas.

In a new report “The Human Cost of Disasters 2000-2019”, the United Nations pointed out that climate change is largely to blame for a near doubling of natural disasters in the past 20 years. The report is published by the United Nations Office for Disaster Risk Reduction (UNDRR). The report did not touch on biological hazards and disease-related disasters like the coronavirus pandemic.

International Day for Disaster Risk Reduction is observed on 13th October every year. 7,348 major disaster events had occurred between 2000 and 2019, affecting 4.2 billion people and costing the global economy some USD 2.97 trillion. The figure is far more than the 4,212 major natural disasters recorded between 1980 and 1999. 6,681 climate-linked disasters had been recorded in the period 2000-19, up from 3,656 during the previous 20-year-period. Climate-related disasters include disasters categorized as meteorological, climatological, or hydrological.

There had also been an increase in geophysical events like earthquakes and tsunamis that are not related to climate but are particularly deadly. Major floods had more than doubled to 3,254, there had been 2,034 major storms up from 1,457 in 20 years. India is the 2nd most affected country by floods after China. Extreme heat is proving especially deadly. Heatwaves of 2015 in India resulted in 2,248 deaths.

Concern: Governments are not doing enough to prevent climate hazards. A temperature increase of 3°C of the global climate is estimated to increase the frequency of potentially high impact natural hazard events across the world. This could render current national and local strategies for disaster risk reduction and climate change adaptation obsolete in many countries. Shifting rainfall patterns and greater variability in precipitation poses a risk to the 70% of global agriculture that is rain-fed and the 1.3 billion people dependent on degrading agricultural land.

Recommendations: The concentrated impact due to a single disaster in some countries provides an opportunity for a more focused approach to disaster risk reduction. However, Covid-19 demonstrates the need for a systemic, multi-hazard approach in an increasingly globalized and interconnected world.

There is a requirement for strengthening disaster risk governance to manage disaster risk with a clear vision, competence, plans, guidelines, funding and coordination across sectors and in a manner, which takes account of the increasingly systemic nature of disaster risk.

Public and private investment in disaster risk prevention and reduction through structural and non-structural measures needs to be stepped up to create disaster-resilient societies.

The UNDRR was established in 1999 as a dedicated secretariat to facilitate the implementation of the International Strategy for Disaster Reduction (ISDR). It is headquartered in Geneva, Switzerland.

It is mandated to serve as the focal point in the United Nations system for the coordination of disaster reduction and to ensure synergies among the disaster reduction activities. It is an organisational unit of the UN Secretariat and is led by the UN Special Representative of the Secretary-General for Disaster Risk Reduction (SRSG). UNDRR’s Strategic Framework 2016-2021 has a vision to substantially reduce disaster risk and losses for a sustainable future with the mandate to act as the custodian of the Sendai Framework (India is a signatory).

The primary responsibility of disaster management rests with the States. The Central Government conducts regular mock drill, community training and awareness programmes to prepare the civilian populations for disasters.