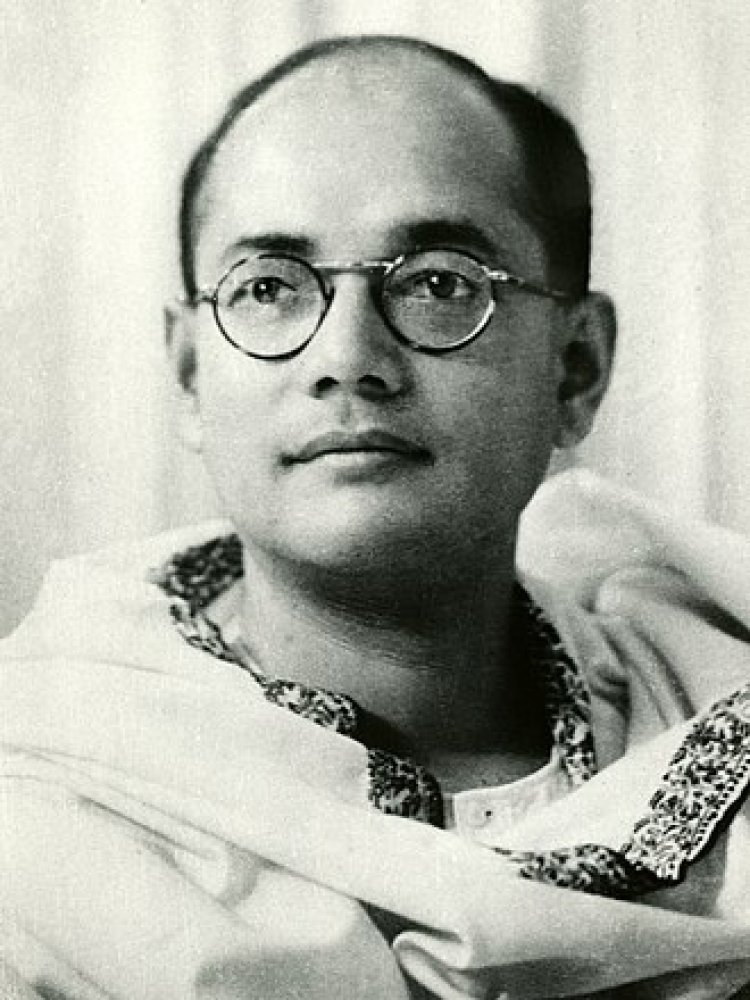 Subhas Chandra Bose 23 January 1897 – 18 August 1945 was an Indian nationalist whose defiant patriotism made him a hero in India, but whose attempts during World War II to rid India of British rule with the help of Nazi Germany and Imperial Japan left a troubled legacy. The honorific Netaji (Hindustani: "Respected Leader") was first applied to Bose in Germany in early 1942—by the Indian soldiers of the Indische Legion and by the German and Indian officials in the Special Bureau for India in Berlin. It is now used throughout India.

Subhas Bose was born into wealth and privilege in a large Bengali family in Orissa during the high noon of the British Raj. The early recipient of an unusually Anglocentric education, his teenage and young adult years was interspersed with brilliant academic success, oversize religious yearning, and stark rebellion against authority. In a college in which his five brothers had preceded him, he was expelled for participating in an assault on a professor. He was also rusticated from the University of Calcutta, but after reinstatement 18 months later he managed to study blamelessly and excel academically. Sent to England at his father's urging to take the Indian Civil Service examination, he succeeded with distinction in the vital first exam but demurred at taking the more routine but clinching final exam. He cited nationalism to be a higher calling than the civil service.

Returning to India in 1921 to join the nationalist movement led by Mahatma Gandhi and the Indian National Congress, Bose at first worked with C. R. Das in Bengal. He flowered under Das's mentorship. He then followed Jawaharlal Nehru to leadership in a group within the Congress. The group was younger, less keen on constitutional reform, and more open to socialism. Bose rose precociously to become Congress president in 1938. After reelection in 1939, differences arose between Bose and Gandhi. The senior leadership in the Congress supported Gandhi, and Bose resigned as president and was eventually ousted from the party. In July 1940, Bose was arrested by the Bengal government over a small protest and later kept housebound under a strict police watch. In mid-January 1941, he escaped from India in dramatic cloak-and-dagger fashion, heading northwestward into Afghanistan.

In April 1941, Bose arrived in Nazi Germany, where the leadership offered unexpected, if equivocal, sympathy for India's independence. In November 1941, German funds were used to open a Free India Centre in Berlin, and to set up a Free India Radio on which Bose broadcast nightly. A 3,000-strong Free India Legion was recruited from among Indian POWs captured by Erwin Rommel's Afrika Korps to serve under Bose. Bose's reputation as a politician, adversely affected in the previous two years, was refurbished somewhat.[q] Throughout 1941 the Germans intermittently but inconclusively considered a land invasion of India. Although it was peripheral to their main goals in Eastern Europe, Bose remained optimistic about its likelihood. By the spring of 1942, however, the German army had become mired in Russia, and Japan had won quick victories in Asia.

A German land invasion of India became untenable, and Bose became keen to move to southeast Asia. Adolf Hitler, during his only meeting with Bose in late May 1942, suggested the same and offered to arrange a submarine.[28] During this time Bose became a father; his wife, or companion, Emilie Schenkl, whom he had met during an earlier visit to Europe in 1934, gave birth to a baby girl in November 1942. Identifying strongly with the Axis powers, Bose boarded a German submarine in February 1943. Off Madagascar, he was transferred to a Japanese submarine from which he disembarked in Japanese-held Sumatra in May 1943. His wife, child, and 3,000 Indian men remained in Germany, the latter left to an uncertain future.

The Indian National Army (INA) had been formed in 1942 from the Indian POWs of the British Indian army captured by the Japanese in the Battle of Singapore. After arrival in Singapore, Bose enlisted Indian civilians, chiefly Tamil ones, in Malaya and Singapore. The Japanese had come to support a number of puppet and provisional governments in the captured regions. With Japanese support, a Provisional Government of Free India under Bose was formed in the Japanese-occupied Andaman and Nicobar Islands. Although the Japanese military at all times exercised firm control over the islands, Bose's visit in December 1943 was widely publicized. Charismatic and driven, Bose displayed unflagging enthusiasm for the cause of liberating India.

The INA under Bose became a model of diversity by region, ethnicity, religion, and gender. However, the Japanese considered Bose to be militarily unskilled and unrealistic, and Bose's military effort was short-lived. In late 1944 and early 1945, the British Indian Army first halted and then devastatingly reversed the Japanese attack on India. Almost half the Japanese forces and fully half the participating INA contingent were killed. The INA was driven down the Malay Peninsula and surrendered with the recapture of Singapore. Bose chose not to surrender with his forces or with the Japanese. He aimed to escape to Manchuria with a view to seeking a future in the Soviet Union which he believed to be turning anti-British. En route to Manchuria, his plane crashed in Taiwan, and he died from third-degree burns. Some Indians did not believe that the crash had occurred. Many among them, especially in Bengal, believed Bose would return to gain India's independence.

The Indian National Congress, the main instrument of Indian nationalism, praised Bose's patriotism but distanced itself from his tactics and ideology, in particular his collaboration with fascism. The British Raj, never seriously threatened by the INA, charged 300 INA officers with treason in the INA trials, but eventually backtracked in the face both of popular sentiment and of its own end.

Why India Is Reorganising Its Armed Forces Into Theatre Commands