Was Veer Savarkar a traitor ?- controversy propaganda please let us know your answers in the comment section 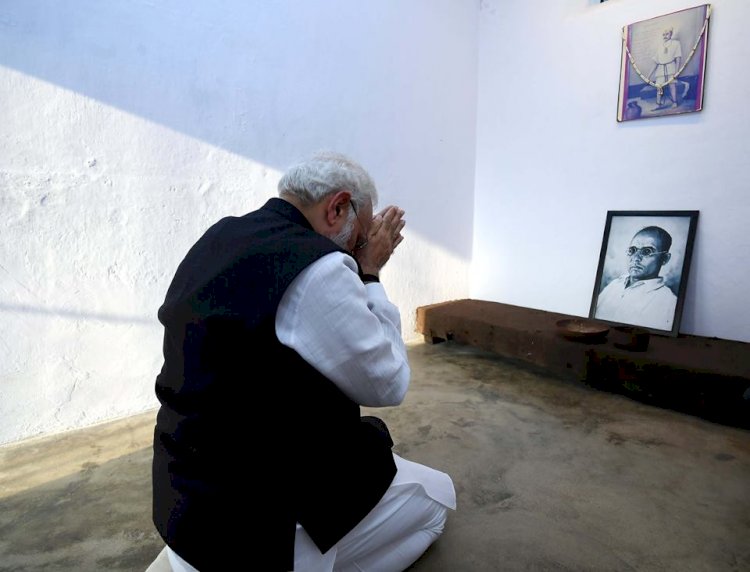 Savarkar made clemency petition to the British Government, Savarkar gave up anti-British activities; Savarkar collaborated with the British’: These have been the common propaganda of the present-day Congress and Congress-sponsored ‘left-liberals’ to discredit Hindu Nationalist movement in modern India, of which Savarkar is and always has been a towering icon. A study of contemporary historical data and material, which survived in spite of the Congressman onslaught tell a different story.

In this write-up, to expose the maliciously insinuated rhetoric perpetrated by the ‘secular-liberal’ block regarding Savarkar’s amnesty petitions, We should first elucidate the circumstantial backdrop of Savarkar’s amnesty petitions and his release, which, was demanded by contemporary political stalwarts as well as the Indian National Congress. In the later part, I shall present a brief exposure to my reader friends the assessment and estimation of Veer Savarkar, in the eyes of greatest stalwarts of India’s armed struggle for freedom as well as in the eyes of those who considered him to be the most dangerous person against their interests.

Before going into the issue of Veer Savarkar’s petitions for amnesty, I would like to mention Galileo Galilei, the exponent of modern astronomy, who preferred not to be burnt on a stake like his predecessor Giordano Bruno, and instead begged pardon from the Court of Inquisition, so that he could live to advance his ideas for the posterity. V. D. Savarkar, who was sentenced to the longest rigorous prison term (50 years) in India’s history and was categorized as ‘D (Dangerous) Prisoner’ by the British Home Department, was subjected to the most inhuman tortures at Cellular Jail including solitary confinement, standing handcuff, chain gauge, cross-bar fetters, apart from most straining labour like oil-milling.

As a visionary leader and a great strategist, Savarkar realized that languishing in jail shall not serve any purpose for his motherland but, his presence in the mainland as a free man shall do. This realization motivated Savarkar to seek amnesty from imprisonment at Cellular Jail, which, can be said strategically the most prudent decision. However, the breed of anti-Savarkar propagandists do not disclose in their propaganda-rhetoric the fact that Savarkar, in his petition for amnesty, had sought release not only of himself but all the political prisoners jailed at Andaman [2]. It will be immensely interesting for the common people and equally embarrassing for the Congress-boot-licking propaganda machinery (if that psychological faculty still exists in them) to know that Vithalbhai Patel, a leading national leader and the elder brother of Ballavbhai Patel, moved a resolution in the Central Legislative Assembly on 24th February 1920 seeking the release of Savarkar brothers from Cellular Jail. Bal Gangadhar Tilak also wrote a letter to Montague, British Home Secretary, seeking release of Savarkar brothers [3]. Even Gandhiji, Congress’s messiah of convenience, wrote in Young India that Savarkar brothers must be released [4].

I think the Congressmen won’t loose their mind now to question nationalist credentials of Bal Gangadhar Tilak, Vithalbhai Patel and Gandhiji . Rev. C. F. Andrews, (whose name graces a college at Kolkata and Andrews Palli at Shantiniketan) also demanded release of Savarkar brothers [5]. In March 1921, K.V. Rangaswamy Ayyangar, a prominent Congress leader and Member of the Council of State, moved a resolution seeking release of Savarkar brothers. However, in 1921 Savarkar was moved to the mainland India from Cellular jail as a prisoner and not a free citizen. He was first imprisoned at the Alipore Jail, Kolkata and then to Ratnagiri Jail. During his imprisonment at Ratnagiri Jail, the failure of Gandhiji’s misadventure with Khilafat movement and succeeding Moplah onslaught on thousands of Hindus in the Malabar Coast had awakened in the mind of Savarkar the need of Hindu identity politics and Hindu unification; and during this period he penned his immortal work ‘Hindutva’.

In 1923, at the third Ratnagiri District Political Conference, Savarkar’s unconditional release was demanded under the chairmanship of Vithalbhai Patel [6]. In 1923, the Indian National Congress at its Cocanada Session (38th Session), passed a resolution demanding release of Savarkar. Indira Gandhi, a stark opponent of Savarkar's political ideology, had also made a personal donation to the Savarkar Memorial Museum and released a commemorative postage stamp in Savarkar's memorial [6B] and Hirendra Nath Mukherjee, a renowned Communist leader and Member of Parliament proposed in the Parliament for paying homage to Savarkar on his demise[6C].

The aforesaid facts as documented and chronicled in the annals of India's history, clearly show that whatever malicious campaign the present-day Congress and their pet-commies may perpetuate, Savarkar’s prayer for amnesty was not only a prudent strategic move on his part but was also a demand of the nation including the contemporary political stalwarts within the Indian National Congress like Tilak, Bithalbhai Patel and even Gandhiji, Congress’s messiah at convenience.

Now, I would like to take on the peddlers of false propaganda regarding their allegation that Savarkar gave up opposition to the British Rule and collaborated with the British by calling upon Indians (Hindus) to enlist in the Armed Forces. However, whatever false-propaganda of the usurpers of India’s freedom for independence an ungrateful nation continues to digest about Savarkar, the British, as well as the Muslim League, clearly understood the real intention of Savarkar in exhorting Hindus to enlist in the armed forces. Sir Alfred Watson, the former editor of the Statesmen, Calcutta, in 1943 commented in Great Britain & the East that “For that domination, he (Savarkar) is prepared to fight and loudly demands that in recruiting for armies in India, the present rulers shall elect the majority of Hindus so that he may have an instrument to enforce his will” [7].

The Easter Times, a proclaimed Muslim League paper too, raised the alarm regarding Savarkar’s effort to steal a march upon Muslims’ monopoly in the armed forces and wrote that: “The Hindu Mahasabha has strongly agitated for the militarization of the Hindus as a great opportunity, and has met with astonishing success” [8]. Liaquat Ali Khan, the secretary of the All India Muslim League wrote a letter to Lord Mountbatten complaining militarization of the Hindus at the instance of Savarkar [9]. As such, in whatever malicious way the Congress and their boot-licking Indian Communists try to decry Savarkar’s effort to militarize Hindus to obtain military control, his intention was clearly understood by the British and the Muslim League alike, both of whom used to consider Savarkar to be the most dangerous man pitted against them in colonial India.

There is a lesser circulated fact which will intrigue any serious reader and researcher of India’s struggle for freedom. Netaji Subhas Chandra Bose, with whom Savarkar had some differences of opinion, suddenly travelled to Bombay and met Savarkar at his residence in a closed-door meeting on 22nd June 1940. This sudden and uncharted meeting of two prominent hardliners caused ripples in the British administration [10], who were informed later by Hindu Mahasabha that the meeting was regarding the prospect of a political alliance between Hindu Mahasabha and Forward Block. The curious facts in respect of this meeting was that this meeting took place on 22nd June 1940, i.e. barely six months before Netaji’s dramatic and meticulously pre-planned escape from India; and secondly, neither any close political aide of Savarkar or of Netaji were allowed to be present in the closed-door meeting, which is not only unprecedented but also absolutely strange beyond all proportions for political match-making meetings.

It is also to be noted that in the preceding year, Rash Behari Bose, the great revolutionary, the mastermind of the assassination attempt on Lord Hardinge and the Gadar uprising and the founder of Indian Independence League and the Azad Hind Fauz, published in Japanese the biography of V.D. Savarkar, addressing him as “The Rising Leader of New India” [11]. R.C. Majumder, internationally acclaimed as the doyen of Indian History, had described Savarkar as the ‘Great Revolutionary Leader’ [12].

I shall not waste any further word and reading-time of the readers, on the anti-Savarkar propaganda of the Congressmen of today and their bootlicking communist liars; Rather, I shall only quote what two of the greatest stalwarts of armed struggle for India’s freedom had spoken about Savarkar.

Rash Behari Bose strongly shared Savarkar's vision of a powerful Hindu nation beyond political boundaries for regional domination and was instrumental in setting up branches of Hindu Mahasabha in Japan, Burma, Java, Malaya. In a letter dated 11th July 1938, Rash Behari Bose wrote to Savarkar: "Every attempt should be made for creating a Hindu block extending from the Indian Ocean to the Pacific Ocean" [13]. In his radio talk, Rash Behari Bose addressed to Savarkar saying: “In saluting you, I have the joy of doing my duty towards my elderly comrade-in-arms. In saluting you, I am saluting the symbol of sacrifice itself” [14A]. In an article published in March and May 1939 issues of Great Asianism, Rash Behari Bose further extolled Veer Savarkar, saying: "Savarkar is a personification of heroism, valour, adventure and patriotism, and I admire his spirit of sacrifice. He has always carried the torch of India's independence since the beginning of the twentieth century. At present, he is calling for the establishment of the country based on the theory of cultural independence" [14B]

In his speech through Singapore Radio on 25th June 1944, Netaji Subhas Chandra Bose, alluded Savarkar, by saying: “When due to misguided political whims and lack of vision, almost all the leaders of the Congress Party are decrying all the soldiers in the Indian Army as mercenaries, it is heartening to know that Veer Savarkar is fearlessly exhorting the youth of India to enlist in the Armed Forces. These enlisted youth themselves provide us with trained men from which we draw the soldiers of our Indian National Army” [15].

I believe that even the foolest of the fools in the present-day Congress, in spite of great temptation, shall not have the courage and audacity to question the nationalist credentials of Rash Behari Bose and Netaji. However, I am not quite sure of any rabid hybrid from Lenin-Mao union