Prime Minister Manmohan Singh and National Security Advisor M. K. Narayanan felt that Shashi Tharoor's candidacy would demonstrate India's willingness to play a larger role at the United Nations. Shashi Tharoor finished second, behind Ban Ki-moon of South Korea, in each of the four straw polls conducted by the UN Security Council. In the final round, Ban emerged as the only candidate not to be vetoed by one of the permanent members, while Shashi Tharoor received one veto from the United States. 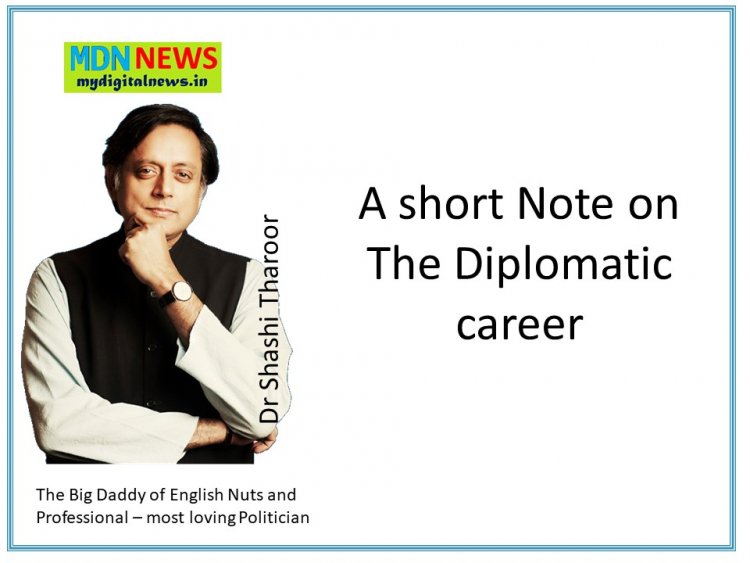 Shashi Tharoor's career in the United Nations began in 1978 as a staff member of the UN High Commissioner for Refugees (UNHCR) in Geneva. From 1981 until 1984 Shashi Tharoor was head of the UNHCR office in Singapore, during the boat people crisis, leading the organisation's rescue efforts at sea and succeeding in resettling a backlog of Vietnamese refugees. Shashi Tharoor also processed Polish and Acehnese refugee cases.

After a further stint at the UNHCR headquarters in Geneva, during which Shashi Tharoor became the first chairman of the staff elected by UNHCR personnel worldwide, Shashi Tharoor left UNHCR.

In 1989 Shashi Tharoor was appointed special assistant to the Under-Secretary-General for Special Political Affairs, the unit that later became the Peacekeeping Operations Department in New York. Until 1996, Shashi Tharoor led the team responsible for peacekeeping operations in the former Yugoslavia, spending considerable time on the ground during the civil war there.

Assistant Secretary and Under-Secretary-General at the UN -

During his tenure at the UNDPI, Shashi Tharoor reformed the department and undertook a number of initiatives, ranging from organizing and conducting the first-ever UN seminar on Antisemitism, the first-ever UN seminar on Islamophobia after the 11 September attacks, and launching an annual list of "Ten Under-Reported Stories the World Ought to Know about", which was last produced in 2008 by his successor.

On 9 February 2007, Shashi Tharoor resigned from the post of Under-Secretary-General and left the UN on 1 April 2007.

Shashi Tharoor finished second, behind Ban Ki-moon of South Korea, in each of the four straw polls conducted by the UN Security Council. In the final round, Ban emerged as the only candidate not to be vetoed by one of the permanent members, while Shashi Tharoor received one veto from the United States.

U.S. Ambassador John Bolton later revealed his instructions from Condoleezza Rice: "We don't want a strong Secretary-General." Shashi Tharoor was a protégé of the independently minded Kofi Annan, and a senior American official told Tharoor that the US was determined to have "No more Kofis."

After the vote, Shashi Tharoor withdrew his candidacy and declined Ban Ki-moon's invitation to remain in service beyond the expiry of his term as Under-Secretary-General.