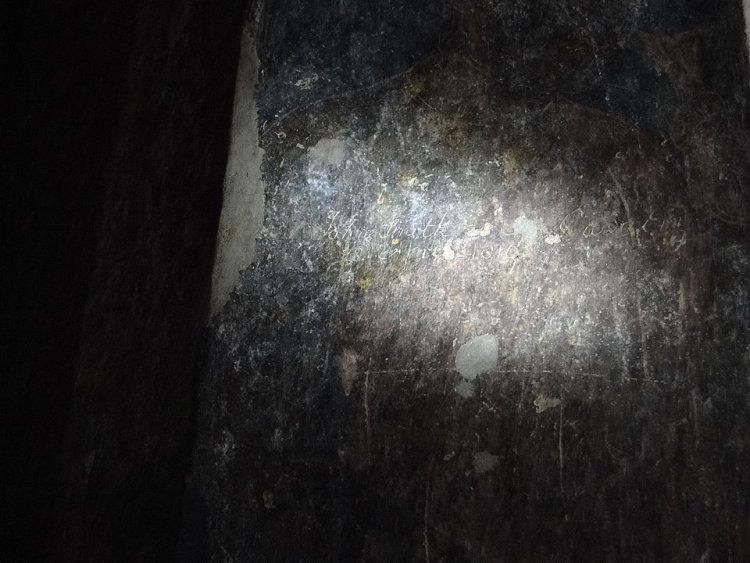 On 28 April 1819 a British officer named John Smith, of the 28th Cavalry, while hunting tigers discovered the entrance to Cave No. 10 when a local shepherd boy guided him to the location and the door.

The caves were well known by locals already. Captain Smith went to a nearby village and asked the villagers to come to the site with axes, spears, torches, and drums, to cut down the tangled jungle growth that made entering the cave difficult.

He then vandalised the wall by scratching his name and the date over the painting of a bodhisattva. Since he stood on a five-foot high pile of rubble collected over the years, the inscription is well above the eye-level gaze of an adult today. A paper on the caves by William Erskine was read to the Bombay Literary Society in 1822.

Within a few decades, the caves became famous for their exotic setting, impressive architecture, and above all their exceptional and unique paintings.

A number of large projects to copy the paintings were made in the century after rediscovery. In 1848, the Royal Asiatic Society established the "Bombay Cave Temple Commission" to clear, tidy and record the most important rock-cut sites in the Bombay Presidency, with John Wilson as president. In 1861 this became the nucleus of the new Archaeological Survey of India. During the colonial era, the Ajanta site was in the territory of the princely state of the Hyderabad and not British India.

In the early 1920s, Mir Osman Ali Khan the last Nizam of Hyderabad appointed people to restore the artwork converted the site into a museum and built a road to bring tourists to the site for a fee.

These efforts resulted in early mismanagement, states Richard Cohen, and hastened the deterioration of the site. Post-independence, the state government of Maharashtra built arrival, transport, facilities, and better site management. The modern Visitor Center has good parking facilities and public conveniences and ASI operated buses run at regular intervals from Visitor Center to the caves.

The Nizam's Director of Archaeology obtained the services of two experts from Italy, Professor Lorenzo Cecconi, assisted by Count Orsini, to restore the paintings in the caves.

The Director of Archaeology for the last Nizam of Hyderabad said of the work of Cecconi and Orsini: The repairs to the caves and the cleaning and conservation of the frescoes have been carried out on such sound principles and in such a scientific manner that these matchless monuments have found a fresh lease of life for at least a couple of centuries.

Despite these efforts, later neglect led to the paintings degrading in quality once again. Since 1983, Ajanta caves have been listed among the UNESCO World Heritage Sites of India.

The Ajanta Caves, along with the Ellora Caves, have become the most popular tourist destination in Maharashtra, and are often crowded at holiday times, increasing the threat to the caves, especially the paintings.

In 2012, the Maharashtra Tourism Development Corporation announced plans to add to the ASI visitor centre at the entrance complete replicas of caves 1, 2, 16 & 17 to reduce crowding in the originals, and enable visitors to receive a better visual idea of the paintings, which are dimly-lit and hard to read in the caves.