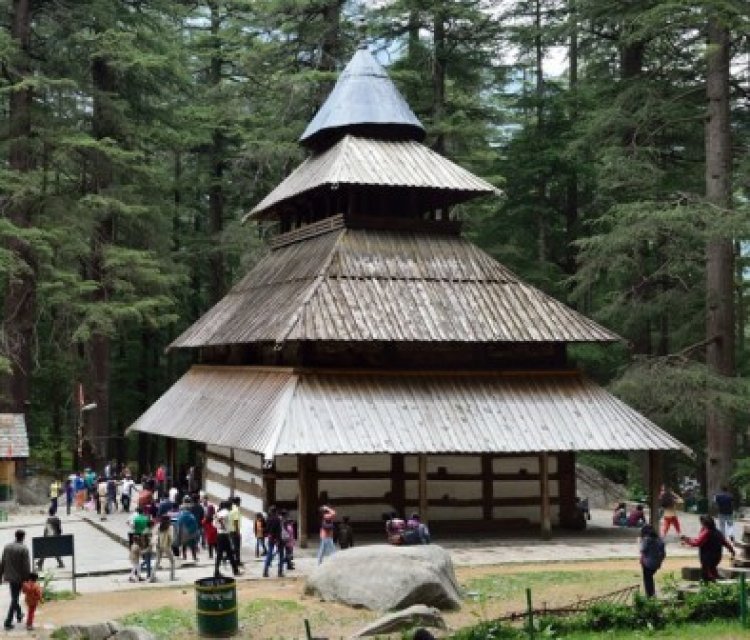 Hidimba Devi Temple, locally known as Dhungari Temple, also known variously as the Hadimba Temple, is located in Manāli, a hill station in the State of Himāchal Pradesh in north India. It is an ancient cave temple dedicated to Hidimbi Devi, wife of Bhima, a figure in the Indian epic Mahābhārata. The temple is surrounded by a cedar forest called Dhungiri Van Vihar at the foot of the Himālayas.

The sanctuary is built over a huge rock jutting out of the ground which was worshipped as an image of the deity. The structure was built in 1553 by Maharaja Bahadur Singh. by Ananya.b.s of 7A kvsap camp paroorkada.

The Hidimba Devi temple was built in 1553 CE by Maharaja Bahadur Singh. The temple is built around a cave where Devi Hidimba performed meditation. Hidimbi was supposed to have lived there with her brother Hidimba, and not much is known about their parents.

Born into a Rakshasa family, Hidimba vowed to marry one who would defeat her brother Hidimba, who was supposed to be very brave and fearless. During the Pandava's exile, when they visited Manali; Bhima, one of the five Pandavas, killed Hidimba.

The Hidimba Devi Temple has intricately carved wooden doors and a 24-meter-tall wooden "Shikhar" or tower above the sanctuary.

The tower consists of three square roofs covered with timber tiles and a fourth brass cone-shaped roof at the top. The earth goddess Durga forms the theme of the main door carvings.

The temple base is made out of whitewashed, mud-covered stonework. An enormous rock occupies the inside of the temple, only a 7.5 cm (3 inch) tall brass image representing goddess Hidimba Devi. A rope hangs down in front of the rock, and according to a legend, in bygone days religious zealots would tie the hands of "sinners" by the rope and then swing them against the rock.

The Indian epic Mahabharata narrates that the Pāndavas stayed in Himachal during their exile. In Manali, the strongest person there, named Hidimba and brother of Hidimba, attacked them, and in fight Bhima, strongest amongst the Pandavas, killed him.

Bhima and Hidimb's sister, Hidimbi, then got married and had a son, Ghatotkacha, (who later proved to be a great warrior in the war against Kauravas). When Bhima and his brothers returned from exile, Hidimbi did not accompany him, but stayed back and did tapasyā (a combination of meditation, prayer, and penance) so as to eventually attain the status of a goddess.

Manali Tourism - FAQs & Facts, A must Read Before trip to Manali

When Tilak tried to convince Mohandas Gandhi to leave the...