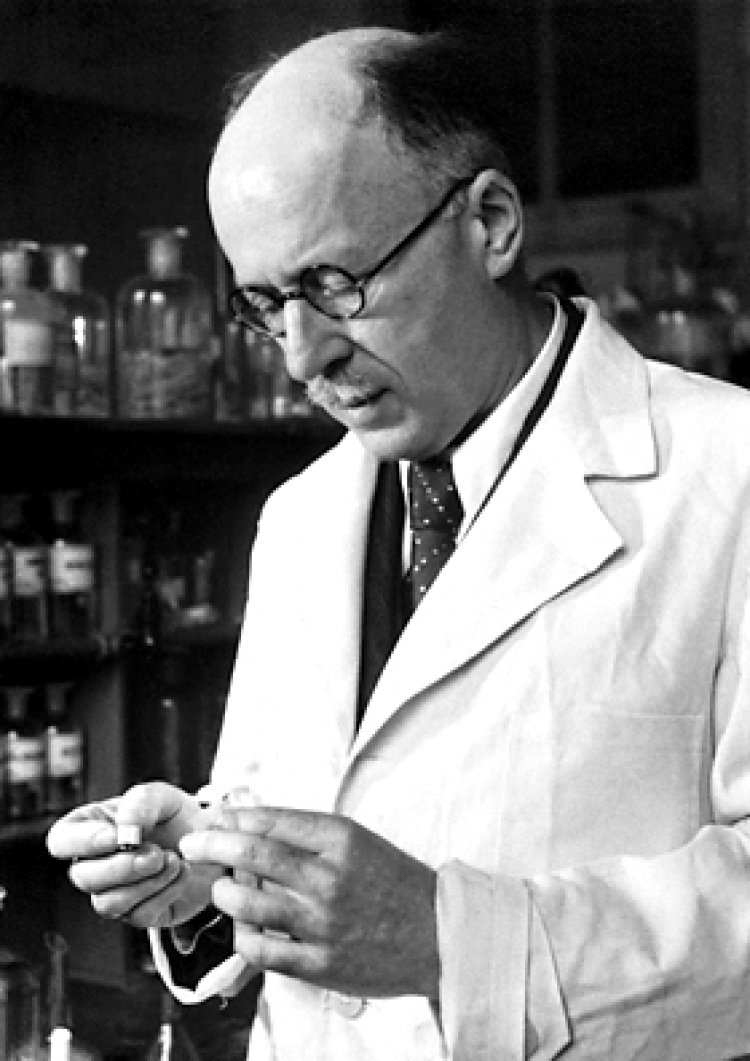 A testicular action was linked to circulating blood fractions – now understood to be a family of androgenic hormones – in the early work on castration and testicular transplantation in fowl by Arnold Adolph Berthold (1803–1861). Research on the action of testosterone received a brief boost in 1889, when the Harvard professor Charles-Édouard Brown-Séquard (1817–1894), then in Paris, self-injected subcutaneously a "rejuvenating elixir" consisting of an extract of dog and guinea pig testicle.

He reported in The Lancet that his vigor and feeling of well-being were markedly restored but the effects were transient, and Brown-Séquard's hopes for the compound were dashed. Suffering the ridicule of his colleagues, he abandoned his work on the mechanisms and effects of androgens in human beings.

In 1927, the University of Chicago's Professor of Physiologic Chemistry, Fred C. Koch, established easy access to a large source of bovine testicles — the Chicago stockyards — and recruited students willing to endure the tedious work of extracting their isolates. In that year, Koch and his student, Lemuel McGee, derived 20 mg of a substance from a supply of 40 pounds of bovine testicles that, when administered to castrated roosters, pigs and rats, re-masculinized them.

The group of Ernst Laqueur at the University of Amsterdam purified testosterone from bovine testicles in a similar manner in 1934, but the isolation of the hormone from animal tissues in amounts permitting serious study in humans was not feasible until three European pharmaceutical giants—Schering (Berlin, Germany), Organon (Oss, Netherlands) and Ciba (Basel, Switzerland)—began full-scale steroid research and development programs in the 1930s.

The Organon group in the Netherlands were the first to isolate the hormone, identified in a May 1935 paper "On Crystalline Male Hormone from Testicles (Testosterone)". They named the hormone testosterone, from the stems of testicle and sterol, and the suffix of ketone. The structure was worked out by Schering's Adolf Butenandt, at the Chemisches Institut of Technical University in Gdańsk.

Testosterone was identified as 17β-hydroxyandrost-4-en-3-one (C19H28O2), solid polycyclic alcohol with a hydroxyl group at the 17th carbon atom. This also made it obvious that additional modifications on the synthesized testosterone could be made, i.e., esterification and alkylation.

The partial synthesis in the 1930s of abundant, potent testosterone esters permitted the characterization of the hormone's effects, so that Kochakian and Murlin (1936) were able to show that testosterone raised nitrogen retention (a mechanism central to anabolism) in the dog, after which Allan Kenyon's group was able to demonstrate both anabolic and androgenic effects of testosterone propionate in eunuchoidal men, boys, and women.

The period of the early 1930s to the 1950s has been called "The Golden Age of Steroid Chemistry", and work during this period progressed quickly.

for updates and Corrections please comment here below or send us an email,

If you wish to Publish Articles like this Please Register and Start Writing . or send us Pressnote or Email to info@mydigitalnews.in or mydigitalnews.in@gmail.com

Testosteron and Medical use: the only

The Real Meaning of Endurance

What Everyone Must and Should know about the Diabetic foot