An 1870 photo of the gopurams in the temple town , Sri rangam , On a magnificent cot having a thousand heads spread out, worshipped and praised by many, in an islet surrounded by Kaveri with billowing waves, is the lying posture of the one who has Lakshmi sitting in his chest . - Silapadikaram (book 11, lines 35–40). According to other versions, the Muslim daughter followed the icon from Delhi to Srirangam on a horse, symbolizing that love brought back the icon after the war had taken it away. Beyond these legends, there was a more severe second invasion of South India including Srirangam between 1323 CE and 1327 CE by the armies of the Sultanate under Muhammad bin Tughluq.  The sanctum's Vishnu image with its jewelry was pre-emptively removed by the Hindus before the Delhi Sultanate troops reached Srirangam by a group led by the Vaishnavite Acharaya Pillai Lokacharyar to Tirunelveli in Tamil Nadu. 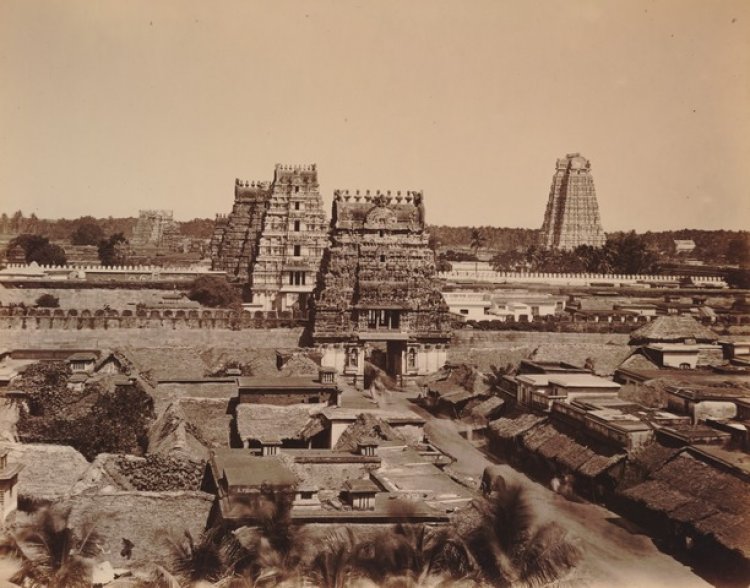 An 1870 photo of the gopurams in the temple town , Sri rangam

A temple at Srirangam is mentioned in Tamil literature of the Sangam era (6th century BCE to the 4th century CE), including the epic Silapadikaram (book 11, lines 35–40): The Temple was first Built by Dharma varma chola Then, Later Kaveri river flood destroyed the temple vimanam and later the Early Cholas King Killivalavan Rebuilt the temple complex present today. Beyond the ancient textual history, archaeological evidence such as inscriptions refer to this temple, but these stone inscriptions are from late 1st millennium CE.

The inscriptions in the temple belong to the Chola, Pandya, Hoysala and Vijayanagar dynasties who ruled over the region. These inscriptions range in date between the 9th and 16th centuries.

During the period of invasion and plunder by the Ala ud Din Khilji's Muslim general Malik Kafur and his Delhi Sultanate forces in 1311, the Arabic texts of the period state that he raided a "golden temple" on river "Kanobari" (Kaveri), destroyed the temple and took the plunder with the golden icon of the deity to Delhi. According to Steven P. Hopkins, this is believed to be the Ranganathaswamy Temple.

The Tamil texts that followed offer various inconsistent legends on how the temple regained the Vishnu icon. According to one found in Koil Oluku, a young girl had vowed to fast till she had seen the icon.[8] She followed the Muslim army as it returned with the loot back to Delhi. There she sneaked into the palace and saw that the Sultan's daughter had fallen in love with the image.

The young girl returned to Srirangam and told the priests about what she had seen in Delhi. The priests went with musicians to Delhi, found the icon in capriciously playful possession of the Sultan's daughter, day and night.

They sang and danced before the Sultan to return the icon, and he gave it back which upset his daughter. To console the daughter, the Sultan sent in his army again to bring it back, but this time they were not successful. According to other versions, the Muslim daughter followed the icon from Delhi to Srirangam on a horse, symbolizing that love brought back the icon after the war had taken it away.

Beyond these legends, there was a more severe second invasion of South India including Srirangam between 1323 CE and 1327 CE by the armies of the Sultanate under Muhammad bin Tughluq.  The sanctum's Vishnu image with its jewelry was pre-emptively removed by the Hindus before the Delhi Sultanate troops reached Srirangam by a group led by the Vaishnavite Acharaya Pillai Lokacharyar to Tirunelveli in Tamil Nadu.

The Goddess Ranganayaki (Lakshmi) was also taken away to another location by a separate group. The temple was defended and according to the Tamil tradition some 13,000 Sri Vaishnavas devotees of Srirangam, died in the fierce battle.

Thereafter, the image of Namberumal was brought back to Srirangam. Before then, for decades the deity and the priestly wardens wandered and secretly carried the temple's icon through villages of Tamil Nadu, Kerala and Karnataka. They finally went to the hills of Tirumala Tirupati, where they remained until the temple was rebuilt in 1371.

The icon was consecrated again according to the legends. This time, in memory of the first Sultan's daughter which tradition calls Thulukha Nachiyar, a niche in the temple was built for her. The niche shows her as a girl sitting on a horse that carried her to Delhi.

Her legend is still remembered. During contemporary processions when the icon is taken out of sanctum and then returned to it after its journey, Thulukha Nachiyar is dressed in Muslim garments and food offerings are made to her in the form of butter and chappathis (wheat bread).

Thereafter, under the Vijayanagara Empire, the temple site saw over 200 years of stability, repairs, the first round of fortifications, and the addition of mandapas. The Vishnu and Lakshmi images were reinstalled and the site became a Hindu temple again in 1371 CE under Kumara Kampana, a Vijayanagara commander and the son of Bukka I.

In the last decade of the 14th century, a pillared antechamber was gifted by the Vijayanagara rulers. In the 15th century, they coated the apsidal roofs with solid gold sheets, followed by financing the addition of a series of new shrines, mandapas and gopuras to the temple, according to George Michell.

After the destruction of the Vijayanagara in late 16th century, geo-political instability returned. The site became the focus of bitter wars between the Hindu Nayakas and the Muslim Mughals in the 17th century.

The Nayakas fortified the temple town and the seven prakaras. It was taken over by Muslim Nawabs of Arcot as a lucrative source of revenues, and thereafter attracted a contest between the French and British military powers.

Srirangam temple site and the neighboring city of Tiruchirappalli (Trichy) became an intense center of Christian and Muslim missionary activity during the 18th and 19th centuries.[38] With the establishment of the Madras Presidency within the British Empire, geo-political stability returned and the Ranganathaswamy Temple site attracted interest in archaeological and historical studies.

Sri Vaishnavism - The epigraphical evidence suggests that these Hindu dynasties — Cholas, Pandyas, Hoysalas, Nayaks, Vijayanagara – assisted with rebuilding, renovation and supported the traditional customs. Some mention substantial gifts to the temple. A Chola king, for example, presented the temple with a golden serpent couch. Some historians identify this king with Rajamahendra Chola.

The temple has witnessed and played a key role in the early Sri Vaishnavism history, particularly the centuries that followed the major Hindu philosopher Ramanuja (1017–1137 CE), and his predecessors Nathamuni and Yamunacharya.

It witnessed the debate between the Dvaita (dualistic) and Advaita (non-dualistic) sub-traditions within Vaishnavism. Centuries later, it was a key site in the debate and disagreements between the northern Tamil and southern Tamil traditions, also called the Vadakalai and Thenkalai.

The early rulers such as the Pallavas, Cholas and Pandiyas supported it as a hub of the Bhakti movement with a devotional singing and dance tradition, but this tradition stopped during the 14th century and was revived in a limited way much later.

An Eassy on Vijayanagara Empire in 30 Lines 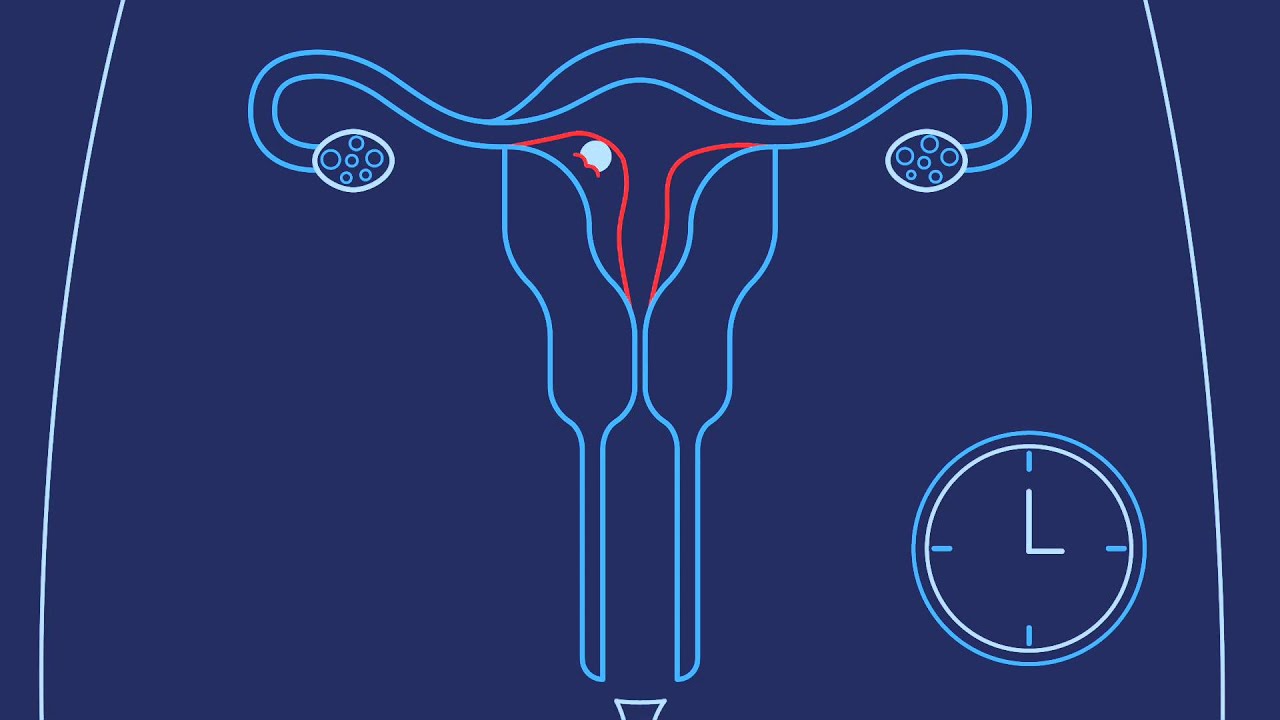 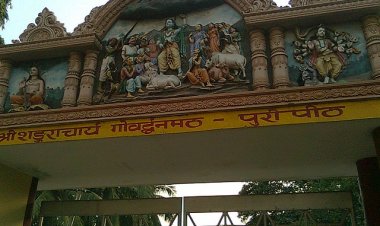