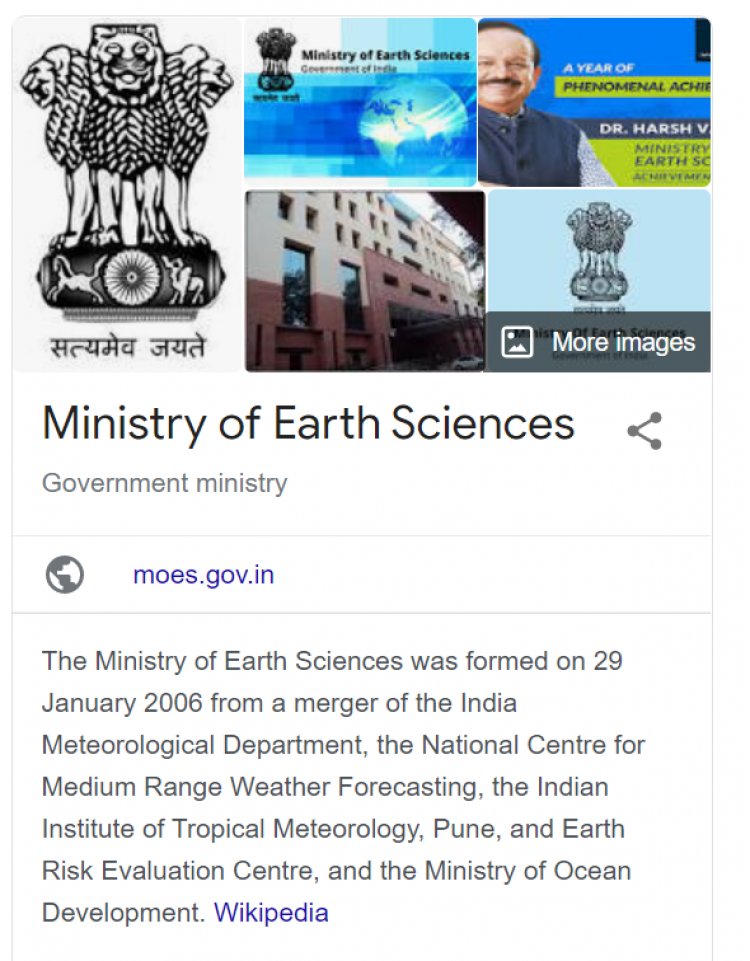 The Cabinet Committee on Economic Affairs chaired by Prime Minister Shri Narendra Modi has approved the proposal of the Ministry of Earth Sciences (MoES) on "Deep Ocean Mission", with a view to explore the deep ocean for resources and develop deep-sea technologies for sustainable use of ocean resources.

Deep Ocean Mission with is a mission mode project to support the Blue Economy Initiatives of the Government of India. Ministry of Earth Sciences (MoES) will be the nodal Ministry implementing this multi-institutional ambitious mission. The Deep Ocean Mission consists of the following six major components: Development of Technologies for Deep Sea Mining, and Manned Submersible: A manned submersible will be developed to carry three people to a depth of 6000 metres in the ocean with a suite of scientific sensors and tools.

Only a very few countries have acquired this capability. An Integrated Mining System will be also developed for mining Polymetallic Nodules from 6000 m depth in the central Indian Ocean. The exploration studies of minerals will pave way for the commercial exploitation in the near future, as and when commercial exploitation code is evolved by the International Seabed Authority, an UN organization.

This component will help the Blue Economy priority area of exploring and harnessing of deep sea minerals and energy. Development of Ocean Climate Change Advisory Services: A suite of observations and models will be developed to understand and provide future projections of important climate variables on seasonal to decadal time scales under this proof of concept component.

Deep Ocean Survey and Exploration: The primary objective of this component is to explore and identify potential sites of multi-metal Hydrothermal Sulphides mineralization along the Indian Ocean mid-oceanic ridges. This component will additionally support the Blue Economy priority area of deep-sea exploration of ocean resources.

Energy and freshwater from the Ocean: Studies and detailed engineering design for offshore Ocean Thermal Energy Conversion (OTEC) powered desalination plant is envisaged in this proof of concept proposal. This component will support the Blue Economy priority area of offshore energy development. Advanced Marine Station for Ocean Biology. This component is aimed at the development of human capacity and enterprise in ocean biology and engineering.

This component will translate research into industrial application and product development through on-site business incubator facilities. This component will support the Blue Economy priority area of Marine Biology, Blue trade and Blue manufacturing. The technologies required for deep-sea mining have strategic implications and are not commercially available.

Hence, attempts will be made to indigenous technologies by collaborating with leading institutes and private industries. A research vessel for deep ocean exploration would be built in an Indian shipyard which would create employment opportunities. This mission is also directed towards capacity development in Marine Biology, which will provide job opportunities in Indian industries.

In addition, the design, development and fabrication of specialised equipment, ships and setting up of required infrastructure are expected to spur the growth of the Indian industry, especially the MSME and startups. Oceans, which cover 70 per cent of the globe, remain a key part of our life. About 95 per cent of the Deep Ocean remains unexplored.

For India, with its three sides surrounded by the oceans and around 30 per cent of the country's population living in coastal areas, the ocean is a major economic factor supporting fisheries and aquaculture, tourism, livelihoods and blue trade.

Oceans are also the storehouse of food, energy, minerals, medicines, modulator of weather and climate and underpin life on Earth. Considering the importance of the oceans on sustainability, the United Nations (UN) has declared the decade, 2021-2030 as the Decade of Ocean Science for Sustainable Development. India has a unique maritime position.

Its 7517 km long coastline is home to nine coastal states and 1382 islands. The Government of India's Vision of New India by 2030 enunciated in February 2019 highlighted the Blue Economy as one of the ten core dimensions of growth.

Israeli Agro-Technology will be tailored to local conditions:Narendra Singh Tomar