Tharoor's parents returned to India when he was 2 years old, where he joined the Montfort School, Yercaud, in 1962, subsequently moving to Bombay (now Mumbai) and studying at the Campion School (1963–68). He spent his high school years at St. Xavier's Collegiate School in Kolkata (1969–71). 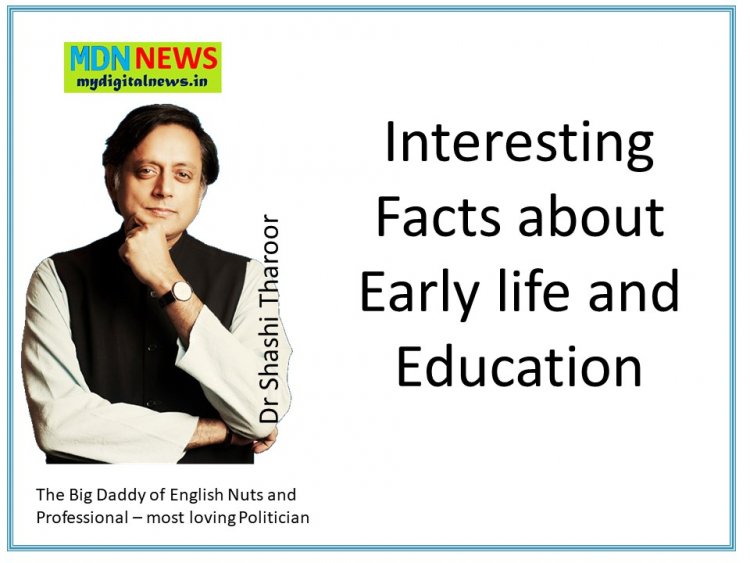 Shashi Tharoor was born on 9 March 1956 in London, United Kingdom to Chandran Tharoor and Sulekha Menon, a Malayali couple hailing from Palakkad, Kerala.

Tharoor has two younger sisters, Shobha and Smitha. His father, originally from Kerala, worked in various positions in London, Bombay, Calcutta and Delhi, including a 25-year career (culminating as group advertising manager) for The Statesman. His paternal uncle was Tharoor Parameshwaran, the founder of Reader's Digest in India.

Tharoor's parents returned to India when he was 2 years old, where he joined the Montfort School, Yercaud, in 1962, subsequently moving to Bombay (now Mumbai) and studying at the Campion School (1963–68). He spent his high school years at St. Xavier's Collegiate School in Kolkata (1969–71).

Shashi's paternal grandfather was Chippukutty Nair. In 1975, Tharoor graduated with a Bachelor of Arts degree in history from St Stephen's College, University of Delhi, where he had been president of the student union and also founded the St. Stephen's Quiz Club.

While he was pursuing his doctorate, Tharoor was awarded the Robert B. Stewart Prize for best student and was also the first editor of the Fletcher Forum of International Affairs. At the age of 22, he was the youngest person to receive a doctorate in the history of the Fletcher School.