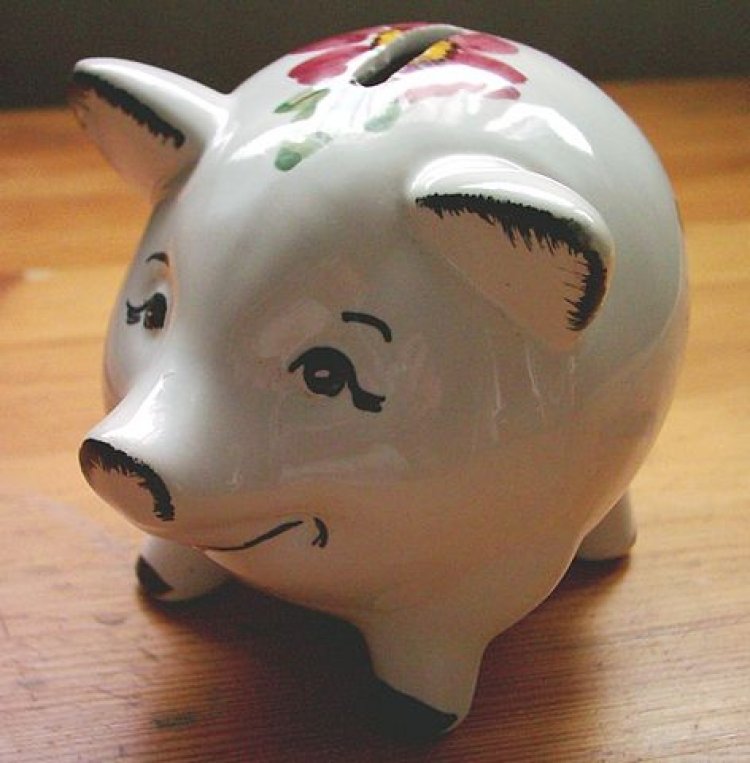 Piggy bank (sometimes penny bank or money box) is the traditional name of a coin container normally used by children. The piggy bank is known to collectors as a "still bank" as opposed to the "mechanical banks" popular in the early 20th century.

These items are also often used by companies for promotional purposes. The use of the name 'piggy bank' gave rise to its widely-recognized 'pig' shape, and many financial service companies use piggy banks as logos for their savings products. Piggy banks are usually made of ceramic or porcelain.

They are generally painted and serve as a pedagogical device to teach the rudiments of thrift and savings to children; money can be easily inserted. Many piggy banks have a rubber plug located on the underside; others are made of vinyl and have a removable nose for easy coin access. Some incorporate electronic systems which calculate the amount of money deposited. Some piggy banks do not have an opening besides the slot for inserting coins, which will lead to smashing the piggy bank with a hammer or by other means, to obtain the money within.

Origins An ancient greek money box from Priene, 2nd century BC. The oldest Western find of a money box dates from 2nd century BC Greek colony Priene, Asia Minor, and features the shape of a miniature Greek temple with a slit in the pediment. Money boxes of various forms were also excavated in Pompeii and Herculaneum, and appear quite frequently on late ancient provincial sites, particularly in Roman Britain and along the Rhine.

Pig-shaped money box: The earliest known pig-shaped money containers date to the 12th century on the island of Java. The Javanese term cèlèngan (literally "likeness of a wild boar", but used to mean both "savings" and "piggy bank") is also in the modern Indonesian language. A large number of boar-shaped piggy banks were discovered at the large archaeological site surrounding Trowulan, a village in the Indonesian province of East Java and possible site of the capital of the ancient Majapahit Empire.

There are a number of folk etymologies regarding the English language term "piggy bank," but in fact, there is no clear origin for the phrase, which dates only to the 1940s. It is believed that the popularity of the Western piggy banks originates in Germany, where pigs were revered as symbols of good fortune.[5] The oldest German piggy bank dates to the 13th century and was recovered during construction work in Thuringia. The earliest known use of "pig bank" in English is the 1903 book An American Girl in Mexico, which describes them as a Mexican souvenir. In Mexico, piggy banks are called alcancía, a term originating from Andalusian Arabic.

Uses: The general use of piggy banks is to store loose change in a quaint, decorative manner. Modern piggy banks are not limited to the likeness of pigs and may come in a range of shapes, sizes and colours. They are most commonly used by temples and churches because they are locked money boxes with a narrow opening to drop cash or coins. The box is opened via a plug underneath it at regular intervals when the collected money is counted and recorded.

Piggy banks in popular culture: Rachel, the unofficial mascot of Pike Place Market in Seattle, Washington, is a bronze cast piggy bank that weighs nearly 600 pounds (270 kg), located at the corner of Pike Place under the "Public Market Center" sign.

Rachel was designed by local artist Georgia Gerber. The Disney/Pixar animated franchise Toy Story features a character named Hamm, a wisecracking, animated piggy bank voiced by John Ratzenberger. The Price Is Right pricing game Any Number uses a piggy bank icon to represent the game's consolation prize, that amount in dollars and cents. Let's Make a Deal has a game, "Smash for Cash", in which a contestant asks announcer Jonathan Magnum to smash piggy banks.

A contestant who earns enough cash ($1, $2, or Zonks in each piggy bank) can win a cash bonus of $20,000, but cannot find both Zonks. In the version hosted by Monty Hall, one of the three doors in the day's Big Deal sometimes hid "Monty's Piggy Bank", which contained a cash award.

RSS and Hindu-Muslim relations A look Back

a goal, not a right, became Article 44 in the Constitution. It was widely criticised...

recent state assembly elections, lost but was sworn in as Trinamool Congress Party's...