Fundamental parts of the universe and are invisible, Subatomic particles that lack an electric charge, Belong to the category of leptons, Their mass is nearly zero, Most abundant particles but difficult to detect, They only interact via weak nuclear forces. Neutrino Observatories: IceCube and ANTARES which are located at the South Pole and the Mediterranean Sea, respectively. Detected for the first time in 1959, neutrinos are the second most abundant particles in the world (about a billion of them pass through a cubic centimetre of space every second), after photons, or the light particle. 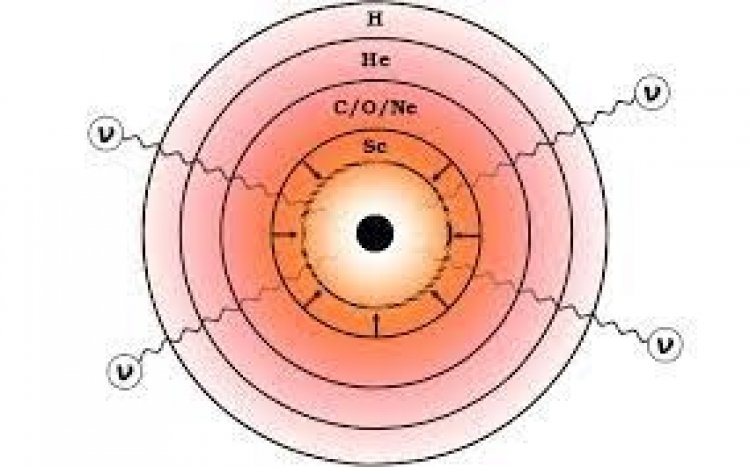 Proton, neutron, and electron are tiny particles that make up atoms. The neutrino is also a tiny elementary particle, but it is not part of the atom. Such particles are also found to exist in nature. Neutrino has a very tiny mass, no charge and spin half. It interacts very weakly with other matter particles. So weakly that every second trillions of neutrinos fall on us and pass through our bodies unnoticed.

Neutrinos come from the sun (solar neutrinos) and other stars, cosmic rays that come from beyond the solar system, and from the Big Bang from which our Universe originated. They can also be produced in the lab. Neutrinos come in three types or “flavours” – electron neutrino, tau neutrino and muon neutrino.

They can change from one flavor to another as they travel. This process is called neutrino oscillation and is an unusual quantum phenomenon. Neutrino oscillation was established by Sudbury Neutrino Observatory, Canada, and Super-Kamiokande experiment in Japan. They studied Solar neutrinos, atmospheric neutrinos and man-made neutrinos. The India-based Neutrino Observatory (INO) will study atmospheric neutrinos only. Solar neutrinos have much lower energy than the detector can detect.

How are atmospheric neutrinos produced in nature?

Atmospheric neutrinos are produced from cosmic rays which consist of protons and heavy nuclei. These collide with atmospheric molecules such as Nitrogen to give off pions and muons which further decay to produce neutrinos.

Why does INO need the mountain?

The mountain consists of 1km of solid rock that filters away most of the charged particles from the cosmic rays. The filtered set consist of a part of the incident cosmic ray protons and pions and practically all the neutrinos.

Why does the experiment have to be underground?

How will the Iron calorimeter detect the neutrinos?

The muon neutrino interacts with the iron to produce a muon which is electrically charged. This charge is picked up by sensors in the glass RPCs which set off an electrical pulse, to be measured by the electronics. By piecing together the pulses set off in successive glass plates, the path followed by the muon is tracked. This is used to infer the properties of the neutrino which caused the pulses.

Estimated time to construct the experiment: The detector has three modules. It is estimated to build one module per year, after completing the civil construction which can take up to 3-4 years.

100 years ago, when the electron was discovered, it had no foreseeable uses. Today, a world without electronics cannot be imagined. Hence basic sciences research is needed to understand the properties of particles before they can be applied.

What makes up the universe?

Light coming from distant stars can be studied by astronomers, for example, to detect new planets. Light is the visible part of the electromagnetic spectrum, other parts are used in for example radio astronomy. Likewise, if the properties of neutrinos are understood better, they can be used in astronomy to discover what the universe is made up of.

Probing Early Universe: Neutrinos interact very little with the matter around them, so they travel long distances uninterrupted. Since they take time to cross these distances, they are in effect uninterrupted for very long times. The extragalactic neutrinos we observe may be coming from the distant past. These inviolate messengers can give us a clue about the origin of the universe and the early stages of the infant universe, soon after the Big Bang.

Medical Imaging: Apart from direct future uses of neutrinos, there are technological applications of the detectors that will be used to study them. For instance, X-ray machines, PET scans, MRI scans, etc., all came out of research into particle detectors. Hence the INO detectors may have applications in medical imaging.

Typical fear no. 1: Radioactivity: “Radioactive leak shuts down neutrino study, Scientific American, June 5 2014. This led people to suppose (a) neutrinos can give radiation leaks; (b) Radioactive waste is buried near neutrino facilities.

Fact: The radiation leak was not from the neutrino detector EXO-200, but from a radioactive leak from an underground nuclear waste repository. Currently, the experiment is back to operation. Radiation of that kind will drown out and destroy the weak neutrino signal. This only goes to show that an underground nuclear waste repository cannot be built anywhere near a neutrino observatory.

Typical fear no. 2: Natural or manmade: Natural neutrinos are harmless, everyone knows millions of neutrinos pass through us every moment. But artificially produced “collimated” beams of neutrinos generate radiation and can cause diseases.

Fact: Collimated simply means the beams of neutrinos travel in parallel lines. And all that is called radiation, in scientific usage, is not harmful. Even visible light is a form of radiation.

Fact: Cerenkov radiation, is not ‘radiation’ from nuclear power plants or X-ray machines. It is just a tiny spark of electromagnetic radiation, given off by high energy charged particles such as electrons when they pass through water or other liquid. These have nothing to do with radioactive substances. Neutrinos cannot give Cerenkov radiation since they are not charged.

Typical fear no. 4: Magnet failure: The INO experiment houses the world’s largest magnet which will attract neutrinos. During a power failure, the neutrinos will be emitted out and can cause diseases. Fact: INO will have the world's largest electromagnet, that is, when the power is switched off, it is no longer a magnet. In addition, unlike most other magnets, the magnetic field is confined inside the magnet. There is hardly any magnetic field OUTSIDE the magnet. You can walk about with a metal watch or any other metal piece just outside and there will be no danger. This is in contrast to magnets in MRIs and such machines which may have permanent magnets inside. Further neutrinos are neutral particles that cannot be attracted by the magnets.

An India based Neutrino Observatory (INO) is going to be set up in Bodi West Hills, in the Theni district, Tamil Nadu. About : INO Project is a multi-institutional effort aimed at building a world-class underground laboratory with a rock cover of approx. 1200 m for Non-accelerator based high energy and nuclear physics research in India.

National Neutrino Collaboration group (NNCG): It includes more than 50 scientists from about 15 Institutes and Universities in India and is tasked with detailing various aspects related to INO activity and come up with a proposal for an underground neutrino laboratory. Funded by : Dept. of Atomic Energy (DAE) and the Dept. of Science and Technology  (DST).  Objectives: INO will observe neutrinos and antineutrinos produced in the atmosphere of the Earth. Over the years this underground facility is expected to develop into a full-fledged underground science laboratory for other studies in physics, biology, geology, hydrology etc.

Advantages: This observation will tell us more about the properties of neutrino particles, whose main source is the Sun and the Earth's atmosphere. This will also help in developing a model of physics beyond the so-called Standard Model of Particle Physics. The Standard Model of particle physics is the theory describing three of the four known fundamental forces (the electromagnetic, weak, and strong interactions, and not including the gravitational force) in the universe, as well as classifying all known elementary particles i.e. electrons, protons and neutrons. It would also have a great impact on diverse fields such as nuclear and particle physics, astrophysics and cosmology, medical imaging etc.

Issues Involved: The project was challenged before the National Green Tribunal (NGT) for adversely affecting the ecosystem of Western Ghats. However, it was granted environmental clearance by NGT. The villagers in the Pottipuram Panchayat (at Bodi West Hills) have been agitating against the proposed observatory under the banner of Poovulagin Nanbargal (Friends of the earth).