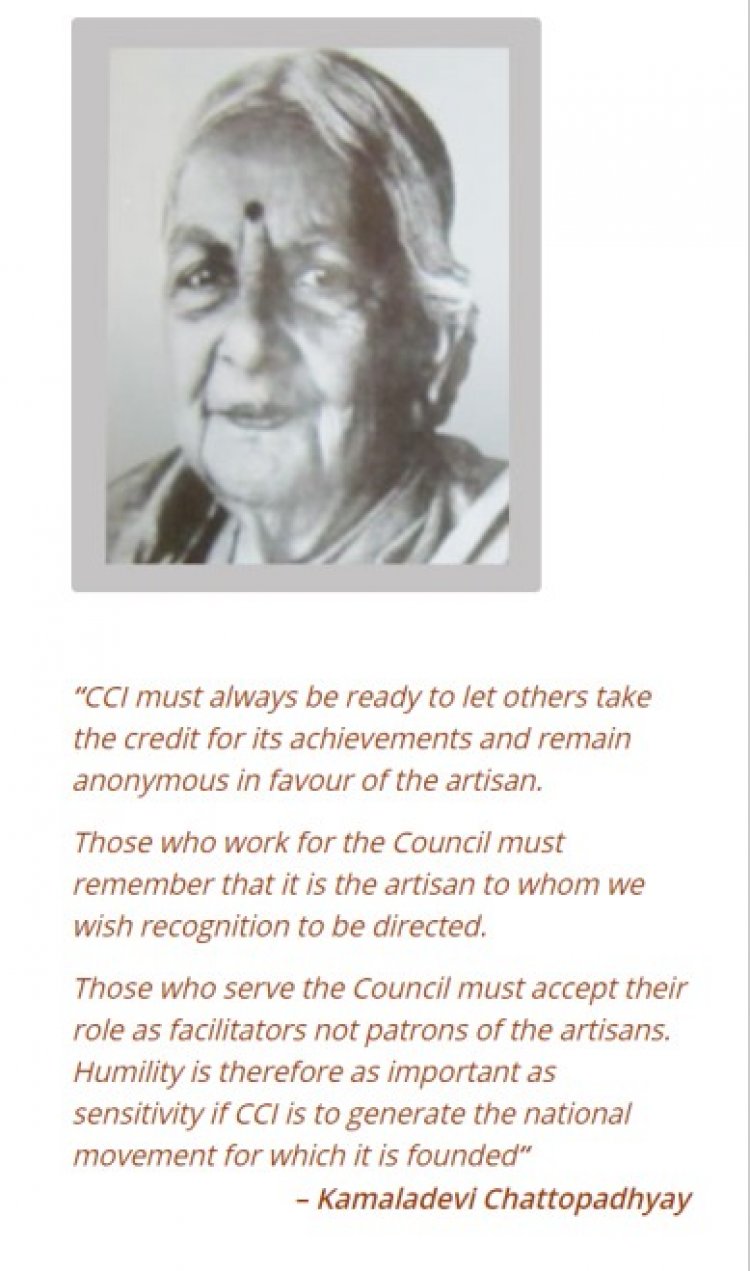 She was most remembered for her contribution to the Indian independence movement; for being the driving force behind the renaissance of Indian handicrafts, handlooms, and theatre in independent India; and for the upliftment of the socio-economic standard of Indian women by pioneering the cooperation.

Several cultural institutions in India today exist because of her vision, including the National School of Drama, Sangeet Natak Akademi, Central Cottage Industries Emporium, and the Crafts Council of India. She stressed the significant role which handicrafts and cooperative grassroots movements play in the social and economic upliftment of the Indian people.

She was conferred with Padma Bhushan and Padma Vibhushan by the Government of India in 1955 and 1987 respectively.

Born on 3 April 1903 in Mangaluru, Kamaladevi was the fourth and youngest daughter of her parents. Her father, Ananthayya Dhareshwar, was the District Collector of Mangalore, and her mother, Girijabai, from whom she inherited an independent streak, belonged to a land-owning Chitrapur Saraswat brahmana family from coastal Karnataka.

Kamaladevi's paternal grandmother was well-versed in the ancient Indian epics and Puranas, and Girijabai was also well-educated, although mostly home-tutored.

Together, their presence in the household gave Kamaladevi a firm grounding and provided benchmarks to respect for her intellect as well as her voice, something that she came to be known for in the future.

Kamaladevi was an exceptional student and also exhibited qualities of determination and courage from an early age. Her parents befriended many prominent freedom fighters and intellectuals such as Mahadev Govind Ranade, Gopal Krishna Gokhale, and women leaders like Ramabai Ranade, and Annie Besant.

This made young Kamaladevi an early enthusiast of the swadeshi nationalist movement. She studied about the ancient Sanskrit drama tradition of Kerala - Kutiyattam, from its greatest Guru and authority of Abhinaya, Nātyāchārya Padma Shri Māni Mādhava Chākyār by staying at the Guru's home at Killikkurussimangalam.

Tragedy struck early in life when her elder sister and best friend Saguna, whom she considered a role model, died in her teens, soon after her early marriage, and when she was just seven years old her father died as well.

To add to her mother Girijabai's trouble, he died without leaving a will for his vast property, so according to property laws of the times, the entire property went to her stepson (Kamaladevi's half brother), and they only got a monthly allowance. Girijabai defiantly refused the allowance and decided to raise her daughters on her dowry property.

Her rebellious streak was visible even as a child when young Kamaladevi questioned the aristocratic division of her mother's household and preferred to mingle with her servants and their children wanting to understand their life as well. She was a great freedom fighter.

First marriage and widowhood: She got married in 1917 at the age of 14, but was widowed two years later.

Meanwhile, studying in Queen Mary's College in Chennai, she came to know Suhasini Chattopadhyay, a fellow student and the younger sister of Sarojini Naidu, who later introduced Kamaladevi to their talented brother, Harin, by then a well-known poet-playwright-actor. It was their mutual interest in the arts, which brought them together.

Finally, when she was twenty years old, Kamaladevi married Harindranath Chattopadhyay, much to the opposition of the orthodox society of the times, which was still heavily against widow marriage.

Their only son Rama was born in the following year. Harin and Kamaladevi stayed together to pursue common dreams, which wouldn't have been possible otherwise, and in spite of many difficulties, they were able to work together, to produce plays and skits.

Later she also acted in a few films, in an era when acting was considered unsuitable for women from respectable families. In her first stint, she acted in two silent films, including the first silent film of the Kannada film industry, Mricchakatika (Vasantsena) (1931), based on the famous play by Shudraka, also starring Yenakshi Rama Rao, and directed by pioneering Kannada director, Mohan Dayaram Bhavnani.

In her second stint in films she acted in a 1943 Hindi film, Tansen, also starring K. L. Saigal and Khursheed, followed by Shankar Parvati (1943), and Dhanna Bhagat (1945). Eventually, after many years of marriage, they parted ways amicably. Kamaladevi broke a tradition by filing for divorce.

Shortly after their marriage, Harin left for London, on his first trip abroad, and a few months later Kamaladevi joined him, where she joined Bedford College, University of London, and later she received a diploma in Sociology

Call of the Freedom Movement

While still in London, Kamaladevi came to know of Mahatma Gandhi's Non-Cooperation Movement in 1923, and she promptly returned to India, to join the Seva Dal, a Gandhian organisation set up to promote social upliftment. Soon she was placed in charge of the women's section of the Dal, where she got involved in recruiting, training and organising girls and women of all ages women across India, to become voluntary workers, 'sevikas'.

In 1926, she met the suffragette Margaret E. Cousins, the founder of All India Women's Conference (AIWC), who inspired her to run for the Madras Provincial Legislative Assembly. Thus she became the first woman to run for a legislative seat in India. Though she could campaign for only a few days, she lost by a small margin of 55 votes.

In the following year, she became a founding member of the All-India Women's Conference (AIWC) and was its first Organizing Secretary. In the following years, AIWC grew up to become a national organisation of repute, with branches and voluntary programs run throughout the nation, and work steadfastly for legislative reforms. During her tenure, she travelled extensively to many European nations and was inspired to initiate several social reform and community welfare programs, and set up educational institutions, run for the woman, and by women. Another shining example in this series was the formation of Lady Irwin College for Home Sciences, of its kind college for women of its times, in New Delhi.

Later she was a part of the seven member lead team, announced by Mahatma Gandhi, in the famous Salt Satyagraha (1930), to prepare Salt at the Bombay beachfront, the only other woman volunteer of the team was Avantikabai Gokhale. Later in a startling move, Kamaladevi went up to a nearby High Court, and asked a magistrate present there whether he would be interested in buying the "Freedom Salt" she had just prepared.

On 26 January 1930 she gained widespread media attention when in a scuffle, she clung to the Indian tricolour to protect it

1940s When World War II broke out Kamaladevi was in England, and she immediately began a world tour to represent India's situation to other countries and drum up support for Independence after the war.

Independence of India brought Partition in its wake, and she plunged into the rehabilitation of the refugees. Her first task was to set up the Indian Cooperative Union to help with rehabilitation, and through the Union, she made plans for a township on cooperative lines. At length Jawahar Lal Nehru reluctantly gave her permission on the condition that she did not ask for state assistance, and so after much struggle, the township of Faridabad was set up, on the outskirts of Delhi, rehabilitating over 50,000 refugees from the Northwest Frontier. She worked tirelessly in helping the refugees to establish new homes and new professions; for this they were trained in new skills. She also helped set up health facilities in the new town.

Thus began the second phase of her life's work in rehabilitation of people as well as their lost crafts. She was considered singlehandedly responsible for the great revival of Indian handicrafts and handloom, in the post-independence era, and is considered her greatest legacy to modern India

Around this time she became concerned at the possibility that the introduction of Western methods of factory-based mass production in India as part of Nehru's vision for India's development would affect traditional artisans, especially women in the unorganised sectors. She set up a series of crafts museums to hold and archive India's indigenous arts and crafts that served as a storehouse for indigenous know-how. This included the Theater Crafts Museum in Delhi.

She equally promoted arts and crafts and instituted the National Awards for Master Craftsmen, and the culmination of her enterprising spirit led to the setting up of Central Cottage Industries Emporia throughout the nation to cater to the tastes of a nation, rising to its ancient glory.

In 1964 she started the Natya Institute of Kathak and Choreography (NIKC), Bangalore, under the aegis of Bharatiya Natya Sangh, affiliated to the UNESCO. Its present director is famous danseuse Maya Rao.

Chattopadhyay was a woman ahead of her times, she was instrumental in setting up the All India Handicrafts Board, she was also its first chairperson. The Crafts Council of India was also the first president of the World Crafts Council, Asia Pacific Region

Chattopadhyay also set up the National School of Drama and later headed the Sangeet Natak Akademi, and also a member of UNESCO. Her acclaimed autobiography, Inner Recesses and Outer Spaces: Memoir was published in 1986. She died on 29 October 1988 in Bombay, aged 85.

The Government of India conferred on her the Padma Bhushan in 1955, and the Padma Vibhushan in 1987, which are among the most revered civilian awards of the Republic of India. She was awarded the Ramon Magsaysay Award in 1966 for Community Leadership. In 1974, she was awarded the Sangeet Natak Akademi Fellowship, Ratna Sadasya, in recognition of her lifetime's work. The Fellowship is the highest award of Sangeet Natak Akademi, India's National Academy of Music, Dance and Drama

On 3 April 2018, on what would have been her 115th birthday, Google honoured her with a Doodle on their homepage.

Slavery and AllahUddhin Khilji: a Horror to human rights?