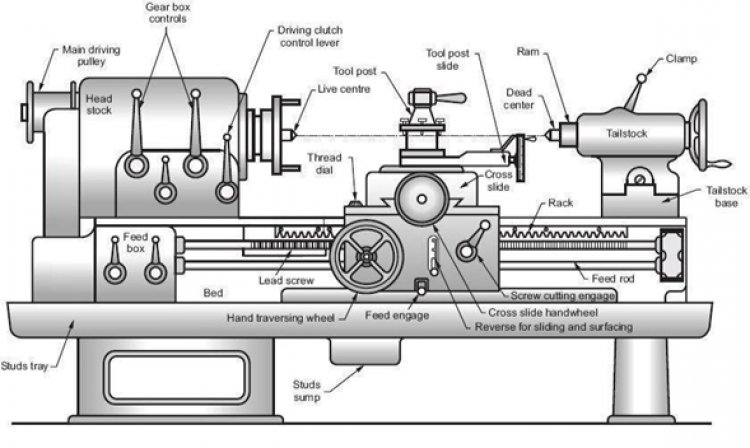 The lathe is one of the most versatile and widely used machine tools all over the world. It is commonly known as the mother of all other machine tools. The main function of a lathe is to remove metal from a job to give it the required shape and size. The job is securely and rigidly held in the chuck or in between centres on the lathe machine and then turn it against a single-point cutting tool which will remove metal from the job in the form of chips.

Speed lathe is the simplest of all types of lathes in construction and operation. It consists of a Bed, Headstock, Tailstock and Toolpost mounted on an adjustable slide. There is no feed box, leadscrew or conventional type of carriage. The tool is mounted on the adjustable slide and is fed into the work by hand control. The speed lathe finds applications where cutting force is least such as in woodworking, spinning, centring, polishing, winding etc.

The term “engine” is associated with this lathe due to the fact that in the very early days of its development it was driven by the steam engine. This lathe is an important member of the lathe family and is the most widely used. Similar to the speed lathe, the engine lathe has all the basic parts, e.g., bed, headstock, and tailstock. An engine lathe is shown in Fig. 4. Unlike the speed lathe, the engine lathe can feed the cutting tool both in the cross and longitudinal direction with reference to the lathe axis with the help of a carriage, feed rod and lead screw. The power may be transmitted by means of a belt, electric motor or through gears.

This is a small lathe usually mounted on a bench. It has practically all the parts of an engine lathe or speed lathe and it performs almost all the operations. This is used for small and precise work.

This lathe has features similar to an engine lathe but it is much more accurately built. It has a wide range of spindle speeds ranging from a very low to a quite high speed up to 2500 rpm. This lathe is mainly used for precision work on tools, dies, gauges and in machining work where accuracy is needed.

The distinguishing feature of this type of lathe is that the tailstock of an engine lathe is replaced by a hexagonal turret, on the face of which multiple tools may be fitted and fed into the work in proper sequence. Due to this arrangement, several different types of operations can be done on a job without re-setting of work or tools, and a number of identical parts can be produced in the minimum time.

These lathes are constructed for special purposes and for jobs, which cannot be accommodated or conveniently machined on a standard lathe. The wheel lathe is made for finishing the journals and turning the tread on a railroad car and locomotive wheels. The gap bed lathe, in which a section of the bed adjacent to the headstock is removable, is used to swing extra-large-diameter pieces.

These lathes are so designed that all the working and job handling movements of the complete manufacturing process for a job are done automatically. These are high speed, heavy-duty, mass production lathes with complete automatic control.

A simple lathe comprises a bed made of grey cast iron on which headstock, tailstock, carriage and other components of the Lathe Machine are mounted. Figure l shows the different parts of the engine lathe or central lathe.

The major parts of the lathe machine are given as under:

The bed of a lathe machine is the base on which all other parts of the lathe are mounted. It is a massive and rigid single piece casting made to support other active parts of the lathe. On the left end of the bed, the headstock of the lathe machine is located while on the right side tailstock is located. The carriage of the machine rests over the bed and slides on it. On the top of the bed, there are two sets of guideways - inner ways and waterways. The inner ways provide sliding surfaces for the tailstock and the outer ways for the carriage. The guideways of the lathe bed may be flat and inverted V shape. Generally cast iron alloyed with nickel and chromium material is used for manufacturing the lathe bed.

The main function of the headstock is to transmit power to the different parts of a lathe. It comprises the headstock casting to accommodate all the parts within it including gear train arrangement. The main spindle is adjusted in it, which possesses a live centre to which the work can be attached. It supports the work and revolves with the work, fitted into the main spindle of the headstock. The cone pulley is also attached to this arrangement, which is used to get various spindle speeds through an electric motor. The back gear arrangement is used for obtaining a wide range of slower speeds. Some gears called change wheels are used to produce different velocity ratios required for thread cutting.

Figure 5 shows the tailstock of a central lathe, which is commonly used for the objective of primarily giving an outer bearing and support the circular job being turned on centres. Tailstock can be easily set or adjusted for alignment or non-alignment with respect to the spindle

centre and carries a centre called the dead centre for supporting one end of the work. Both live and dead centres have 60° conical points to fit centre holes in the circular job, the other end tapering to allow for good fitting into the spindles. The dead centre can be mounted in ball bearing so that it rotates with the job avoiding friction of the job with the dead centre as it important to hold heavy jobs.

Carriage is mounted on the outer guideways of the lathe bed and it can move in a direction parallel to the spindle axis. It comprises important parts such as an apron, cross-slide, saddle, compound rest, and tool post. The lower part of the carriage has termed the apron in which there are gears to constitute an apron mechanism for adjusting the direction of the feed using the clutch mechanism and the split-half nut for the automatic feed.

The cross-slide is basically mounted on the carriage, which generally travels at right angles to the spindle axis. On the cross-slide, a saddle is mounted in which the compound rest is adjusted which can rotate and fix to any desired angle. The compound rest slide is actuated by a screw, which rotates in a nut fixed to the saddle. The tool post is an important part of the carriage, which fits in a tee slot in the compound rest and holds the tool holder in place by the tool post screw.

screw, depending on whether the lathe machine is being used for plain turning or screw cutting.

The feed gearbox contains a number of different sizes of gears. The feed gearbox provides a means to alter the rate of feed, and the ratio between revolutions of the headstock spindle and the movement of carriage for thread cutting by changing the speed of rotation of the feed rod or lead screw.

The apron is fitted to the saddle. It contains gears and clutches to transmit motion from the feed rod to the carriage, and the half nut which engages with the lead screw during cutting threads.

Methane in the plumes of Saturn's moon Enceladus: Possible...