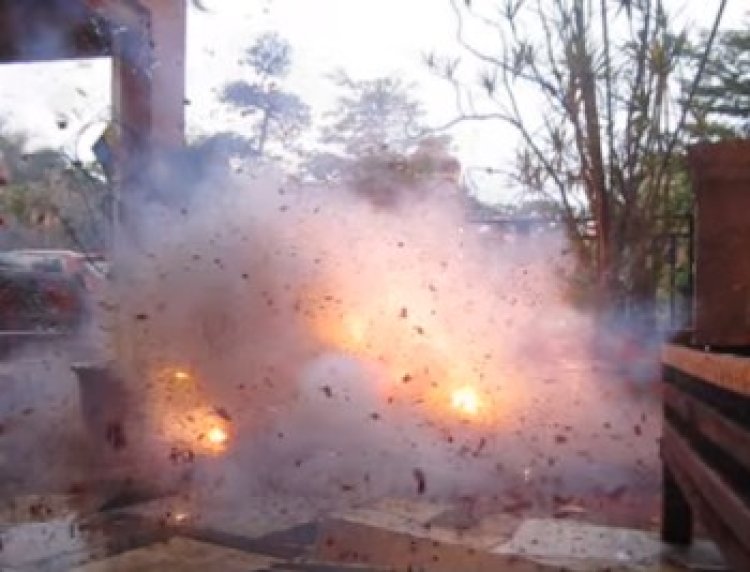 Celebrations: Firecrackers are commonly used in the celebration of holidays or festivals, such as Halloween, Independence Day (also known as the Fourth of July) in the United States, Diwali in India, Eid al-Fitr in Southeast Asia, Tihar in Nepal, Day of Ashura in Morocco, Guy Fawkes Night or Bonfire Night in the United Kingdom, Halloween in Ireland, Bastille Day in France, Spanish Fallas, in almost every cultural festival of Sri Lanka (e.g. Sri Lankan New Year), New Year's Eve and New Year's Day, and in the celebration of Chinese New Year by Chinese communities around the world. In Wales, the slang term for a firecracker, typically used on Guy Fawkes Night, is a "jacky-jumper".

These rules also require a permit from the local government, as well as any relevant local bodies such as maritime or aviation authorities (as relevant to the types of fireworks being used) and hospitals, schools, etc., within a certain range.

In most states and territories, firecrackers are illegal without a permit and part of a display by a licensed pyrotechnician. Tasmania, ACT and Northern Territory allow consumer use with a permit (dependent on calendar date). Northern Territory is the only part of Australia where a consumer does not require a permit, but this only applies on 1 July for Territory Day.

Firecrackers are not authorized under the Explosives Act, thus making importation, possession, transportation, storage, or manufacturing illegal in Canada. Canada banned firecrackers on 27 September 1972, after two children were killed and three others severely burned when some older children threw some firecrackers inside their tent. While it is rumoured that the children inside the tent had been smoking, this is unsubstantiated and makes no sense considering the firework ban by authorities. Fireworks are still legal to buy for anyone 18 years of age or over.

The use of firecrackers is regulated by the Law on Explosive Substances and the Production and Trading of Weapons (Croatian: Zakon o eksplozivnim tvarima te proizvodnji i prometu oružja). According to the Law, firecrackers (including other pyrotechnic articles) are divided into three classes: Class 1 Pyrotechnics - pyrotechnic articles for fireworks which represent a very low risk, have negligible noise level and are intended for use in restricted areas, including fireworks intended for use within residential buildings; Class 2 and 3 Pyrotechnics - pyrotechnic articles for fireworks which represent low to medium risk, have medium to high noise level and are intended for outdoor use in restricted areas and large open areas.

Class 1 Pyrotechnics can be sold all year round to people over the age of 14 in general stores and newsstands, while

Class 2 and 3 Pyrotechnics can only be sold between 15 December and 1 January each year at gun shops and stores with special permits to the people over the age of 14 (class 2) or over the age of 18 (class 3).

Use of Class 2 and 3 Pyrotechnics is allowed only in the period between 27 December and 1 January.

As of 2008, most urban areas in mainland China permit firecrackers. In the first three days of the traditional New Year, it is a tradition that people compete with each other by playing with firecrackers. However, many urban areas banned them in the 1990s. For example, they were banned in Beijing's urban districts from 1993 to 2005. In 2004, 37 people were killed in a stampede when four million people gathered for a rumored Lantern Festival firework display in nearby Miyun. Since the ban was lifted, the firecracker barrage has been tremendous. An unusual[clarification needed] feature is that many residents in major cities look down on street-level fireworks from their tower blocks. Bans are rare in rural areas.

Fire Crackers in the Czech Republic

Firecrackers are legal in the Czech Republic.

Fireworks are classified. Some fireworks are restricted to adults (18 years), may be sold to private persons only on three days before Silvester and may be used only on Silvester or New Year (special permits can be obtained to use these on other days of the year). Other fireworks have no such restrictions, however, they are not recommended for children below 12 years and guidance by adults is advised. Certain fireworks are available only to professionals.

Firecrackers sold to consumers are restricted to 0.95 grams of black powder. The ban on larger firecrackers went into effect in 1996. Before, mid-size kiinanpommi or kiinari ("Chinese bomb") and tykinlaukaus and large tykäri ("artillery shot") had become cheap and common products that were often used by children after the celebration, leading to accidents.

Fireworks are banned for security reasons, as some speculate a connection between firework use and the 1967 Leftist Riot. However, the government stages a fireworks display in Victoria Harbour for New Year countdown and the second day of the Chinese New Year.

Firecrackers are banned in Hungary since 2005. However, they are legal in Slovakia and people smuggle them.

Phuljhari sparklers popular with children on Diwali nights Firecrackers are easily available in India and are used to mark a celebratory event. They are legal, and anyone 18 and over can buy them without a licence. Diwali fireworks are a family event in many parts of India. People light up fireworks near their homes and in streets. Additionally, cities and communities have community fireworks. This custom may have begun on the Indian subcontinent after 1400 CE when gunpowder started being utilised in Indian warfare. India's first fireworks factory was established in Calcutta during the 19th century.

In October and November, farmers from Punjab and Haryana burn agricultural waste and the weather tends not to be windy, so Delhi's air pollution usually increases, which has been a major environmental problem since 2002. Firecrackers for the Diwali holiday can worsen this pollution. In October 2017, the Supreme Court banned firecrackers in Delhi, as a result of which the industry said it faced losses of Rs 1,000-crore and consequently layoffs.

After India's National Green Tribunal (NGT) ordered a ban in the NCR region on the sale and use of crackers in 2020, the Council for Scientific and Industrial Research (CSIR) developed "green crackers" that used less polluting raw materials. Several states in India have either banned firecrackers or limited the time, noise level and type (mandatory use of less polluting firecrackers) that can be used.[6] Nonetheless, many firecrackers were used to celebrate the Diwali holiday in 2020, immediately after which Delhi's air pollution was over 9 times the level that the World Health Organization considers safe.

Firecrackers and fireworks are generally forbidden in public during the Chinese New Year, especially in areas with significant non-Chinese populations, to avoid conflict between the two. However, there are some exceptions. The usage of firecrackers is legal in some metropolitan areas such as Jakarta and Medan, where the degree of racial and cultural tolerance is higher.

Fireworks and firecrackers are not permitted in the Republic of Ireland; however, many people smuggle them from Northern Ireland, where they are legal. They are most common around Halloween. Irish anti-firecracker laws are considered among the strictest in the world, equal to Chile's.

Banned in Minor Offences Act 1955 and Explosives Act 1957. However, many Malaysians smuggle them from Thailand and the Philippines.

The government of Norway banned rockets in early 2009. Other types of fireworks are still allowed.

Fire Crackers in the Philippines

Fireworks and firecrackers are widely available throughout the Philippines and both Republic Act 7183 and Executive Order 28 were enacted to regulate and to control the sale, distribution, manufacture and use of firecrackers for public safety. Under Republic Act 7183, there are certain firecrackers that are legal such as Judas' belt and the prohibition of a certain firecracker and pyrotechnic devices shall be determined by the Director-General of the Philippine National Police. Although, there are cities in the Philippines banning all kinds of firecrackers and those cities are Muntinlupa (since 2013), Olongapo (since 2008) and Davao City (since 2001). Injuries involving the use or ingestion of "Piccolo" sticks account for the majority of firecracker-related incidents in the country.

However, in December 2020, firecrackers were banned in some areas of Metro Manila to prevent injuries and avoid mass gatherings in the region due to the COVID-19 pandemic. For example, Mayor Joy Belmonte of Quezon City said that fireworks and firecracker use is strictly prohibited in basketball courts, streets and public spaces, and can only be used in designated firecracker zones. Some provinces and municipalities outside of Metro Manila also imposed a firecracker ban to make sure that minimum health protocols will be observed during the new year celebration.

A partial ban on firecrackers was imposed in March 1970 after a fire killed six people and injured 68. This was extended to a total ban in August 1972, after an explosion that killed two people. and an attack on two police officers attempting to stop a group from letting off firecrackers in February 1972.

However, in 2003, the government allowed firecrackers to be set off during the festive season. At the Chinese New Year light-up in Chinatown, at the stroke of midnight on the first day of the Lunar New Year, firecrackers are set off under controlled conditions by the Singapore Tourism Board. Other occasions where firecrackers are allowed to be set off are determined by the tourism board or other government organizations. However, their sale is not allowed.

Firecrackers have been banned in urban areas of Taiwan since 2008, but are still allowed in rural areas.

Fire Crackers in the United Kingdom

In 1997, firecrackers became illegal, but most other consumer fireworks are legal.

Fire Crackers in the United States

In 2007, New York City lifted its decades-old ban on firecrackers, allowing a display of 300,000 firecrackers to be set off in Chinatown's Chatham Square. Under the supervision of the fire and police departments, Los Angeles regularly lights firecrackers every New Year's Eve, mostly at temples and the shrines of benevolent associations. The San Francisco Chinese New Year Parade, the largest outside China, is accompanied by numerous firecrackers, both officially sanctioned and illicit.

In 1994, the Government of Vietnam decided to ban firecrackers nationwide. Only fireworks displays produced and performed by the government are permitted.

when you meet Dr Shashi Tharoor, you will be dumbstruck knowing he's not only kind,...