Ministry of Co-operation: A New Push to Co-operatives: initiative of Government of India

Recently, a separate ‘Ministry of Co-operation’ has been created by the Central Government for realizing the vision of ‘Sahkar se Samriddhi’ (Prosperity through Cooperation) and to give a new push to the cooperative movement. The Government has signalled its deep commitment to community-based developmental partnerships. It also fulfils the budget announcement made by the Finance Minister in 2021. 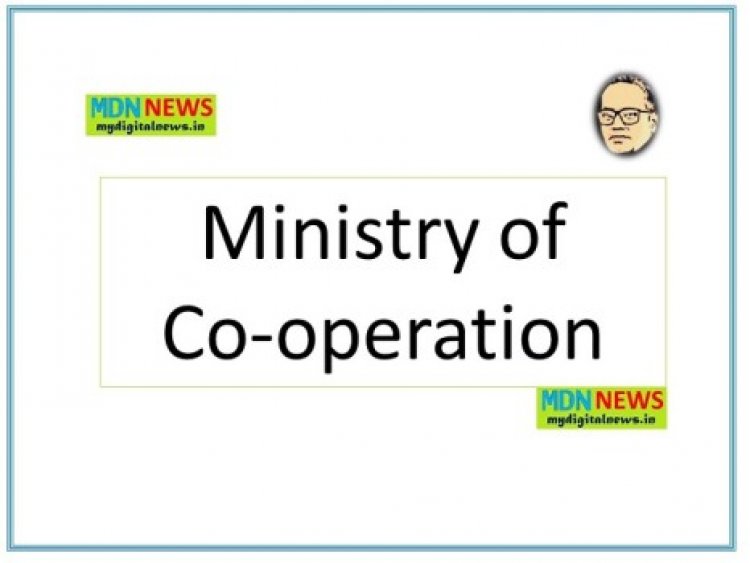 The Ministry of Co-operation is a ministry under the Government of India which was formed in July 2021.

The ministry provides a separate administrative, legal and policy framework for strengthening the cooperative movement in the country.

The ministry's creation was announced on 6 July 2021 along with its vision statement of Sahkar se samriddhi (transl. Prosperity from cooperation).

The ministry works in strengthening co-operatives at the grass-root level, working to streamline processes for 'Ease of doing business' for co-operatives and enabling the development of Multi-State Co-operatives (MSCS).

The same was initially announced by Finance Minister Nirmala Sitharaman while presenting the 2021 Union budget.

Significance of Ministry of Co-operation: It will provide a separate administrative, legal and policy framework for strengthening the cooperative movement in the country.

It will help deepen Co-operatives as a true people-based movement reaching up to the grassroots. It will work to streamline processes for ‘Ease of doing business’ for co-operatives and enable the development of Multi-State Co-operatives (MSCS).

According to the International Labour Organisation (ILO), a cooperative is an autonomous association of persons united voluntarily to meet their common economic, social and cultural needs and aspirations through a jointly-owned and democratically-controlled enterprise.

The United Nations General Assembly had declared the year 2012 as the International Year of Cooperatives.

India is an agricultural country and laid the foundation of the World’s biggest cooperative movement in the world. In India, a Co-operative based economic development model is very relevant where each member works with a spirit of responsibility.

The word “cooperatives” was added after “unions and associations” in Article 19(1)(c) under Part III of the Constitution. This enables all the citizens to form cooperatives by giving it the status of fundamental right of citizens.

A new Article 43B was added in the Directive Principles of State Policy (Part IV) regarding the “promotion of cooperative societies”.

The Cooperatives were first started in Europe and the British Government replicated it in India to mitigate the miseries of the poor farmers, particularly harassment by moneylenders.

The term Cooperative Societies came into existence when the farmers of Pune and Ahmednagar (Maharashtra) spearheaded an agitation against the money lenders who were charging exorbitant rates of interest.

The first credit cooperative society was formed in Banking in 1903 with the support of the Government of Bengal. It was registered under the Friendly Societies Act of the British Government.

But the enactment of the Cooperative Credit Societies Act, 1904 gave Cooperative a definite structure and shape. In 1919, cooperation became a provincial subject and the provinces were authorised to make their own cooperative laws under the Montague-Chelmsford Reforms.

The categorization carried on to the Government of India Act, 1935.

After independence, cooperatives became an integral part of Five-Year Plans. In 1958, the National Development Council (NDC) had recommended a national policy on cooperatives and also for training of personnel and setting up of Co-operative Marketing Societies. National Cooperative Development Corporation (NCDC), a statutory corporation, was set up under National Cooperative Development Corporation Act, 1962. In 1984, Parliament of India enacted the Multi-State Cooperative Societies Act to remove the plethora of different laws governing the same types of societies. The Government of India announced a National Policy on Co-operatives in 2002.

It provides agricultural credits and funds where state and private sectors have not been able to do very much. It provides strategic inputs for the agricultural-sector; consumer societies meet their consumption requirements at concessional rates. It is an organization for the poor who wish to solve their problems collectively.

It softens the class conflicts and reduces the social cleavages. It reduces the bureaucratic evils and follies of political factions; It overcomes the constraints of agricultural development; It creates a conducive environment for small and cottage industries.

Mismanagement and Manipulation: A hugely large membership turns out to be mismanaged unless some secure methods are employed to manage such co-operatives. In the elections to the governing bodies, money became such a powerful tool that the top posts of chairman and vice-chairman usually went to the richest farmers who manipulated the organization for their benefits.

People are not well informed about the objectives of the Movement, rules and regulations of co-operative institutions.

Most of these societies are confined to a few members and their operations extended to only one or two villages.

Functional Weakness: The Co-operative Movement has suffered from the inadequacy of trained personnel. Way Forward New areas are emerging with the advancement of technology and cooperative societies can play a huge role in making people familiar with those areas and technologies.

The principle of the cooperative movement is to unite everyone, even while remaining anonymous.

The cooperative movement has the capacity to solve people’s problems. However, there are irregularities in cooperatives and to check them there have to be rules and stricter implementation.

To strengthen the cooperatives there should be market linkages for agricultural farmers as well as cooperative societies.