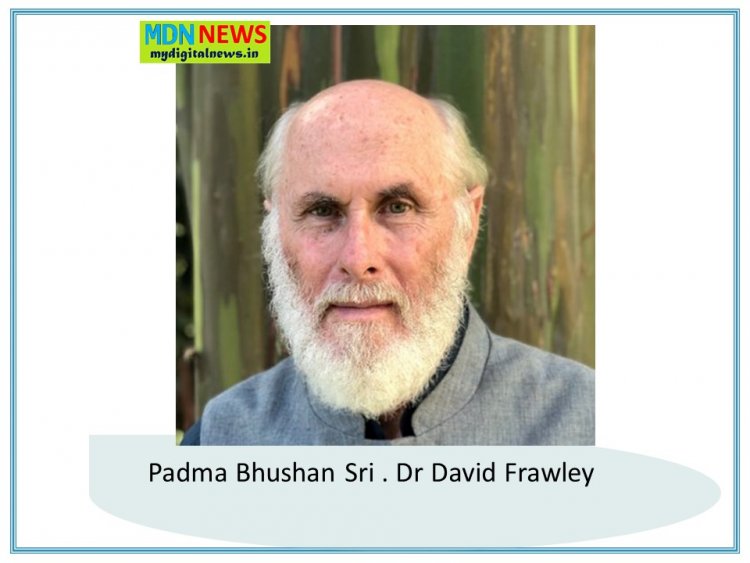 David Frawley (born 1950) is an American Hindu teacher (acharya) and a Hindutva author. He has written numerous books on topics spanning the Vedas, Hinduism, Yoga, Ayurveda and Vedic astrology.

His works have been popular among the common masses. In 2015 he was honoured by the Government of India with the Padma Bhushan, the third-highest civilian award in India.

Modern physics reveals the wonders of outer space, extending beyond the galaxies. Yoga and Vedanta reveal the wonders of inner space, the space of Consciousness (Chidakasha) pervading and transcending the universe, an even greater wonder and within us.

He has been described as a prominent figure of the Hindutva movement and numerous scholars have also described him as a Hindutva ideologue and apologist. David Frawley has been widely accused of practising historical revisionism.

David Frawley was born to a Catholic family in Wisconsin and had nine siblings. Though largely an autodidact, Frawley studied under Dr. B. L. Vashta of Mumbai for a span of about a decade and had also obtained a Doctor of Oriental Medicine degree via a correspondence course from the International Institute of Chinese Medicine, Santa Fe, New Mexico.

In 2000, in his book How I Became a Hindu: My Discovery of Vedic Dharma, Frawley details his move from a Catholic upbringing to embracing Hinduism and Vedic knowledge. David Frawley discovered the Vedas through the work of Sri Aurobindo around 1970 as part of his examination of Yoga and Vedanta.

David Frawley's first published translations of hymns from the Rigveda occurred in 1980-1984 in various Sri Aurobindo Ashram journals, under the auspices of M.P. Pandit. His article "Vedic Mysticism brought me into Hinduism" occurs in the book How to Become a Hindu from the Himalayan Academy.

In 1991, under the auspices of the Hindu teacher Avadhuta Shastri, he was named Vamadeva Shastri after the Vedic Rishi Vamadeva. In 1996, David Frawley has conferred the title of Pandit along with the Brahmachari Vishwanathji Award in Mumbai, India. He carries on the work of Kavyakantha Ganapati Muni, the chief disciple of Bhagavan Ramana Maharshi.

Works on Hinduism and Vedic Studies by David Frawley

Frawley is the founder and the sole instructor at the American Institute of Vedic Studies at Santa Fe, New Mexico and is a former President of the American Council of Vedic Astrology.

Vamadeva Shastri has studied, written and taught extensively in the field of Ayurveda, starting with his work with Vasant Lad in 1983. He works with multiple Ayurvedic institutions including:

He was one of the first Americans to receive the title of "Jyotish Kovid" from the Indian Council of Astrological Sciences (ICAS) in 1993, followed by “Jyotish Vachaspati” in 1996. He was the founder and first president of the American Council of Vedic Astrology (ACVA) from 1993-2003.

In books such as The Myth of the Aryan Invasion of India and In Search of the Cradle of Civilization, Frawley criticizes the 19th-century racial interpretations of Indian prehistories, such as the theory of a conflict between invading caucasoid Aryans and Dravidians.

In the book In Search of the Cradle of Civilization (1995), Frawley along with Georg Feuerstein and Subhash Kak has rejected the Aryan Invasion Theory and supported the Indigenous Aryans theory.

He often publishes in pro-Hindutva vernacular newspapers in the UK and is a strong advocate of the Hindu Holocaust hypothesis. Frawley rejects the Indo-Aryan migration theory in favour of the Indigenous Aryans theory; accusing his opponents of having a “European missionary bias”.

Martha Nussbaum and others consider him to be the most determined opponent in this regard. In The Myth of the Aryan Invasion of India, Frawley has criticized the 19th-century racial interpretations of Indian prehistory and rejects the theory of a conflict between invading caucasoid Aryans and Dravidians.

In the sphere of market economics, Frawley opposes socialism, stating that such policies have reduced citizens to beggars.

How To Prepare for Indian Army Rally and Written Test ?

Why Is Everyone Talking About List Of Hindu Guru's And...