An Inner Line Permit is required to visit the lake as it lies on the Sino-Indian Line of Actual Control. While Indian nationals can obtain individual permits, others must have group permits (with a minimum of three persons) accompanied by an accredited guide; the tourist office in Leh issues the permits for a small fee. For security reasons, India does not permit boating. China National Highway 219 passes by the eastern end of Pangong Tso. The lake can be accessed by driving 12 km from Rutog or 130 km from Shiquanhe. Tourists can rent a boat on the lake, but landing on islands is not allowed for protecting the breeding ground of the birds. There are several restaurants along the shore 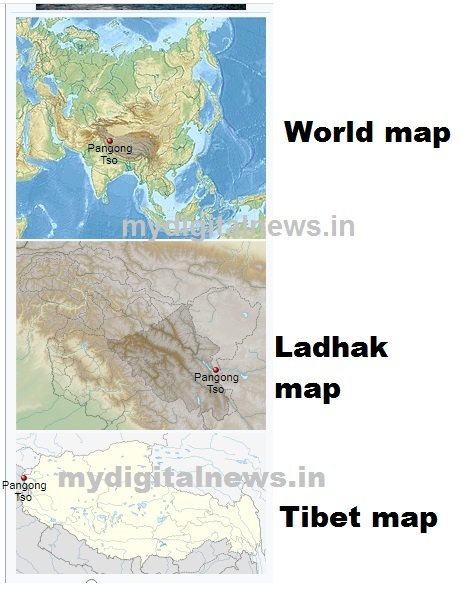 Pangong Tso or Pangong Lake (Tibetan: སྤང་གོང་མཚོ; Chinese: 班公错, Pinyin: Bān gōng cuò, Hindi: पैंगोंग झील) is an endorheic lake in the Himalayas situated at an elevation of 4,225 m (13,862 ft). It is 134 km (83 mi) long and extends from Ladakh, India to the Tibetan Autonomous Region, China. Approximately 60% of the length of the lake lies within the Tibetan Autonomous Region. The lake is 5 km (3.1 mi) wide at its broadest point. All together it covers 604 km2. During winter the lake freezes completely, despite being saline water. It is not a part of the Indus River basin area and geographically a separate landlocked river basin.

The lake is in the process of being identified under the Ramsar Convention as a wetland of international importance. This will be the first trans-boundary wetland in South Asia under the convention. 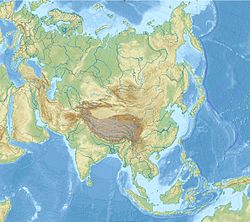 Historically, the lake is viewed as being made up five sub lakes, which are connected through narrow water channels. The name Pangong Tso only applied to the westernmost lake that is mostly in Ladakh. The main lake on the Tibetan side is called Tso Nyak (the "middle lake"). It is followed by two small lakes called Rum Tso. The last lake near Rutog is called Nyak Tso again. The whole lake group was and is still often referred to as Tsomo Nganglha Ringpo (Tibetan: མཚོ་མོ་ངང་ལྷ་རིང་པོ) in Tibetan.

There are different interpretations of the meanings of both Pangong Tso and Tsomo Nganglha Ringpo. The Ladakh government website indicates "Pangong Tso" is Tibetan meaning "high grassland lake", however, travel books from decades back say Pangong means "hollow". Tsomo Nganglha Ringpo is Tibetan that is interpreted to mean various different but similar meanings -- "long, narrow, enchanted lake" by Chinese media sources, "female narrow very long lake" by early European explorers, and "long-necked swan lake" by other modern sources. The lake has also been referred to as Pan-kung Hu.

The eastern part of the lake is fresh, with the content of total dissolved solids at 0.68 g/L, while the western part of the lake is saline, with the salinity at 11.02 g/L. The brackish water of the lake has very low micro-vegetation. Guides report that there are no fish or other aquatic life on the Indian side of the lake, except for some small crustaceans. On the other hand, visitors see numerous ducks and gulls over and on the lake surface. There are some species of scrub and perennial herbs that grow in the marshes around the lake.

The lake acts as an important breeding ground for a variety of birds including a number of migratory birds. During summer, the Bar-headed goose and Brahmini ducks are commonly seen here. The region around the lake supports a number of species of wildlife including the kiang and the marmot. The lake hosts large quantities of fish, especially Schizopygopsis stoliczkai and Racoma labiata.

Formerly, Pangong Tso had an outlet to Shyok River, a tributary of the Indus River, but it was closed off due to natural damming. Two streams feed the lake from the Indian side, forming marshes and wetlands at the edges. Strand lines above current lake level reveal a 5 m (16 ft) thick layer of mud and laminated sand, suggesting the lake has shrunken recently in geological scale. On the Indian side, no fish have been observed, however in the stream coming from South-eastern side (Cheshul nalla), three fish species (Schizopygopsis stoliczkae, Tibetan stone loach and Triplophysa gracilis) have been reported (Bhat et al., 2011). The low biodiversity has been reported as being due to high salinity and harsh environmental conditions (Bhat et al., 2011).

Bird Islet is the most famous island in Pangong Tso

Pangong Tso is in disputed territory. The Line of Actual Control passes through the lake. A section of the lake approximately 20 km east from the Line of Actual Control is controlled by China but claimed by India. The eastern end of the lake is in Tibet. After the mid-19th century, Pangong Tso was at the southern end of Johnson Line, an early attempt at demarcation between India and China in the Aksai Chin region.

The Khurnak Fort lies on the northern bank of the lake, halfway of Pangong Tso. The Chinese has controlled the Khurnak Fort area since 1952. To the south is the smaller Spanggur Tso lake.

Pangong Tso is still a delicate border point along the Line of Actual Control. Incursions from the Chinese side are common.

In August 2017, Indian and Chinese forces near Pangong Tso threw rocks at each other.

On May 5-6, 2020, there was a face-off between about 250 Indian and Chinese troops near Pangong Tso lake. Four Indian and seven Chinese soldiers were injured.