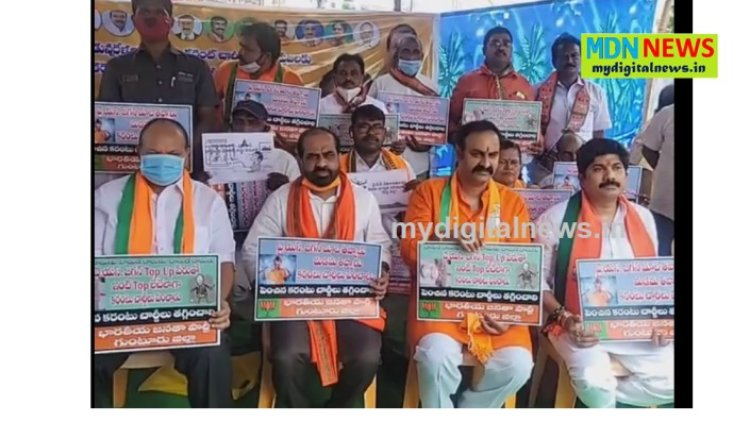 "When injustice becomes law, resistance becomes duty." Thomas Jefferson's Protested against the despotic AP govt led by Jagan for completely ignoring the basic necessities of people in AP like Hiking electricity charges, potholes on roads and hooliganism at its peak. Said by Sathya Kumar Y.

The Theme of Stage Dharna is "Increased Electricity Bill is Burden on Consumers" BPL and MInority and Poor Families are Suffering Due to The Govt Decision to Collect TREUp Charges against the Already highest Regular Charges of Electricity, and Increased Price of Commodities like Veggies, Edible Oil's,  household Items, Special Tax on Garbage ( Household Garbage Tax)

" Centre Providing The electricity by Purchasing at a price of 2.50 RS approx, I.e. less than Three rupees, and Giving it to the Public, But Here in Andhra Pradesh YSRCP govt is Buying at highest-ever like 6+ Rs per unit of Electricity, this is insane and Corrupted " said by Yadlapati Swaroopa Rani.

Nothing is Cheaper for Bussiness and Earning money for the YSRCP Govt, today They Taxed Garbage and Taxing highest on Electricity, and Taxing Highest on Fuels like petrol, Diesel and GAS, and Taxing Drinking Water, and No wonder in the Near future The YSRCP Got Under JAGAN may also tax hair. said Sanakkayala Aruna.

Likewise, The Leaders of AP BJP Countered and Protest the Govt Decisions For collecting the Highest Taxes and Making it a Huge Burden For the Public of the Weaker sections as well as BPL, and Minority others.

It is Insane that YS Jagan Led YSRCP Govt is falsifying the Central ACT's and Orders like SC ST acts, and SUB PLAN for SC ST, and other welfare Schemes for SC ST's, said by Ravel Kishore Babu,

At what Extent The Corporate Tax is Changed under NAMO Govt, and What is it Now...