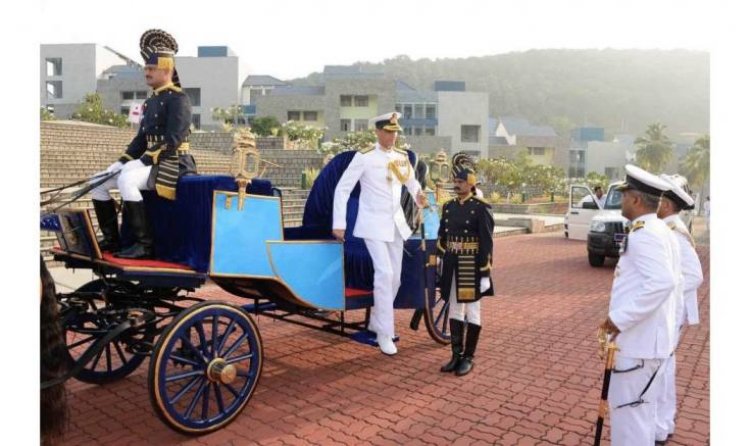 A total of 2142 trainees of Indian Navy and Coast Guard of batch 01/2021 graduated from INS Chilka under Southern Naval Command in a ceremonial Passing Out Parade held on 09 Jul 2021. The parade was reviewed by Vice Admiral MA Hampiholi AVSM, NM, Commandant, Indian Naval Academy.

The passing out parade marked the successful culmination of 21 weeks of their basic training. The Chief Guest also awarded medals and trophies to meritorious trainees on the occasion.

During his address, the Admiral urged the passing out trainees to hone their skills further and develop a strong foundation of knowledge, willingness to learn and commitment to excel in their respective careers that lay ahead. He also urged them to uphold the Navy's core values 'Duty, Honour and Courage'

Earlier, VAdmMA Hampiholi witnessed the Valedictory function on 08 Jul 2021, during which a cultural programme was put up that showcased the talents of the trainees.

The Admiral gave the Overall Championship Trophy to Shivaji Division and Runners Up trophy to Eklavya Division on the occasion.

During the function, the summer edition of Ankur, the bilingual trainee’s magazine of INS Chilka was also released by the Commandant, INA in the presence of Commodore NP Pradeep, Commanding Officer, INS Chilka.

Culture and traditions can be protected only if we preserve...

How, Why,what are the benefits of "Centre merges Dept of...