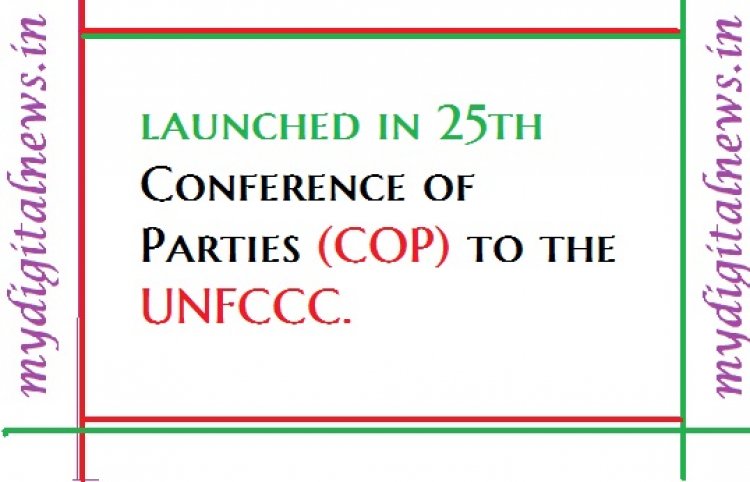 It was launched in 25th Conference of Parties (COP) to the UNFCCC. The platform is an alliance between all stakeholders of civil society and the research community to include the Ocean in solutions relating to climate change. It seeks to promote the necessity of addressing ocean and climate issues synergistically in climate commitments and strategies. It will engage many actors in ocean-climate action, including the public and private sectors, civil society and academia. Chile, as its capacity as a president of COP25, has named COP 25 the ‘Blue COP’ because for the first time the study, protection and sustainable management of oceans were centred in a major climate action conference.

The COP will also feature several additional discussions on the importance of protecting the ocean. The Nairobi work programme on impacts, vulnerability and adaptation to climate change (NWP) has facilitated experts to identify gaps and action on climate change and ocean linkages. ‘Because the Ocean’ Declaration was signed in 2015 UNFCCC COP held in Paris that focuses on objectives to advance action on climate change, oceans and sustainable development. Chile during its Presidency over the 25th session of the Conference of the Parties ( COP 25 , 2019 ) to the UNFCCC, launched the Platform for Science-Based Ocean Solutions (PSBOS) .  The Platform aims to promote the necessity of addressing ocean and climate issues synergistically and to encourage the incorporation of the ocean in-country climate commitments and strategies.  The platform builds on the momentum of an IPCC Special Report on Oceans and Cryosphere in a Changing Climate ( SROCC ) released in 2019.

The global ocean has absorbed more than 90% of the excess heat in the climate system. It has also absorbed 20-30% of total human-caused carbon dioxide emissions since the 1980s, causing increasing surface acidification. Since 1993, the rate of ocean warming has dramatically increased. It has resulted in marine heatwaves doubling in frequency since 1982 and increasing in intensity. It is very likely that between 84–90 % of marine heatwaves that occurred between 2006 and 2015 are attributable to the anthropogenic temperature increase. Intergovernmental Panel on Climate Change (IPCC)

The IPCC is an intergovernmental body of the United Nations.It was founded in 1988. It is headquartered in Geneva, Switzerland. It provides policymakers with regular scientific assessments on climate change, its implications and potential future risks. It also puts forward adaptation and mitigation options. The IPCC does not carry out original research, nor does it monitor climate or related phenomena itself. It assesses published literature including peer-reviewed and non-peer-reviewed sources.The IPCC publishes main Assessment Reports every five or six years. It also publishes a series of special reports to provide an assessment on a specific issue.