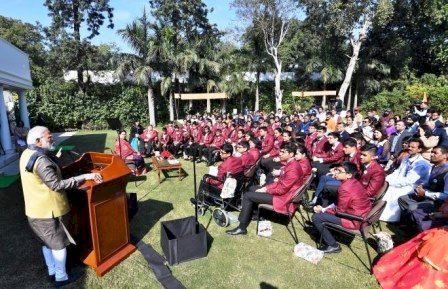 The Pradhan Mantri Rashtriya Bal Puraskar, formerly known as the National Child Award for Exceptional Achievement, is India's Highest Civilian Honour bestowed upon exceptional achievers under the age of 18. The award was instituted by the Ministry of Women and Child Development, Government of India in 1996 to recognize children with exceptional abilities and outstanding status in various fields such as academics, arts, culture, design, innovation, research, social service, and sports.

The award is conferred by the President of India in the week preceding the Republic Day[3] in the Durbar Hall of Rashtrapati Bhavan in New Delhi, where the nation's other prestigious civilian honours like the Bharat Ratna, Padma Vibhushan, Padma Bhushan and Padma Shri are also presented. Previously, the awards were conferred on Children's Day. The Prime Minister also meets with the awardees at his residence, 7, Lok Kalyan Marg. The awardees also participate in the Republic Day Parade.

The Ministry of Women and Child Development has invited nominations for the Pradhan Mantri Rashtriya Bal Puraskar 2021 from children, individuals and institutions.

The Awards are given by the President of India in the week preceding Republic Day (26th January) every year.
Key Points
The PradhanMantriRashtriyaBalPuraskar is given under two categories:
Bal Shakti Puraskar and BalKalyanPuraskar.
Bal Shakti Puraskar:

Procedure for sending the nominations

Open nominations from public will be received only through a website. (i.e:www.nca-wcd.nic.in). Applications received other than online mode will not be entertained.

The web portal to accept nominations round the year while limiting consideration up to 31st August of the respective year,for awards to be given in the month of January, next year. Applications received after the due date will be considered for the awards in the next year.

Any citizen can recommend a child having exceptional achievement through the online portal.

Applications received by the due date will be sent to the State/UT and District Collector/District Magistrate, other government/appropriate agencies/organizations for verification of the content and achievements by 15th October.

Thereafter, the applications will be shortlisted based on the eligibility criteria.

Date of receipt of a recommendation

Particulars of the recommended Child/Individual/Institution for the award should be furnished on the web portal by 31st August of the respective year.

Selection committee for This

A National Selection Committee, headed by Minister, MWCD or MoS, MWCD will finalize the names of the awardees for the Pradhan Mantri Rashtriya Bal Puraskar.