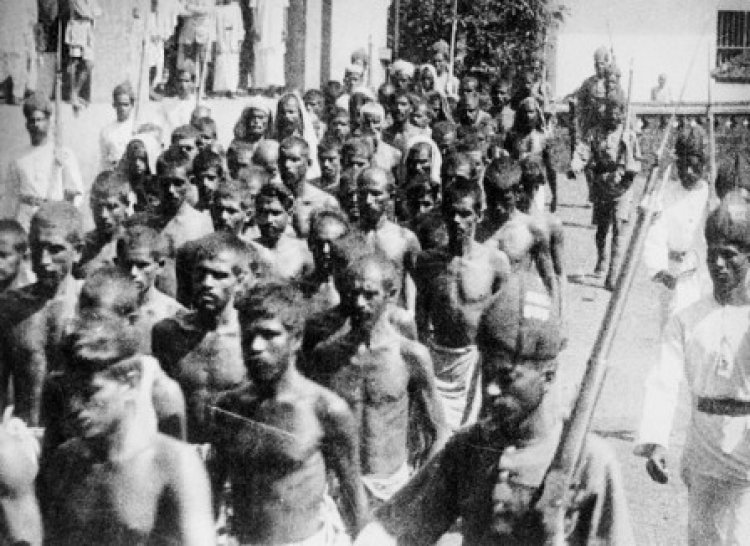 Captured Mappila prisoners taken after a battle with the colonial army

On 20 August 1921, the police attempted to arrest Vadakkevittil Muhammed, the secretary of the Khilafat Committee of Ernad at Pookkottur, alleging that he had stolen the pistol of a Hindu Thirumulpad from a Kovilakam (manor) in Nilambur.

A crowd of 2,000 Mappilas from the neighbourhood foiled the attempt, but on the following day, a squad of police arrested a number of Khilafat volunteers and seized records at the Mambaram Mosque in Tirurangadi, leading to rumours that the building had been desecrated.

A large crowd of Mappilas converged on Tirurangadi and besieged the local police station. The police opened fire on the crowd, triggering a furious reaction which soon engulfed the Eranad and Valluvanad Taluks along with neighbouring areas and continued for over two months.

Following the mosque incident, the rebels attacked and seized police stations, government treasuries, and entered the courts and registry offices where they destroyed records. Some even climbed into the judges' seats and proclaimed the advent of swaraj (self-rule).

By 28 August 1921, colonial rule had virtually come to an end in Malappuram, Tirurangadi, Manjeri, and Perinthalmanna, which then fell into the hands of the rebels who established complete domination over the Eranad and Valluvanad Taluks. On 24 August 1921, Variankunnath Kunjahammad Haji took over command of the rebellion from Ali Musliyar.

Public proclamations were issued by Variyankunnath and Seethi that those Mappilas who resorted to looting would receive exemplary punishments.

During the initial stages of the rebellion, the colonial military and police were forced to withdraw from these areas but by the end of August, several contingents of colonial troops and Gurkha arrived. Clashes with the rebels followed, one of the most notable encounters taking place at Pookkottur (often referred by Mappilas as Battle of Pookkottur), in which colonial troops sustained heavy casualties and had to retreat to safety.

During the early phase of the rebellion, the targets were primarily the Jenmi and the colonial government. Crimes committed by some of the rebels were accepted by leaders.

After the proclamation of Martial law and the arrival of government troops, when some members of the Hindu community were enlisted by the army to provide information on the rebels. Once they had eliminated the minimal presence of the government, the Mappilas turned their full attention to attacking Hindus while Ernad and Valluvanad were declared "Khilafat kingdoms".

During the rebellion, a Mappila gang under the leadership of Odayappurath Chekkutty from Kalpakanchery protected the Kizhake Kovilakam (a seat of the ruling family of the Zamorin of Calicut) and the Arya Vaidya Sala at Kottakkal.

Vaidyaratnam P. S. Warrier, who is also the founder of renowned Arya Vaidya Sala and Kottakkal Natya Sangham at Kottakkal, provided the entire shelter and protection for the orphaned Mappila families when the British army arrested Mappila household men.

By the end of 1921, the situation was brought under control. The colonial government raised a special quasi-military (or Armed Police) battalion, the Malabar Special Police, initially consisting of non-Muslims and trained by the colonial army. The Special Police then engaged the rioters and eventually put an end to the riot.

An Eassy on Vijayanagara Empire in 30 Lines