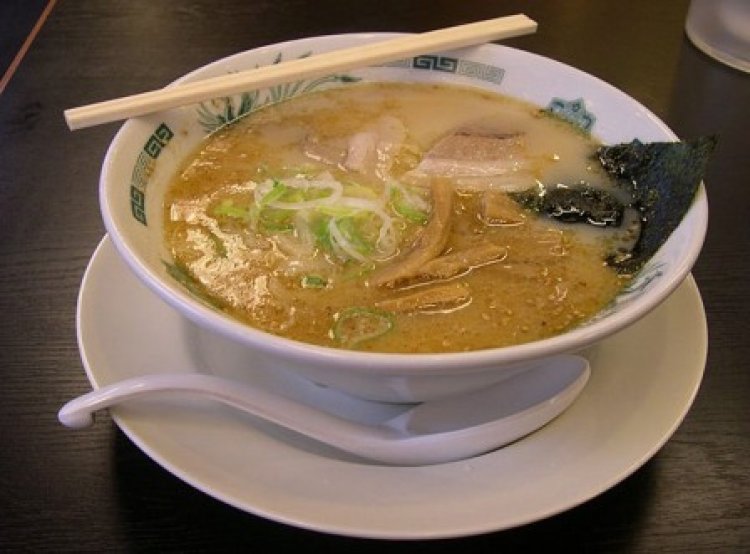 There are many related, Chinese-influenced noodle dishes in Japan. The following are often served alongside ramen in ramen establishments. They do not include noodle dishes considered traditionally Japanese, such as soba or udon, which are almost never served in the same establishments as ramen.

Nagasaki champion, The noodles are thicker than ramen but thinner than udon. Champion is topped with a variety of ingredients, mostly seafood, stir-fried and dressed in a starchy sauce.

The stir-fried ingredients are poured directly over the cooked noodles, with the sauce acting as a soup.

Tan-men is a mild, usually salt tasted soup, served with a mix of sautéed vegetables and seafood/pork. Not to be confused with the tantan-men (see after).

Essentially ramen and toppings served without the soup, but with a small quantity of oily soy-based sauce instead.

Tsukemen ("dipping noodles"), The noodles and soup are served in separate bowls.

The diner dips the noodles in the soup before eating. Can be served hot or chilled. Tantan-men (担担麺). The Japanese version of dan dan noodles, itself a Szechuan speciality.

Ramen in a reddish, spicy chilli and sesame soup, usually containing minced pork, garnished with chopped scallion and chilli and occasionally topped with the likes of spinach or Bok Choi (chingensai).

The topping ingredients are sautéed and a thickener is added before the mix is poured on the soup and the noodles. Hiyashi-chūka (冷やし中華, "chilled Chinese").

Also known as Reimen, esp. in western Japan. A summer dish of chilled ramen on a plate with various toppings (typically thin strips of omelette, ham, cucumber and tomato) and served with a vinegary soy dressing and karashi (Japanese mustard).

It was first produced at the Ryutei, a Chinese restaurant in Sendai.

DigitalOcean $5/month: How many visitors per day for My website?