The Poona Pact was an agreement between Mahatma Gandhi and B. R. Ambedkar on behalf of depressed classes and upper-caste Hindu leaders on the reservation of electoral seats for the depressed classes in the legislature of British India in 1932. It was made on 24 September 1932 at Yerwada Central Jail in Poona, India. It was signed by Ambedkar on behalf of the depressed classes and by Madan Mohan Malviya on behalf of Hindus and Gandhi as a means to end the fast that Gandhi was undertaking in jail as a protest against the decision made by British prime minister Ramsay MacDonald to give separate electorates to depressed classes for the election of members of provincial legislative assemblies in British India. They finally agreed upon 148 electoral seats. Nearly twice as many seats were reserved for Depressed Classes under the Poona Pact than what had been offered by MacDonald's Separate 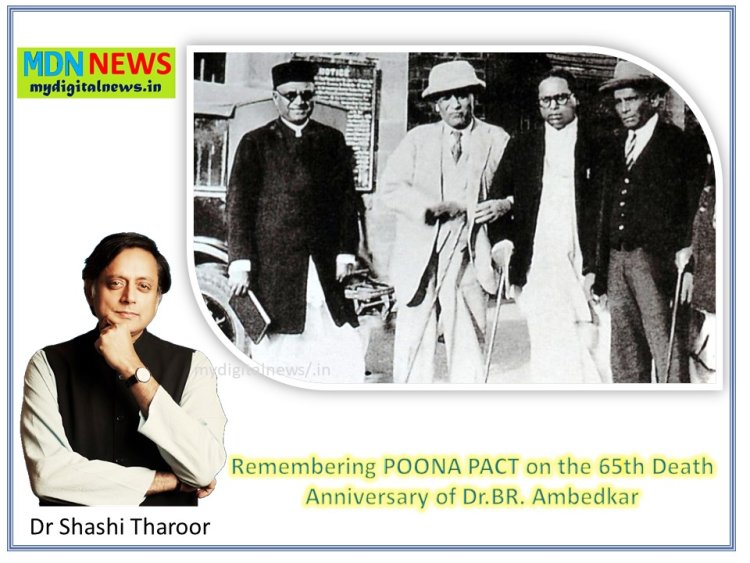 Gandhi protested by fasting while imprisoned in the Yerwada Central Jail of Poona. Following the fast, congressional politicians and activists such as Madan Mohan Malaviya and Palwankar Baloo organised joint meetings with Ambedkar and his supporters at Yerwada.

The agreement gave reserved seats for the depressed classes in the Provisional legislatures within the general electorate.

Due to the pact, the depressed class received 148 seats in the legislature instead of the 71, as allocated in the Communal Award proposed earlier by the colonial government under Prime Minister Ramsay MacDonald.

The text used the term "Depressed Classes" to denote Untouchables among Hindus who were later called Scheduled Castes and Scheduled Tribes under the India Act 1935 and the later Indian Constitution of 1950.

In the Poona Pact, a unified electorate was in principle formed, but primary and secondary elections allowed Untouchables in practice to choose their own candidates.

The terms of the Poona Pact were as follows.

1. There shall be electoral seats reserved for the Depressed Classes out of the general electorate. Seats in the provincial Legislatures were as follows:

These figures were based on the total strength of the Provincial Councils announced in Ramsay MacDonald's decision.

2. Election to these seats shall be by joint electorates subject, however, to the following procedure –

All members of the Depressed Classes registered in the general electoral roll of a constituency will form an electoral college which will elect a panel of four candidates belonging to the Depressed Classes for each of such reserved seats by the method of the single vote and four persons getting the highest number of votes in such primary elections shall be the candidates for election by the general electorate.

3. The representation of the Depressed Classes in the Central Legislature shall likewise be on the principle of joint electorates and reserved seats by the method of the primary election in the manner provided for in clause above for their representation in the provincial legislatures.

4. In the Central Legislature, 18% of the seats allotted to the general electorate for British India in the said legislature shall be reserved for the Depressed Classes.

5. The system of primary election to a panel of candidates for election to the Central and Provincial Legislatures as hereinbefore mentioned shall come to an end after the first ten years unless terminated sooner by mutual agreement under the provision of clause 6 below.

6. The system of representation of Depressed Classes by reserved seats in the Provincial and Central Legislatures as provided for in clauses (1) and (4) shall continue until determined otherwise by mutual agreement between the communities concerned in this settlement.

7. The Franchise for the Central and Provincial Legislatures of the Depressed Classes shall be as indicated, in the Lothian Committee Report.

8. There shall be no disabilities attached to anyone on the ground of his being a member of the Depressed Classes in regard to any election to local bodies or appointment to the public services. Every endeavour shall be made to secure a fair representation of the Depressed Classes in these respects, subject to such educational qualifications as may be laid down for appointment to the Public Services.

9. In every province out of the educational grant, an adequate sum shall be earmarked for providing educational facilities to the members of Depressed Classes.

PM receives first copy of the book, ‘The Ramayana of Shri...