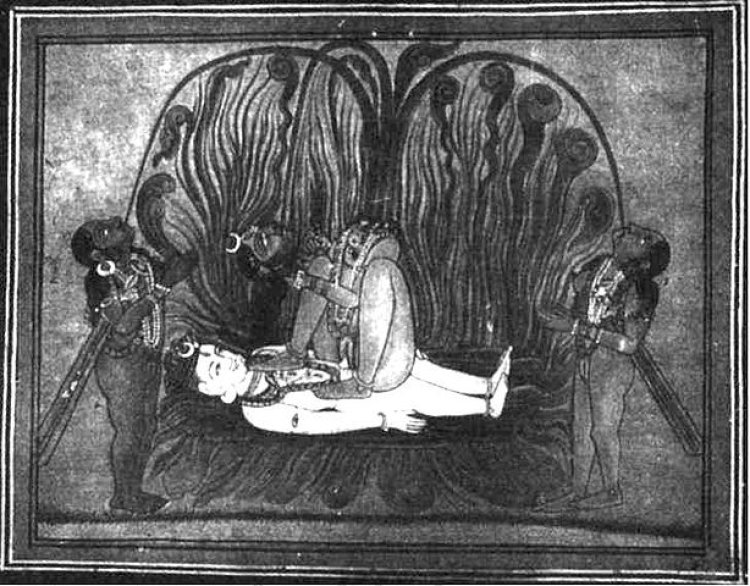 The head is celebrated as a mark of identity as well as source of the seed. Thus, the self-decapitation represents removal of maya (illusion or delusion), physical attachment, false notions, ignorance, and egoism.

The scimitar also signifies the severance of these obstacles to moksha (emancipation), jnana (wisdom), and self-realization. The goddess also denotes discriminating perception. Chhinnamasta allows the devotee to gain a consciousness that transcends the bonds of physical attachment, the body, and the mind by her self-sacrifice.

One interpretation suggests that her three eyes represent the sun, the moon, and fire while another links the third eye to transcendental knowledge. Unlike other Hindu deities who are depicted facing the devotee, Chhinnamasta generally looks at herself, prompting the devotee to look within him- or herself.

The Chhinnamasta icon is also understood as a representation of the awakening of the kundalini – spiritual energy.

The copulating couple represent the awakening in the Muladhara chakra, which corresponds to the last bone in the spinal column. The kundalini flows through the central passage in the body – the Sushumna nadi and hits the topmost chakra, the Sahasrara at the top of the head – with such force that it blows her head off.

The blood spilling from the throat represents the upward-flowing kundalini, breaking all knots (granthis) – those things which make a person sad, ignorant and weak – of the chakras. The severed head is "transcendent consciousness".

The three blood streams represent the flow of nectar when the kundalini unites with Shiva, who resides in the Sahasrara. The serpent in her iconography is also a symbol of the kundalini. Another interpretation associates Daknini, Varnini, and Chhinnamasta with the three main nadis – Ida, Pingala, and Sushumna, respectively – flowing free.

In Yoga, nadis are invisible channels through his life-force is said to flow.

There are three nadis:

Sushumna connects the Muladhara and Sahasrara and is cognate with the spinal cord. Ida courses from the right testicle to the left nostril and is linked to the cooling lunar energy and the right-hand side of the brain.

Pingala courses from the left testicle to the right nostril and is associated with hot solar energy and the left-hand side of the brain.

The goddess is generally said to be visualised in one's navel, the location of the Manipura chakra where the three nadis unite and symbolise consciousness as well as the duality of creation and dissolution.

Another tradition associates her with the Ajna chakra, the location of the "third eye" of wisdom between the eyebrows, the other meeting point of the three nadis. The ability to remain alive despite the beheading is associated with supernatural powers and the awakening of the kundalini.

The Earl of Ronaldshay (1925) compared Chhinnnamasta to India, beheaded by the British, "but nevertheless preserving her vitality unimpaired by drinking her own blood"