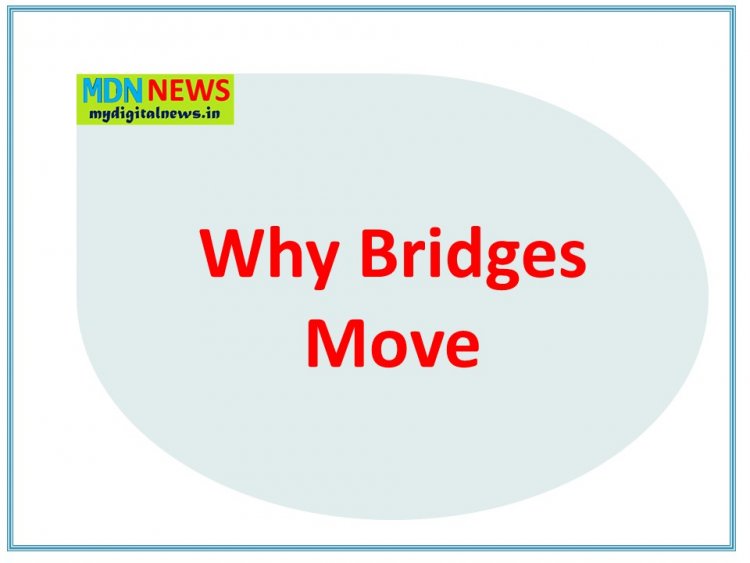 We often think of civil engineers as designers of static structures, or things that don’t move.

That would be nice, but the reality is that everything moves for one reason or another, and one of those reasons happens to be temperature.

More on that later. Whether you realize it or not, you’re probably already familiar with thermal expansion, which is the property of materials to change their volume depending on temperature. If you’ve used a glass thermometer, you’ve even taken advantage of it. The liquid in a thermometer, usually mercury or alcohol, increases in volume as it heats up.

Since we can characterize this expansion, we can put it to use as a measuring device. Maybe you’ve had some experience with a less useful application of thermal expansion. If you’ve ever put glass dishware on a burner or poured cold water on a dish that just came out of the oven, you know it doesn’t go so well.

If it’s allowed to expand and contract evenly, stresses in the material don’t build up. But, if you heat or cool it unevenly, certain parts of the glass will fight against each other as they change size.

Glass isn’t flexible, so instead of bending, it just shatters. Thermal movement is something that has to be considered in nearly every field of engineering because there aren’t many places that don’t see fluctuations in temperature.

And there are really only two options when designing for thermal expansion: The first one is to prevent the movement by constraining it, a feat that is almost always impractical. Thermal movement can generate tremendous amounts of internal stress. Watch how this wire can lift up weight just by heating it up, then cooling it down. So, the other way to accommodate thermal movement is just to allow your design the freedom to move as it so desires.

But sometimes that’s easier said than done, especially for large civil structures. This is the formula for thermal expansion. It may look complicated, but it’s really not. It essentially says that the change in the size of anything is a linear function of temperature proportional to its length. And the slope of this line is the coefficient of thermal expansion. We’ve measured this property for a whole host of materials, and you can look up tables online.

Lucky for civil engineers, the thermal expansion coefficients for steel and concrete are nearly identical, which is why we can combine them into the ubiquitous construction material, reinforced concrete, without worrying too much about fluctuations in temperature pulling it apart.

But, even though they expand and contract at the same rate, they still expand and contract. A perfect example of this is a sidewalk. Let’s look back at our formula and plug in some numbers for a very typical situation. If we enter values for the average length of a city block, the average high and low temperatures in a given year, and the thermal expansion coefficient for concrete, we can see that the total movement of a sidewalk over the course of a year can be upwards of 4 cm or 1.5 inches.

Obviously, you can’t leave a gap in the sidewalk that big at the end of every block, so instead, we leave small gaps spaced every so often to accommodate that movement. Most of the joints you see along a sidewalk are just to control cracking, but if you pay attention, every so often you’ll see an actual break in the concrete-filled with some kind of flexible material.

These are expansion joints that give the walkway the freedom to move from fluctuations in temperature. But what about structures that are longer than a city block? Thermal movement scales with length, so engineers need to take a lot more care with linear infrastructure. Long runs of pipe, especially if they experience fluctuating temperatures, need expansions joints to prevent damage.

The rails for trains can experience “sun kink” where a hot day can actually buckle the steel.

One of the biggest challenges for thermal movement is on bridges.

Unlike sidewalks that can have periodic expansion joints, bridges only have support between spans. You can’t have an unsupported break in the bridge, so that means all of the thermal movement happens at the supports.

The allowance can’t be evenly distributed across the length; it happens all in one spot. For bridges with very long spans, that can be a lot of movement. I’ve got my bridge set up with one side pinned and one side free to move. fire up the sunny day simulator and watch what happens on the dial indicator. The bridge expands along its length as it heats up. This is exactly what happens in real life.

Now I’ll try to pin both sides of the bridge so that the movement is constrained. The bridge still expands as it heats up, but now it has to expand in directions it wasn’t meant to go. It’s a little bit hard to show on camera, but the entire bridge has buckled side to side.

I’m using a flexible rod for this demo, but if a real bridge was constrained like this, the forces generated by thermal expansion would probably lead to the failure of the structural members. Expansion joints on bridges not only have to allow the bridge to move while still being supported, but they also have to bridge the gap in the road deck so that cars can safely drive over it. So, if you look closely, you’ll see lots of creative ways engineers manage thermal expansion. These are some photos collected from the web and sent to me by viewers of different bridge bearings that allow thermal movement.

Take a close look at this steel catwalk over the river. The shorter, cantilevered beams are welded directly to their anchor plates.

They’re free to move because they’re only connected to the rock on one side. But look at the beams that stretch across both sides of the canyon. At first glance, it seems like they’re constrained on both sides and we know that’s bad engineering.

But if you look closely, you can see that they’re bolted to the anchor plate using slotted holes to allow the beams to expand and contract.  hope this gave you a little more insight into the dynamic nature of structures we normally consider static.

Keep your eyes out and you’ll notice allowance for thermal movement everywhere you look.  , and let me know what you think.