Ministry of Earth Science : Subdued Rainfall activity very likely to continue over Northwest, Central and Western parts of peninsular India for the next 5-6 days 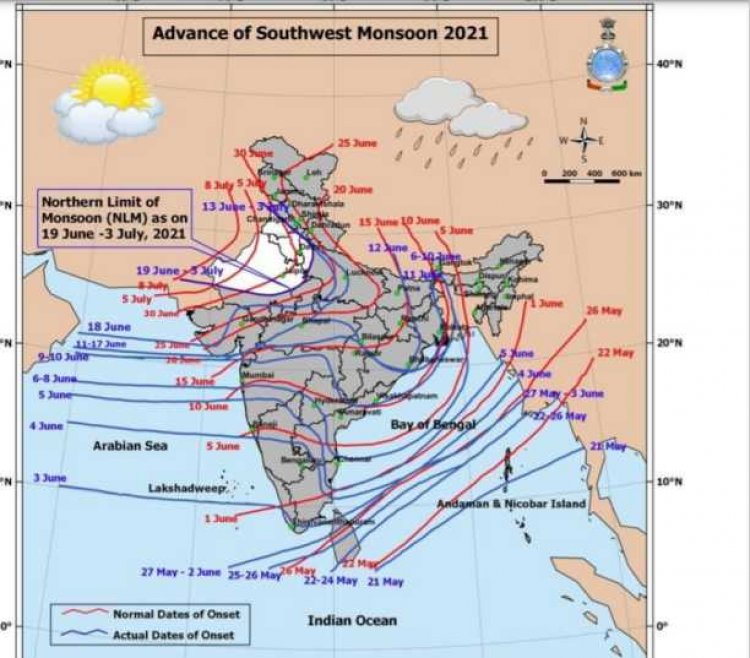 According to the National Weather Forecasting Centre of the India Meteorological Department (IMD) Significant Weather Features  are as follows:

Prevailing meteorological conditions, large scale atmospheric features and the forecast wind pattern by dynamical models suggest that no favourable conditions are likely to develop for further advance of southwest monsoon into remaining parts of Rajasthan, West Uttar Pradesh, Haryana, Chandigarh & Delhi and Punjab during next 5 days.

Hence, subdued rainfall activity is very likely to continue to prevail over Northwest, Central and Western parts of Peninsular India during the next 5-6 days. Isolated/scattered thunderstorm activity accompanied with lightning & rainfall is also likely over these regions during this period.

As predicted, Heat Wave conditions have abated from the plains of Northwest India with the occurrence of an only isolated heatwave over Haryana yesterday. Yesterday, Fairly widespread rainfall has occurred over Punjab, Haryana, Delhi and adjoining parts of West Uttar Pradesh due to a Western Disturbance bringing respite from the prevailing Heat Wave conditions.

Maximum Temperatures over the plains of Northwest India are likely to fall by 3-4°C today and no significant change is likely thereafter. Subsequently, no heatwave conditions are likely over the region during the next 5 days.

Under the influence of strong moist southwesterly winds at lower tropospheric levels from The Bay of Bengal to northeast & adjoining east India and a trough at mean sea level from Northwest .Rajasthan to Nagaland;

Moderate to severe thunderstorms accompanied by frequent cloud to ground lightning very likely over Bihar, Jharkhand, north Chhattisgarh and Gangetic West Bengal during the next 24 hours. This may cause injuries leading to casualties to people and animals staying outdoors.

NOTE: Please email us for updates and corrections, if you wish to publish articles like this you can send them to info@mydigitalnews.in  or mydigitalnews.in@gmail.com or you can Directicle write Articles on our Site by registering https://mydigitalnews.in/register

Culture and traditions can be protected only if we preserve our languages: Vice...