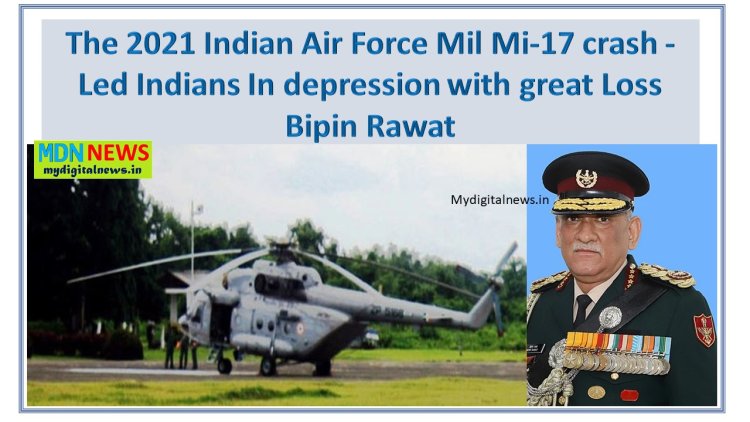 On 8 December 2021, a Mil Mi-17V-5 transport helicopter operated by the Indian Air Force (IAF) crashed between Coimbatore and Wellington in Tamil Nadu, after departing from Sulur Air Force Station. The helicopter was carrying Chief of Defence Staff General Bipin Rawat and 13 others, including his wife Madhulika Rawat and staff. All people on board except one, an air force officer, died in the crash.

The Russian-built Mi-17 medium-lift helicopter was one of the first batches of 80 of its type built for the IAF under the terms of a 2008 contract. Delivered to the IAF in 2013, the helicopter had flown over 26 hours without incident since its most recent servicing.

Wing Commander Prithvi Singh Chauhan, the commanding officer of 109 Helicopter Unit, was the pilot in command, with co-pilot Squadron Leader Kuldeep Singh and two junior warrant officers comprising the rest of the crew.

The passengers had boarded the flight around 11:45 AM local time. At 11:48 AM local time, the helicopter took off with 10 passengers and 4 crew members from Sulur Air Force Station, headed roughly 80 km (50 mi) to the Defence Services Staff College (DSSC) in Wellington, Tamil Nadu. General Rawat, his wife and his staff were travelling to the DSSC, where Rawat was to address the college's faculty and student officers. The flight was scheduled to arrive at Wellington by 12:15 PM.

At 12:08 PM local time, the helicopter lost contact with the Sulur Air force base. It crashed near a residential colony of private tea estate employees on the outskirts of the hamlet of Nanjappachatiram, Bandishola panchayat, in the Katteri-Nanchappanchathram area of Coonoor taluk, Nilgiris district. The crash site was 10 km (6.2 mi) from the flight's intended destination. According to an eyewitness, he "saw the helicopter coming down... it hit one tree and was on fire. There were plumes of smoke when I ran over. In minutes, the fire was higher than my house." Villagers threw water over the fire in an attempt to put it out. Initial reports of the crash emerged around 12:20 PM, with a search-and-rescue operation launched at 12:25 PM. The IAF officially confirmed General Rawat's presence on the flight in a tweet sent at 1:53 PM. Rescue operations continued until 3:25 PM. Fire and Rescue Services personnel who managed to reach the crash site after some difficulty, as the site was 500 meters from a major road, reported the crash victims had been burnt beyond recognition.

The ten passengers on board the flight included Chief of Defence Staff General Bipin Rawat, his wife Madhulika Rawat, liaison officer Group Captain Varun Singh and two members of the general's personal staff, and five NCOs. Following the crash, the IAF released statements at 18:03 confirming the death of 13 of the 14 people on board, including General Rawat and his wife. As of 21:30 local time, all 13 of the bodies had been recovered from the crash site. A Group Captain was the sole survivor of the crash, and was taken to the military hospital in Wellington, Tamil Nadu, for surgery. Having sustained burns over 45% of his body and in critical but stable condition, he was subsequently transferred to the Command Hospital in Bengaluru for further treatment.

The Cabinet Committee on Security (CCS) met on the evening of the disaster to decide on a further course of action. The CCS was headed by Prime Minister Narendra Modi. The Minister of Defence Rajnath Singh made a formal announcement in Parliament on 9 December regarding the incident. The Opposition suspended its protests in Parliament for one day as a tribute to those who lost their lives in the crash. The flight data recorder was recovered on the morning of 9 December.[24] A tri-service commission of inquiry was established by the IAF, headed by Air Marshal Manvendra Singh, the AOC-in-C Training Command.