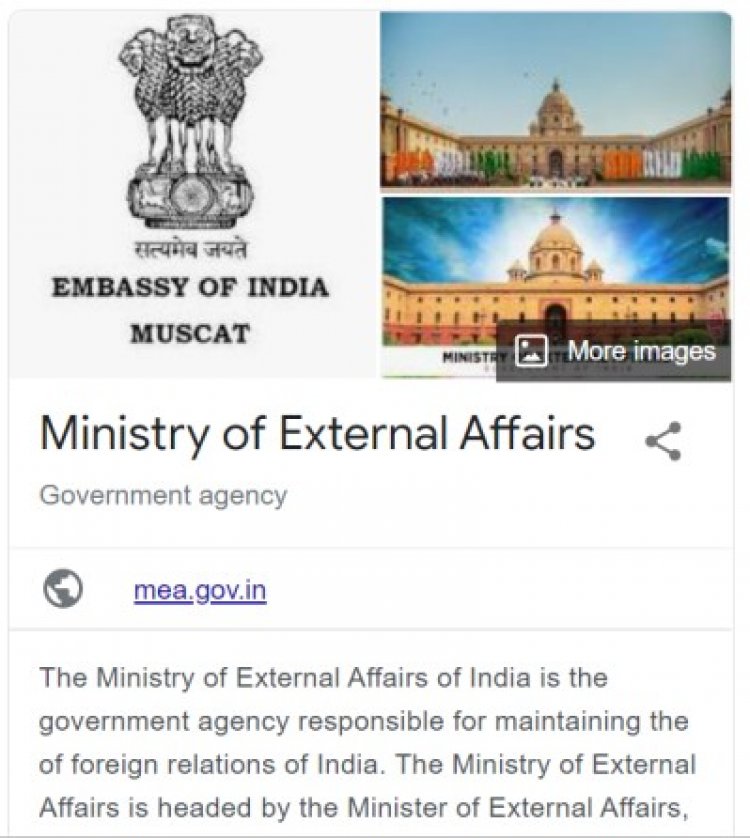 The Foreign Secretary, an Indian Foreign Service officer, is the most senior civil servant who is the head of the Department of Foreign Affairs. The Ministry represents the Government of India through embassies and is also responsible for India's representation at the United Nations and other international organizations. It also advises other Ministries and State Governments on foreign governments and institutions.

The ministry is responsible for the administration of Naga Hills, Tuensang Area, Indian Emigration Act of 1923, the Reciprocity Act of 1943, the Port Haj Committee Act of 1932, the Indian Merchant Shipping Act in so far as it relates to pilgrim ships, the Indian Pilgrim Shipping Rules of 1933, the Protection of Pilgrims Act of 1887 (Bombay) and the Protection of the Mohammedan Pilgrims Act of 1896 (Bengal) are also the special responsibility of the Ministry of External Affairs. The Ministry is the cadre controlling authority of the Indian Foreign Service, the service is wholly under the administration and supervision of the External Affairs Ministry.

Organizational structure: The Ministry of External Affairs is headed by the Minister of External Affairs (or simply, the Foreign Minister, in Hindi Videsh Mantri).The Foreign Secretary is the most senior civil servant who is the head of the Department of Foreign Affairs,[6] and is supported by other secretary level officers.

Development Partnership Administration (DPA) is an agency under the Ministry of External Affairs formed in 2013 to increased its strategic footprint and for the effective execution of projects with professionals from diverse backgrounds.

India has an elaborate project portfolio in its neighbourhood, including

It is headed by Sujata Mehta, one of India’s foremost diplomats and former Indian representative to UN Conference on Disarmament, Geneva. Mehta is Special Secretary in the MEA. According to OECD estimates, 2019 official development assistance from India increased to US$ 1.6 billion.

India Perspectives is the flagship publication of the Ministry of External Affairs. A bi-monthly magazine, it is digitally published in English and Hindi, and 14 other international languages, with a readership spanning 170 countries.

It is crafted to support the Ministry’s diplomatic initiatives and highlight India’s bilateral ties with the rest of the world.

The magazine provides an insight into India’s culture and tradition along with elements of contemporary India. With intelligent, analytical and verified editorial content, the publication is one of the most authentic sources of information regarding India’s ‘soft diplomacy’ initiatives as well as its rich cultural, scientific and political heritage.

By showcasing the country’s various facets through original stories on travel, art, music, cinema and more, the magazine takes India to the world.

Location of MEA: The office of the Ministry is located in the South Block building which also contains the Prime Minister's office and Ministry of Defence. Other offices are located in Jawaharlal Nehru Bhawan, Shastri Bhawan, Patiala House, and ISIL Building.

Articles From COI Related to RIGHT to EQUALITY - INDIA