The trio (Aryan,Arbaz Seth Merchant and Munmun Dhamecha) was arrested following a surprise raid by the NCB at an alleged rave party?

The NCB also said that "incriminating material" was found from the WhatsApp chats of Aryan and the others which show that they were involved in drug trafficking. It is said that these "high-profile persons" can also influence other regular students to consume drugs that need to be stopped. 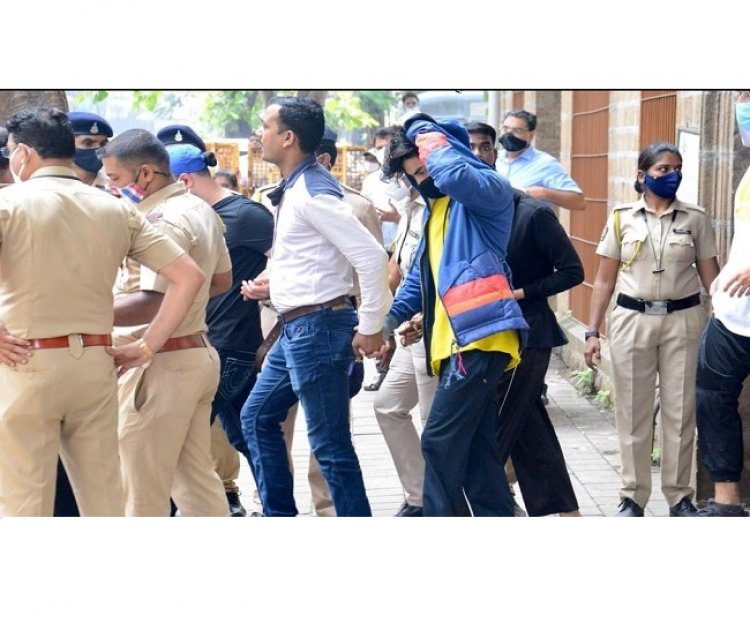 Aryan Khan, the 23-year-old son of Bollywood megastar Shah Rukh Khan, was sent to the custody of Narcotics Control Bureau (NCB) till October 7 on Monday by a local Mumbai court. Aryan was arrested by the anti-drugs agency on Sunday, a day after it carried out a surprise raid at an alleged rave party on Cordelia Cruises' Empress ship near Mumbai.

Besides Aryan, the court also extended the custody of Arbaz Seth Merchant and Munmun Dhamecha till October 7. Extending the trio's custody, the court said that it is important to investigate the charges levelled against them.

"So far as seizure is affected and the assumption from the chats, the alleged contraband is seized, there is nothing to show the case against accused. Hence, they prayed for judicial custody," the court order read, as reported by Bar and Bench.

"All the offences under NDPS are non-bailable. Therefore, questions of bailable or non-bailable does not arise. What is essential to consider is whether the custody is to be given or not," it added.

Earlier in the day, the NCB sought Aryan's custody till October 11 as it claimed that the investigation is in the "preliminary stage". It told the court that "all the accused need to be confronted and the international transactions need to be investigated".

The NCB also said that "incriminating material" was found from the WhatsApp chats of Aryan and the others which show that they were involved in drug trafficking. It is said that these "high-profile persons" can also influence other regular students to consume drugs which need to be stopped.

"Ultimately, the person may not be found with commercial quantity but then custody is required to find out the chain or links...Where is the financing made, who is the source, all this needs to be found out. So we are only asking for a few more days of custody," it said, as reported by Bar and Bench.

However, advocate Satish Maneshinde, who was appearing for Aryan, refuted the charges levelled against the 23-year-old and informed court that he was only a "special invitee" on the cruise ship that was raided by the NCB on Saturday night.

Maneshinde further said the "panchnama" does not indicate that anything has been seized from Aryan apart from his mobile phone. He also saud that nothing has been found against Aryan, adding that he is cooperating with the probe agencies.

"Upon further interrogation, they have downloaded my WhatsApp chats. While I was abroad, they claim that my chats indicate international drug trafficking. The entire period of my stay abroad, I have not been involved in any trafficking, supply or distribution," Bar and Bench quoted Maneshinde as saying.

The anti-drugs agency had on Saturday evening busted a drugs party on board the ship, of the Cordelia Cruises company and arrested Aryan and seven others, including two women.

They had raided the ship based on a tip-off that a party was scheduled on board. The sleuths seized 13 gm of cocaine, 5 gm of MD, 21 gm of charas and 22 pills of Ecstasy and Rs 1.33 lakh, an official earlier said.

During the raid, over 20 officials of the Mumbai NCB had boarded the ship posing as customers. There were 1,800 people on the ship, but after checking all were asked to go except the eight, including Aryan Khan, the official said.

Starship Orbital Flight Is Most Likely to Be Delayed | Staship20 Static Fire | Blue...