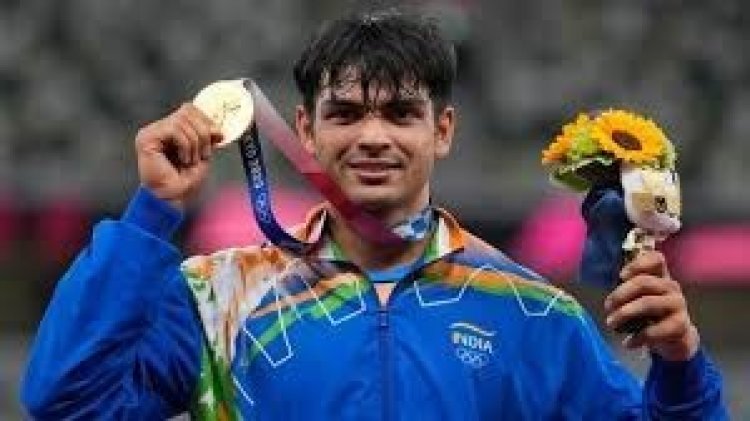 In the 2016 IAAF World U20 Championships, Chopra achieved a world under-20 record of 86.48 m. Neeraj Chopra was also the flag-bearer at the opening ceremony for India at the 2018 Asian Games, which marked Neeraj Chopra's first Asian Games appearance.

Neeraj Chopra is one of only two Indians to win an individual gold medal at the Olympics (alongside Abhinav Bindra), as well as the youngest-ever Indian gold medalist in an individual event and the only one to have won gold in his Olympic debut.

Chopra is the son of Sri. Satish Kumar, a farmer, and Sri . Saroj Devi, a housewife and his family is based in the Khandra village, Panipat district, Haryana. He has two sisters. He was born in the Rod Maratha clan. He graduated from Dayanand Anglo-Vedic College in Chandigarh and is currently pursuing a Bachelor of Arts from Lovely Professional University in Jalandhar, Punjab.

Ancestry According to some unconfirmed reports, Neeraj Chopra's ancient ancestral root may be from the Rod Maratha clan, whose warriors came to Haryana from Maharashtra to fight the third battle of Panipat in 1761; and many Maratha soldiers and commanders began to live in and around the villages of Panipat, Haryana.

On 14 January 1761 Maratha Empire fought the biggest war of their history against Ahamad Shah Abdali of Durrani Empire of Afganistan. Maratha lost in the Panipat war and suffered 40 to 50 thousand casualties.

After training under Neeraj Chopra's first coach Sri. Jaiveer Chaudary for a year, Neeraj Chopra was admitted to the Tau Devi Lal Sports Complex in Panchkula, four hours from Neeraj Chopra's home, which was then one of only two facilities in the state of Haryana with a synthetic runway.

Neeraj Chopra soon increased his range and won the 2012 junior nationals in Lucknow by achieving a new national record throw of 68.40 metres. The next year, Neeraj Chopra entered his first international competition, the World Youth Championships in Ukraine.

Neeraj Chopra won his first international medal in 2014, a silver at the Youth Olympics Qualification in Bangkok.

Neeraj Chopra received a callback for the national-level training camp in 2015, leaving Panchkula in early 2016.

Neeraj Chopra won a gold medal at the 2016 South Asian Games with a throw of 84.23 m, where Neeraj Chopra equalled the Indian national record.

Neeraj Chopra won a gold medal in the 2016 IAAF World U20 Championships in Bydgoszcz, Poland and set a world junior record. Despite these performances, Neeraj Chopra failed to qualify for the 2016 Summer Olympics as the cut-off date was 11 July.

General Bipin Rawat, Chief of Army Staff, congratulating Chopra, gold medallist in javelin throw, and Gaurav Solanki, gold medallist in boxing, for their performance in 2018 Commonwealth Games. In 2016, after Neeraj Chopra set the world under-20 record of 86.48 m at the IAAF World U20 Championships, Neeraj Chopra was appointed a Junior Commissioned Officer in the Indian Army with the rank of Naib Subedar.

Neeraj Chopra won another gold medal in the 2017 Asian Athletics Championships with a throw of 85.23 metres.

In the men's javelin throw at the 2018 Commonwealth Games, Neeraj Chopra registered a season-best effort of 86.47 metres, becoming one of the few Indian athletes to win a gold medal on their Commonwealth Games debut, and also becoming the first Indian to win the javelin throw at the Games. In May 2018, Neeraj Chopra again broke the national record at the Doha Diamond League with a throw of 87.43 metres.

On 27 August 2018, Neeraj threw a distance of 88.06 m to win gold in the Men's javelin throw at the 2018 Asian Games and set a new Indian national record, bettering his own previous record.

It was also India's first gold medal in the javelin throw at the Asian Games. Neeraj Chopra was the only track and field athlete that year to be recommended by the AFI for the country's highest sports award, the Khel Ratna but was awarded the Arjuna Award in September 2018. 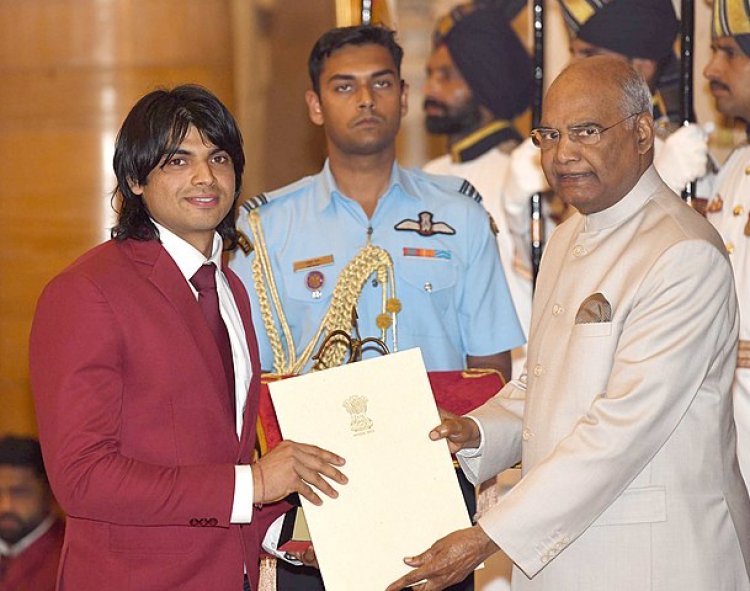 Having suffered an elbow injury, Chopra underwent surgery in Mumbai on 2 May 2019, the day after the qualifying competitions for the 2020 Tokyo Olympics had begun.

After 16 months of recuperation, including practising meditation and rehabilitative training at Patiala and the IIS Vijayanagar, Neeraj Chopra travelled to South Africa in November 2019 for training under German biomechanics expert Klaus Bartoneitz.

Previously, Neeraj Chopra had been coached by Gary Calvert, Werner Daniels and Uwe Hohn. In South Africa, Neeraj Chopra returned to international competition with a winning throw of 87.86 metres in the ACNW League Meeting in Potchefstroom, which qualified him for Tokyo.

On 5 March 2021, Chopra again broke Neeraj Chopra's own national record with a new throw of 88.07m, establishing him in a world-leading position.

Neeraj Chopra opened his international season of 2021 with a throw of 83.18 metres that earned him a gold medal at an event in Lisbon, Portugal.

Neeraj Chopra Chopra made his debut appearance at the Olympics representing India at the 2020 Summer Olympics. On 4 August 2021, Neeraj Chopra qualified for the final in the men's javelin throw with a throw of 86.65 metres.

Neeraj Chopra also became only the second Indian to win an individual Olympic gold medal after Abhinav Bindra won the gold medal in the men's 10 m air rifle in the 2008 Summer Olympics on 11 August 2008. Neeraj Chopra dedicated his win to sprinter Milkha Singh the flying Sikh or the Flying Milka.