Why Dr RS Praveen kumarIPS(R) Joined BSP ? what are the Aims and Objectives of BSP party ?

Self-less service, equality among every citizen of India, Upliftment of talented irrespective of caste and creed, ..and many welfare activities are the best mirrors of Dr RS Praveen Kumar IPS (R). ok, But What are the BSP AIMS and VIsion. RSP joined BSP is this sign of Red carpet for the Poor to the Equality stage? 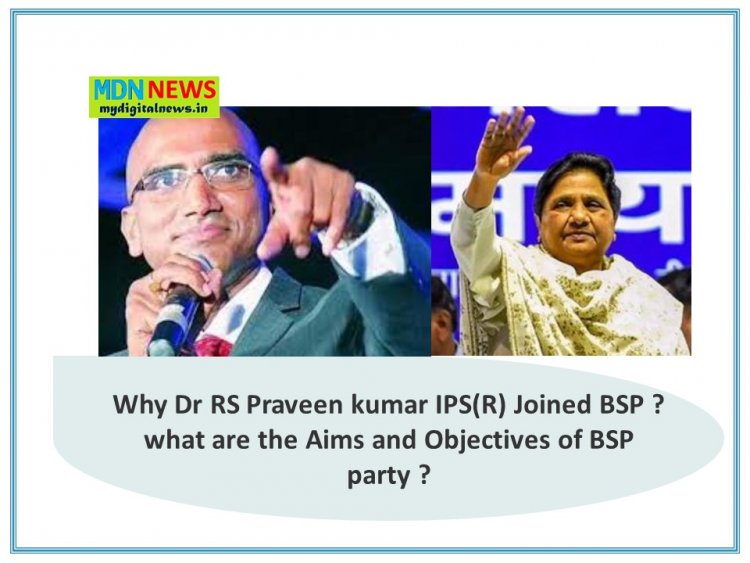 The chief aim and objective of the party shall be to work as a revolutionary social and economic movement of change with a view to realise, in practical terms, the supreme principles of universal justice, liberty, equality and fraternity enunciated in the Constitution of India, to be followed by State in governance, and in particular summed up in the following extract from the Preamble of the Constitution.

We, THE PEOPLE OF INDIA, having solemnly resolved to constitute India into the SOVEREIGN SECULAR DEMOCRATIC REPUBLIC and to secure to all its citizens:

The Party shall regard its ideology as a movement for ending exploitation of the weaker sections and suppression of the deprived through social and economic change in keeping with the above stated chief aim, and its political activity and participation in governance as an instrument of furthering such a movement and bringing in such a change.

This being the chief aim of the Party, the strategy of the Party in public affairs will be governed by the following general principles:

That the full, free, uninhibited and unimpeded development of each individual is a basic human right and State is an instrument for promoting and realising such development;

That the provisions of the Constitution requiring the State at Center and in States to promote with special care and protect the socio-economic interests of the weaker sections of the society denied to them for centuries, have to upheld and given practical shape in public affairs as a matter of prime most priority.

That economic disparities and the wide gaps between the ‘haves’ and the ‘have nots’ must not be allowed to override the political principle of “one man, one vote, one vote, one value” adopted by our republic.

That unless political empowerment is secured for the economically deprived masses they will not be able to free themselves from the shackles of economic and social dependence and exploitation.

In particular and without prejudice to the generality of the aims stated above the Party will work specially towards the following objectives:

The Scheduled Castes, the Scheduled Tribes, the other Backward Castes, and the minorities are the most oppressed and exploited people in India. Keeping in mind their large numbers, such a set of people in India is known as the Bahujan Samaj. The Party shall organise these masses.

The party shall work for these downtrodden masses to

to remove their backwardness;

to fight against their oppression and exploitation;

to improve their status in society and public life;

to improve their living conditions in day to day life;

The social structure of India is based on inequalities created by a caste system and the movement of the Party shall be geared towards changing the social system and rebuild it on the basis of equality and human values.

All those who join the party with the commitment to co-operate in this movement of social change shall be ingratiated into the fold of the Party.

Towards the furtherance of the above-noted aims and objectives, the organisational units of Party as designated in this constitution shall be empowered to:-

purchase, take on lease or otherwise acquire, and maintain, moveable or immovable property for the Party and invest and deal with monies of Party in such a manner as may from time to time be determined;

raise money with or without security for carrying out any of the aims and objectives of the Party;

to do all other lawful things and acts as are incidental or conducive to the attainment of any of the aforesaid aims and objectives,

Provided that none of these activities will be undertaken without the express approval of the National President.