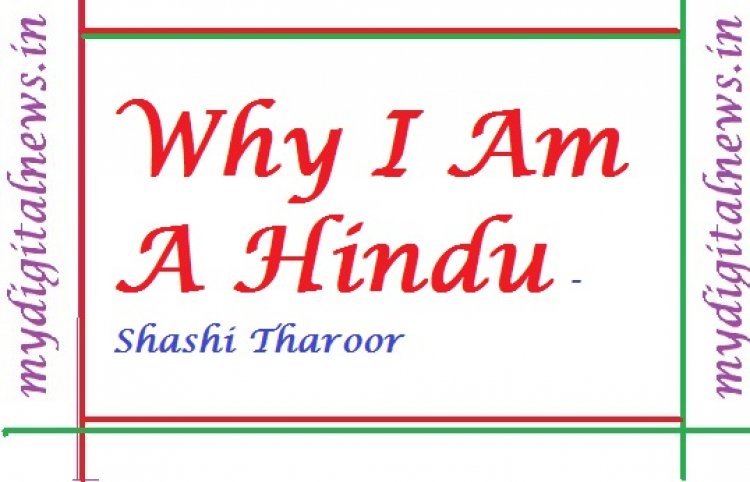 why am I Hindu, the obvious answer to this question is, of course, that it's because I was born one?  most people had little choice about the faith they grew up with, it was selected for them at Birth by the accident of geography and their parents' cultural moorings, but what does being a Hindu mean, many of us began having to interrogate ourselves.

in the late 1980s, when the world media first began to speak in right of Hindu fundamentalism this was odd because we knew of Hinduism as a religion without fundamentals, no founder or prophets, no organized church, no compulsory beliefs, or rites of worship, no uniform conception of the good life, no single sacred book.

my Hinduism was a lived faith it was a Hinduism of experience and our bringing a Hinduism of observation and conversation, not one anchored in the deep religious study though of course, the two are not mutually exclusive none of these constitutes an obligatory credo, for a Hindu there are none, we have no compulsory dogmas, this is of course rather unusual a Catholic is a Catholic because he believes Jesus was the son of God who sacrificed himself for men. a Catholic believes in the Immaculate Conception and the virgin birth offers confession genuflection church and is guided by the Pope and a celibate priest children.

a Muslim must believe that there is no god but Allah and that Muhammad is His Prophet. a Jun cherishes is Thor our pentatonic and his Talmud. a Parsi worships at a fire temple. a Sikh honors the teachings of the Guru Granth side above all else. there is no Hindu equivalent to any of these beliefs there are simply no binding requirements to being a Hindu, not even a belief in God, but another reason for my belief in Hinduism is for lack of a better phrase its intellectual fit. I'm more comfortable with the tenets of Hinduism then I would be but those are the other faiths of which I know, I have long thought of myself as liberal not merely in the political sense of the term or even in relation to principles of economics but as an attitude to life to accept people as one finds them, to allow them to be and become what they choose and to encourage them to do whatever they like so long as it does no harm to others is my natural instinct as a Hindu I can claim adherence to a religion without an established church or priestly papacy a religion as rituals and customs.

I'm free to reject a religion that does not oblige me to demonstrate my faith by any visible sign my substitute is subsuming my identity in any collectivities not even by a specific day or time or frequency of worship.  there is no Hindu Pope no Hindu Vatican no Hindu Catholicism, not even a Hindu Sunday,

as a Hindu I follow a fit that offers a veritable smorgasbord of options to the worshipper of divinities to adorn and to pray to of rituals to observe or not of customs and practices to honour or not or fast to keep or not its capacity to express wonder at creation and simultaneously scepticism about their missions of the Creator are unique to Hinduism both are captured beautifully in this verse from the 3500-year-old Rig Veda the NASA Diya sucked all the creation, him who knows whence this creation had its origin, he whether he fashioned it or whether he did not he who surveys it all from the highest heaven he knows or maybe even he does not know. I'd love a faith that raises such a fundamental question about known as a Supreme Being than the creator of the universe himself