Israelis are paying tribute to Indian soldiers (Cavalry regiments - Mysore, Hyderabad, Jodhpur) for their role in liberating Haifa from Ottoman rule. Indian soldiers were lauded in Israeli textbooks for freeing Haifa from Turks. But in India, people hardly know about this. the Indian Soldiers ROle in the Battle of HAifa 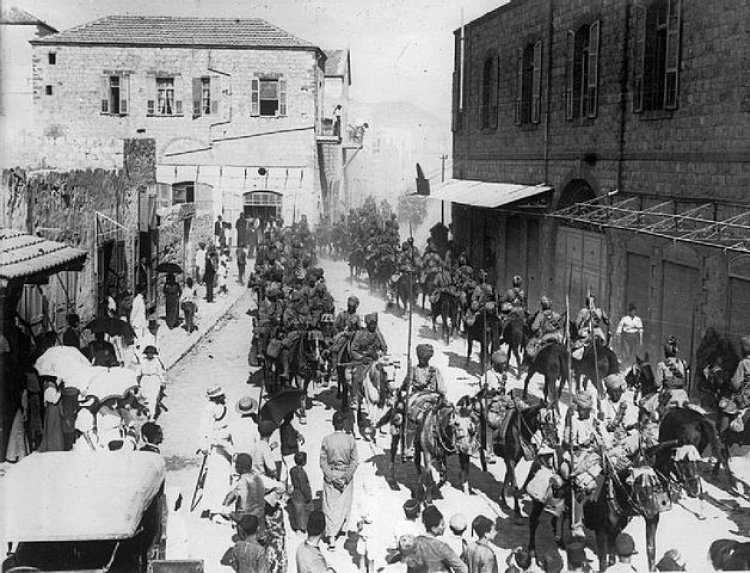 Indian soldiers were lauded in Israeli textbooks for freeing Haifa from Turks. But in India, people hardly know about this. the Indian Soldiers ROle in the Battle of HAifa

The Battle of Haifa was fought on 23 September 1918 towards the end of the Battle of Sharon which together with the Battle of Nablus formed the set piece Battle of Megiddo fought between 19 and 25 September during the last months of the Sinai and Palestine Campaign of the First World War.

During the Battle of Haifa, the Indian 15th (Imperial Service) Cavalry Brigade, 5th Cavalry Division and part of the Desert Mounted Corps attacked rearguard forces of the Ottoman Empire that resulted in the capture of the towns of Haifa and Acre. 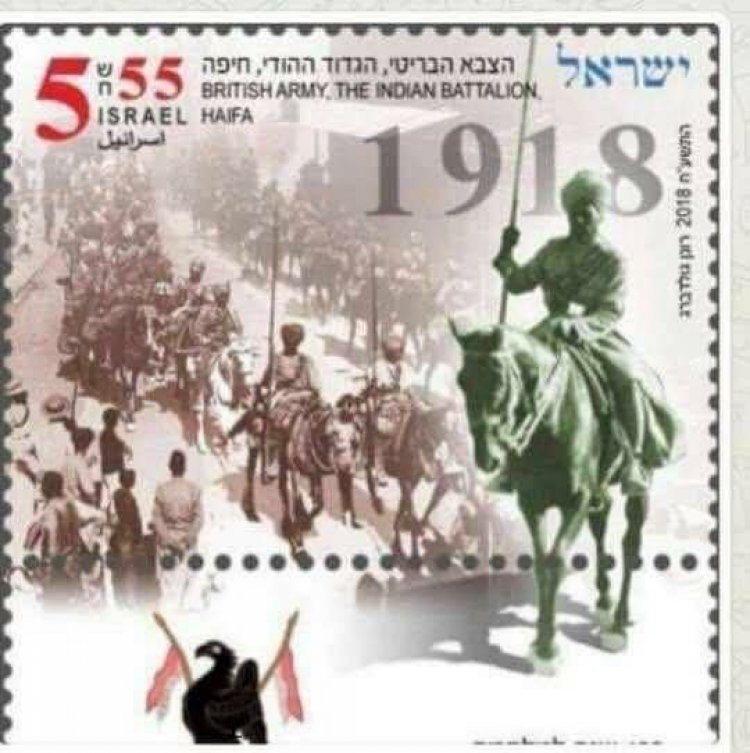 This attack took place at the northwestern edge of the Esdraelon Plain (also known as the Jezreel Valley and the plain of Armageddon) 40–50 miles (64–80 km) behind the front line in the Judean Hills after the Desert Mounted Corps had occupied the plain, during the cavalry phase of the Battle of Sharon.

The Battle of Megiddo had begun with an attack by British Empire infantry along an almost continuous line from the Mediterranean Sea across the Plain of Sharon into the foothills of the Judean Hills.

They attacked the Ottoman front line and captured the headquarters of the Ottoman Eighth Army at Tulkarm, the trenches at Tabsor and pivoted at Arara. The Eighth Army was outflanked on the coast and British Empire cavalry moved north through the gap created.

The Desert Mounted Corps almost encircled the infantry in the Judean Hills capturing their main lines of supply, communications and retreat. By 25 September, one Ottoman army had been destroyed, and what remained of two others, were in retreat northwards to Damascus.

The 5th Cavalry Division was assigned the task of capturing Haifa and Acre after several earlier attempts were stopped by strong rearguard positions.

This day of 23 September every year is celebrated as Haifa Day.

The 5th Cavalry Division was formed with three brigades, two of them composed of one British yeomanry regiment, and two British Indian Army cavalry regiments; one of which was usually lancers. Part of the Desert Mounted Corps, it was supported by machine guns, artillery, and lightly armoured car units.

Following the successful advance and virtual encirclement of the Ottoman Seventh and Eighth Armies in the Judean Hills with the captures of Afulah and Nazareth, the Yildirim Army Group general headquarters was out of communication with its three armies.

All direct routes northwards were controlled by the Desert Mounted Corps. Thus, the retreating Seventh Army and what remained of the Eighth Army were forced to withdraw along minor roads or tracks, eastwards across the Jordan River, towards the Hedjaz railway.

The capture of Haifa was essential for any further advances by the Egyptian Expeditionary Force since the roads leading to the port were little more than tracks and its capture was urgently required for landing supplies.

"1st Australian Light Armoured Car Patrol on the coast road west of Mount Carmel" Shortly after midnight on 21/22 September, the 18th King George's Own Lancers, part of the 13th Cavalry Brigade, were advancing along the Acre road to the west of the town when they were attacked by an Ottoman battalion from Haifa.

They routed the battalion after a short fight inflicting 30 casualties and capturing more than 200 prisoners.

On 22 September an aerial reconnaissance reported that Haifa had been evacuated by the Ottoman army. This was found to be inaccurate when the Haifa Annexation Expedition was stopped by accurate Ottoman artillery and machine gunfire.

A reconnaissance by armoured cars of the Light Car Patrol encountered a redoubt 200 yards (180 m) from the road to Haifa. This strong rearguard with machine guns was supported by effectively positioned artillery deployed on the lower slopes of Mount Carmel.

The redoubt was fired on by the cars' machine guns and quickly surrendered, while 2 miles (3.2 km) further on they encountered an Austrian battery of light field guns supported by German machine gunners which stopped the reconnaissance force.

They controlled the approach road from the east which ran between the mountain and the Nahr el Muqatta. This strong position could not be outflanked because the Nahr el Mugatta river was edged on both sides by marshes making it virtually impossible to cross.

During Battle of Haifa Falls Map 21 Cavalry advances 19 to 25 September. Detail shows the capture of Haifa and Acre On 23 September 1918 the 15th (Imperial Service) Cavalry Brigade was ordered to capture Haifa. The area between the Nahr al-Muqaṭṭaʿ, also known as the Kishon River, and the slopes of Mount Carmel was well defended by Ottoman gun emplacements and artillery.

The brigade's Jodhpur Lancers were tasked to capture this position, while the Mysore Lancers moved around to attack the town from the east and north.

A squadron of the Mysore Lancers and a squadron of the Sherwood Rangers Yeomanry, supported by B Battery, Honourable Artillery Company, attacked the Austrian battery of light field guns on the slopes of Mount Carmel at 14:00 hours. The squadron of Mysore Lancers had moved into position by climbing up a steep track to capture and silence the guns, while the Jodhpur Lancers launched the main mounted attack on the rearguard of German machine gunners, which blocked the road 2 miles (3.2 km) on from the redoubt captured the day before by the Light Car Patrol.

The Jodhpur Lancers charged the Ottoman position, crossing the Acre railway line, but came under machine gun and artillery fire. The charge was further obstructed by quicksand on the river banks, so they manoeuvred to the left onto the lower slopes of Mount Carmel. The regiment secured the position capturing thirty prisoners, two machine guns, two camel guns and opening up an access route into Haifa.

The Jodhpur Lancers continued their charge into the town, surprising the defenders. Those Mysore Lancers who had been giving fire support to the attacking regiment mounted and followed them into the town. Together the two regiments captured 1,350 German and Ottoman prisoners, including two German officers, 35 Ottoman officers, 17 artillery guns including four 4.2 guns, eight 77mm guns and four camel guns as well as a 6-inch naval gun, and 11 machine guns. Their own casualties amounted to eight dead and 34 wounded. 60 horses were killed and another 83 injured.

We tried to cover the Turks’ retreat, but we expected them to do something if only keep their heads. At last, we decided they were not worth fighting for. — A captured German officer

The aftermath of the Battle of Haifa - Soon afterwards the 13th Cavalry Brigade captured Acre, to the north, together with its garrison of 150 men and two artillery guns. On 26 September, the 300 strong remnants of the Haifa garrison arrived at Beirut and were ordered inland to Riyak, to the north of Damascus.

Allenby reported on 25 September to the War Office regarding the proposed advance to Aleppo and the general situation of the battle:

I have your HW wire and that from Troopers proposing a Cavalry raid to Aleppo. I don't think Aleppo possible; but am sending 3 Divisions of Cavalry, as soon as I can, to Damascus. Chaytor's Division of Anzac Light Horse is about Amman now, and will deal with enemy coming from the South. Prisoners number well over 40,000 and are still coming in. I have Australian mounted troops at the S. end of Lake Tiberias, and they are pushing to Tiberias. If I get Damascus, Beirut falls to us certainly; and I hope to push troops, Northwards, thither, by the coast–road from Haifa, feeding from the sea, stage by stage. — Allenby to Wilson CIGS War Office 25 September 1918

By 29 September, the 7th (Meerut) Division was concentrated at Haifa with the XXI Corps Cavalry Regiment at Acre in preparation for their march to Beirut.[21] The Jodhpur Lancers' commander Major Thakur Dalpat Singh Shekhawat, who was killed in the battle, was posthumously awarded the Military Cross.[22] The Jodhpur and Mysore Lancers are now represented by the 61st Cavalry Regiment in the Indian Army and still commemorate the battle every year on 23 September as Haifa Day.