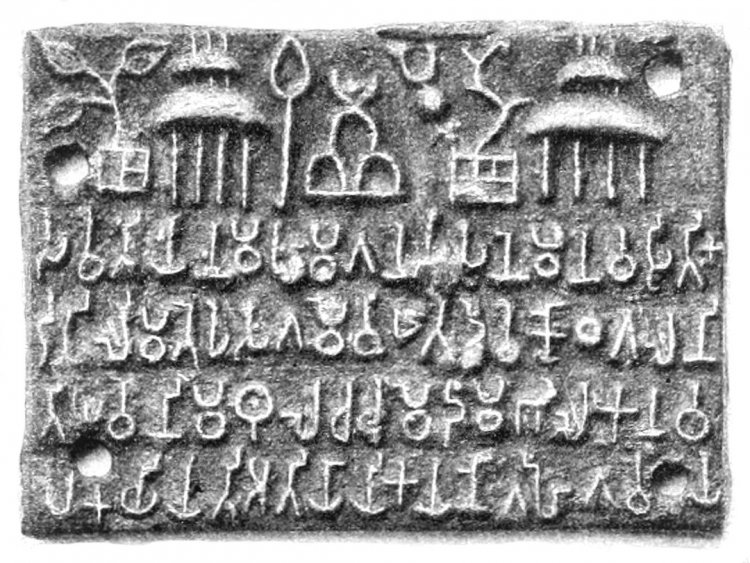 Brahmi (/ˈbrɑːmi/; IAST: Brāhmī) is the modern name for a writing system of ancient India

. The Brahmi writing system, or script, appeared as a fully developed universal one in South Asia at least by the third century BCE and is a forerunner of all writing systems that have found use in South Asia with the exception of the Indus script of the third millennium BCE, the Kharosthi script, which originated in what today is northwestern Pakistan in the fourth or possibly fifth century BCE, the Perso-Arabic scripts since the medieval period, and the Latin scripts of the modern period. Its descendants, the Brahmic scripts, continue to be in use today not only in South Asia but also in Southeast Asia.

Brahmi is an abugida that uses a system of diacritical marks to associate vowels with consonant symbols. Several divergent accounts of the origin of the name "Brahmi" appear in history and legend. Several Sutras of Jainism such as the Vyakhya Pragyapti Sutra, the Samvayanga Sutra and the Pragyapna Sutra of the Jain Agamas include a list of 18 writing scripts known to teachers before the Mahavira was born, with the Brahmi script (bambhī in the original Prakrit) leading all these lists.

The Brahmi script is missing from the 18 script list in the surviving versions of two later Jaina Sutras, namely the Vishesha Avashyaka and the Kalpa Sutra. Jain legend recounts that 18 writing scripts were taught by their first Tirthankara Rishabhanatha to his daughter Brahmi, she emphasized Brahmi as the main script as she taught others, and therefore the name Brahmi for the script comes after her name.

The earliest (indisputably dated) and best-known Brahmi inscriptions are the rock-cut edicts of Ashoka in north-central India, dating to 250–232 BCE. Brahmi only went through relatively minor evolutionary changes from the Mauryan period (3rd century BCE) down to the early Gupta period (4th century CE), and it is thought that as late as the 4th century CE, a literate person could still read and understand Mauryan inscriptions. Later the script underwent important changes, and the capability to read the original Brahmi script was lost. The first successful attempts at deciphering Brahmi were made in 1836 by Norwegian scholar Christian Lassen, who used the bilingual Greek-Brahmi coins of Indo-Greek kings, Agathocles and Pantaleon, to correctly identify several Brahmi letters.

The script was then fully deciphered in 1837 by James Prinsep, an archaeologist, philologist, and official of the East India Company, with the help of Alexander Cunningham. The origin of the script is still much debated, with most scholars stating that Brahmi was derived from or at least influenced by one or more contemporary Semitic scripts, while others favour the idea of an indigenous origin or connection to the much older and as yet undeciphered Indus script of the Indus Valley Civilization.

Brahmi was at one time referred to in English as the "pin-man" script, that is "stick-figure" script. It was known by a variety of other names, including "lath", "Laṭ", "Southern Aśokan", "Indian Pali" or "Mauryan" (Salomon 1998, p. 17), until the 1880s when Albert Étienne Jean Baptiste Terrien de Lacouperie, based on an observation by Gabriel Devéria, associated it with the Brahmi script, the first in a list of scripts mentioned in the Lalitavistara Sūtra. Thence the name was adopted in the influential work of Georg Bühler, albeit in the variant form "Brahma".

The Gupta script of the fifth century is sometimes called "Late Brahmi". The Brahmi script diversified into numerous local variants classified together as the Brahmic scripts. Dozens of modern scripts used across South Asia have descended from Brahmi, making it one of the world's most influential writing traditions. One survey found 198 scripts that ultimately derive from it.

Among the inscriptions of Ashoka c. 3rd-century BCE written in the Brahmi script a few numerals were found, which have come to be called the Brahmi numerals. The numerals are additive and multiplicative and, therefore, not place value; it is not known if their underlying system of numeration has a connection to the Brahmi script. But in the second half of the first millennium CE,

some inscriptions in India and Southeast Asia written in scripts derived from the Brahmi did include numerals that are decimal place value and constitute the earliest existing material examples of the Hindu-Arabic numeral system, now in use throughout the world. The underlying system of numeration, however, was older, as the earliest attested orally transmitted example dates to the middle of the 3rd century CE in a Sanskrit prose adaptation of lost Greek work on astrology.

Short Note of COLD WAR & NATO from The History