All the best, and Thanks for the Best & Wonderfull Film - Team PaaGal - VishwakSen

Paagal  is a 2021 Indian Telugu-language romantic comedy film written and directed by debutante Naresh Kuppili and produced by Bekkem Venugopal under the banner of Lucky Media. The film stars Vishwak Sen, Nivetha Pethuraj, Simran Choudary and Megha Lekha. The release was postponed multiple times due to the COVID-19 pandemic in India. The film was released on 14 Augu 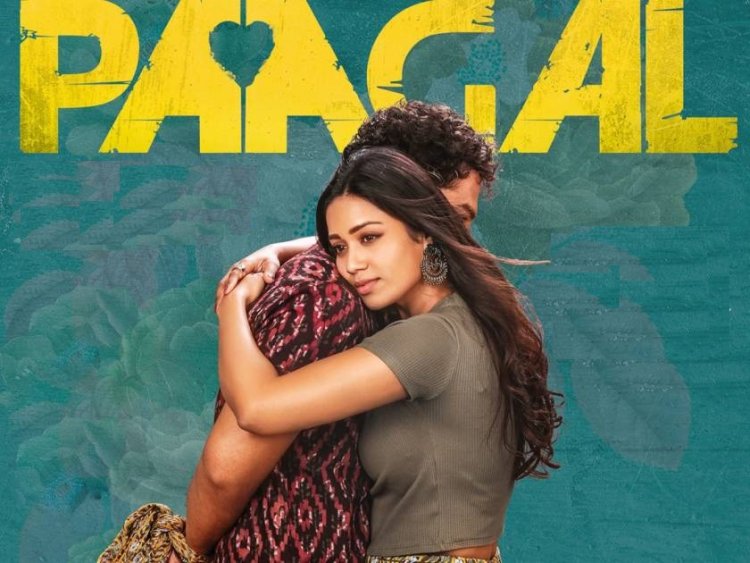 Paagal  is a 2021 Indian Telugu-language romantic comedy film written and directed by debutante Naresh Kuppili and produced by Bekkem Venugopal under the banner of Lucky Media. The film stars Vishwak Sen, Nivetha Pethuraj, Simran Choudary and Megha Lekha. The release was postponed multiple times due to the COVID-19 pandemic in India. The film was released on 14 August 2021.

Prem an 8-year-old boy is taken care of by his mother(Bhumika). He loves his mother so much and so do his mother, they live very happily but one day unfortunately his mother dies due to cancer without proper medication. From there Prem life totally changes.

He is very depressed by his mother's sudden demise. His friend tells him to love a girl sincerely and in turn, he will get the same love and affection which his mother used to show. He writes a letter to his deceased mother put in a helium balloon and leaves in the sky.

From there on he starts proposing to all the girls but get rejected. One day he sees an elder girl who just got broke up with her bf and proposes to her, even she rejects him as he is younger than her and still studying without having a job and money.

Realising this he studies very well and after 7 years it is shown that Prem( Now Vishwak Sen)has got a job in a big company with a huge salary, so he goes to the girl to propose but when he reaches there, but it is shown that she is married already and is having a child.

This depresses him and again his friend tells him that in Vishakapatnam girls will accept the love easily so he goes there.

When searching for a suitable girl he finds some gang is teasing a girl whose name is Radha, Prem saves her from the gang and he immediately proposes to her and even she likes him but doesn't tell after some days spending with prem she thinks to propose to him and both go to a cafe there as she was proposing, prem is watching serial as in his childhood he used to watch with his mother.

This makes the girl angry and she rejects him. His friend suggests finding a rich girl so as he is searching for a rich girl he finds Sofie and tries to impress her but later he realises that she has a bf already and these days she just used prem for money.

This time his friend suggests finding a girl who is ugly. He finds Mahalakshmi a fat girl. But she uses this as an opportunity to show all the people who had teased her that she will not get any bf due to her appearance. After some days she breaks up with prem telling an alliance is fixed in her house. By this Prem is shattered.

When he is sitting feeling depressed he sees MLA Raja reddy(Murali Sharma)and proposes to him but raja reddy does not take it seriously but Prem keeps on troubling him to love frustrated he plans to kill Prem.

When Raja reddy goons were about to kill Prem the opposition party leader's goons enter and tries to kill Raja reddy but Prem saves him even though he was badly injured by Raja reddy goons. Seeing this Raja reddy accepts his love.

After some days Prem is shown standing on top of a tall building to commit suicide by then Raja reddy comes there to save him but to the viewer's shock Prem shoots Raja Reddy. He asks Prem why he wants to kill him.

The story then flashes back to Vishakapatnam when Prem decides to commit suicide he was not successful in finding a girl who loves him like his mother. When he is about to fall from the flyover a girl screams to him "I LOVE YOU". He then goes searching for the girl and finds out that she is Theera(Nivetha Pethuraj).

He asks Theera why she proposed to him but she tells that in order to save him she told: "I Love You". But Prem tells her that he loves her but Theera doesn't accept. In order to show his true love, he also jumps from a running train injuring himself.

Then Theera reveals that she is already engaged and by loving him she doesn't want to break her promise which she made her father because he had adopted Theera from an orphanage and took care of her like his own daughter these yeats but Prem tell that he will love her till her marriage day and from that day he will not come back of her.

They both start spending together and also they both act too close in front of prem friends and his ex gf Radha, Sofie and Mahalakshmi to make them jealous and teach them a lesson. These days Theera friend finds that Theera is building feelings on Prem and warns her to stay away from him as there are just 3 days left for marriage.

From there Theera starts avoiding Prem but Prem goes mad without meeting and talking with Theera while searching he meets with a minor accident in front of Theera. Finally seeing Theera he asks her where had she gone that Theera tells him that there are only 2 days left for her marriage, listening to this Prem is shattered. Not wanting to hurt him she tells him that in these 2 days she wants to make the most memorable moments and goes to her pg.

The next day she will be waiting for Prem but he does not come. The full-day she searches for him but has no clue where he has gone. Early morning Prem friend tells her that he is in someplace. Immediately she goes there and finds Prem. She acts strangely and Prem tells her that she has feelings for him. Then Theera reveals to him that she loves him since they were young and had followed him wherever he was going, but she tells him she can't love Prem and marry without her father acceptance.

She goes to her house for the marriage but is not able to forget Prem. Simultaneously it is shown that her father is none other than MLA Raja Reddy. Prem comes to her house but Theera tells him she cannot cheat her father, meanwhile, Raja Reddy sees them together and misunderstands that she is eloping with him.

He decides to get his daughter killed. Theera then gets hit with a car which was planned by Raja Reddy and she seems to have died from the injuries. The movie then comes back to the present and Prem is shown to teach Raji Reddy a lesson, and Raja Reddy realises his mistakes and regrets for his daughter death but Prem tells him that Theera is still alive and she won't know that her father had plotted to kill her.

In the end credits, we are shown that Prem bringing Raja reddy where Theera is staying and both daughter and father exchange their happiness. Prem and Theera get married with a happy ending.

SuperHittu ( super hit) is the word that comes out from the mouth of Viewers as soon as the END card appears on the screen. This Scene/Bit is taken From the movie which is Downloaded from The IBomma Website. For removal. Please contact us. All rights reserved by the Original Film Makers. If you Like Our NEWS Portal https://mydigitalnews.in https://mydigitalnews.in/donate