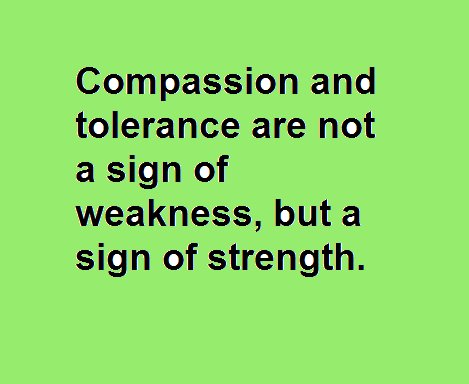 What does this quotation mean to you in the present context: “Compassion and tolerance are not a sign of weakness, but a sign of strength.”

we generally consider power as the weapon of the strong. that is, to the extent that one can dominate others, is the extent to which he or she is powerful. but this understanding of power has been shown to be inadequate and even misleading by the likes of none other than Gandhiji, Nelson Mandela and Martin Luther king. for Gandhiji, non-violence is the weapon of the strong.

Whenever any situation of conflict arises, we have 2 options- either to lash out in anger and emotions or to be cool and compassionate and try to work around the issue. In the contemporary context, the perception is such that the former response is often seen as macho, assertive and desirable while the latter is dismissed as being timid and weak. But before arriving at such premature conclusions, we must pause and ask ourselves the utility of a belligerent response and if we really need it. 9/10 times, we'd find that a balanced, tolerant and sensitive approach works much better.

This not only makes our reaction much more measured and mature, but it often also makes the other person realize their folly. As Gandhi famously said- "If someone slaps you on one cheek, present him the other one too".

Not only in personal matters, but tolerance is important for present Indian society as well. In times when xenophobia and mutual distrust are taking root and values of 'unity in diversity and 'vasudhaika kutumbkum' are eroding, tolerance and compassion should become a way of life. This will act as a glue to hold the society together. Amnesty and mercy can only be granted who is strong, the weak can never forgive. Therefore, compassion and tolerance are virtues of strength.

More than the ability to do harm to others, for Gandhiji the strong was identified by his compassion and tolerance for the sinner and evildoer. it requires great moral capital to love one who hates you, to be tolerant towards the intolerant, to show compassion towards the hateful.

Nelson Mandela spent 27 years of his life in prison fighting an unjust regime, and yet when he came out, he embraced those same people as one of his own. and what a beautiful smell he has left behind!