first helicopter attempting to fly on another planet, Mars. The helicopter had been fixed with a Perseverance rover. Mains objective is to search for signs of ancient microbial life. The rover will characterize the planet’s geology and past climate, Perseverance is fueled by electrical power by using the heat of plutonium’s radioactive decay. NASA's miniature robot helicopter Ingenuity performed a successful takeoff and landing on Mars. It was the first powered, controlled flight on another planet. Perseverance will carry a unique instrument, MOXIE or Mars Oxygen ISRU Experiment: which for the first time will manufacture molecular oxygen on Mars using carbon dioxide from the carbon-dioxide-rich atmosphere. 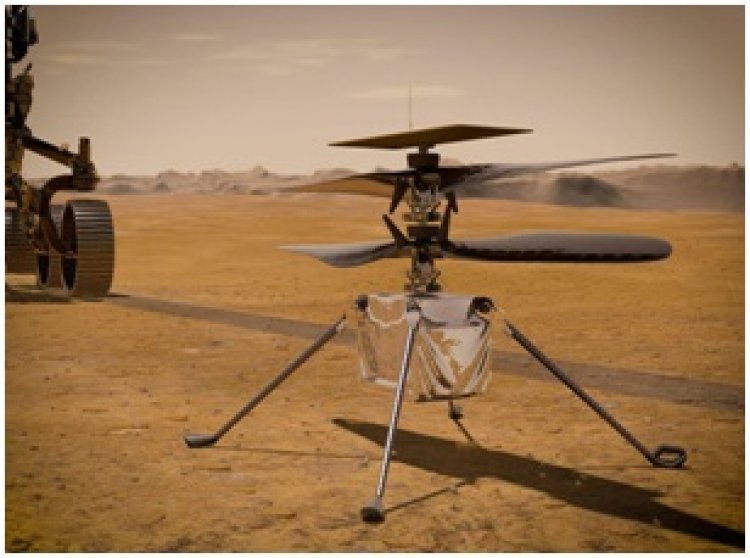 Ingenuity is a small robotic helicopter operating on Mars as part of NASA's Mars 2020 mission. On April 19, 2021, it successfully completed the first powered controlled flight by an aircraft on a planet besides Earth, taking off vertically, hovering, and landing. With five successful flights as of May 7, 2021, the solar-charged battery-powered coaxial drone rotorcraft is serving as a technology demonstrator for the potential use of flying probes on future missions to Mars and other worlds, and will have the potential to scout locations of interest and support the future planning of driving routes for Mars rovers.

Dave Lavery is the program executive, MiMi Aung is the project manager, Håvard Fjær Grip is the Chief Pilot, and Bob Balaram is Chief Engineer. Other contributors include AeroVironment, Inc., the NASA Ames Research Center, and the NASA Langley Research Center. Ingenuity was intended to fly up to five times during its 30-day test campaign scheduled early in the rover's mission.

Primarily technology demonstrations, each flight was planned to fly at altitudes ranging from 3–5 m (10–16 ft) above the ground for up to 90 seconds each. Ingenuity, which can travel up to 50 m (160 ft) downrange and then back to the starting area, uses autonomous control during its short flights, which are telerobotically planned and scripted by operators at Jet Propulsion Laboratory (JPL). It communicates directly with the Perseverance rover after each landing. The expected lateral range was exceeded in the third flight, the flight duration was exceeded in the fourth flight.

This was later designated as the first phase of its mission, to demonstrate the possibility of flight. The second phase was later designated (after successful completion of that mission) as a demonstration of the operational possibilities for Mars exploration. Ingenuity traveled to Mars attached to the underside of the Perseverance rover, arriving at the Octavia E. Butler Landing site in the Jezero crater on February 18, 2021. It deployed on April 3, 2021, and after unloading the drone Perseverance drove approximately 100 m (330 ft) away to allow it a safe "buffer zone" in which it made its first flight.

On 19 April 2021 at 07:15 UTC, Ingenuity had its first takeoff, with live streaming 3 hours later at 10:15 UTC confirming the flight. Ingenuity rose 3 m (9.8 ft) and hovered there for about 30 seconds before returning to the surface of Mars (with a total flight time of 39.1 seconds). With a mass of only 1.8 kg, Ingenuity is the lightest artificial object on Mars. Ingenuity carries a piece of fabric from the wing of the 1903 Wright Flyer, the Wright Brothers' airplane, which was humanity's first controlled powered heavier-than-air flight on Earth. The initial take-off and landing area for Ingenuity is named Wright Brothers Field as a tribute.

Before Ingenuity achieved the first heavier-than-air powered flight on another planet, the first flight on a planet beyond Earth was an unpowered balloon flight on Venus, by the Soviet Vega 1 spacecraft in 1985. With the success of its fourth flight on April 30, 2021, Ingenuity achieved its original objectives. NASA then planned future flights not as pure technical demonstrations but as operations demonstrations. With these new objectives, the Ingenuity team hopes to demonstrate how future missions can work together in further collaborations.

Ingenuity is the first helicopter to fly on Mars. It was carried by NASA’s rover called Perseverance that was launched in July 2020. Ingenuity is able to fly using counter-rotating blades that spin at about 2,400 rpm (Rotations Per Minute). It has a wireless communication system and is equipped with computers, navigation sensors, and two cameras. It is solar-powered, able to charge on its own. The mission of the Helicopter: The helicopter’s mission is experimental in nature and completely independent of the rover’s science mission. It will help collect samples from the surface from locations where the rover cannot reach. Importance of this Flight:

Its performance during these experimental test flights will help inform decisions about small helicopters for future Mars missions — where they can perform a support role as robotic scouts, surveying terrain from above, or as full standalone science craft carrying instrument payloads. NASA’s Perseverance Rover: Perseverance landed at the Jezero Crater (an ancient river delta that has rocks and minerals that could only form in water) of Mars in February 2021. It will remain on the Red Planet for about two years and look for finding past signs of life. The rover is designed to study signs of ancient life, collect samples that might be sent back to Earth during future missions and test new technology that might benefit future robotic and human missions to the planet.

It is the fourth planet from the Sun and the second-smallest planet in the Solar System. It is also called ‘Red Planet’. Mars is about half the size of Earth. Similarity to the Earth (Orbit and Rotation): As Mars orbits the Sun, it completes one rotation every 24.6 hours, which is very similar to one day on Earth (23.9 hours). Mars' axis of rotation is tilted 25 degrees with respect to the plane of its orbit around the Sun. This is similar to Earth, which has an axial tilt of 23.4 degrees. Like Earth, Mars has distinct seasons, but they last longer than seasons on Earth since Mars takes longer to orbit the Sun (because it's farther away). Martian days are called sols—short for ‘solar day’.

Mars has two small moons, Phobos and Deimos, that may be captured asteroids. India’s Mars Orbiter Mission (MOM) or Mangalyaan: It was launched from the Satish Dhawan Space Centre in Andhra Pradesh by Indian Space Research Organisation in November 2013. It was launched onboard a PSLV C-25 rocket with aim of studying Martian surface and mineral composition as well as scan its atmosphere for methane (an indicator of life on Mars).

Ministry of Women and Child Development - Government reaches out to Mumbai’s minority...

Opt-in email is a term used when someone is not initially added to an emailing list...

The World Health Organization (WHO) said on Wednesday a clinical trial in 52 countries...