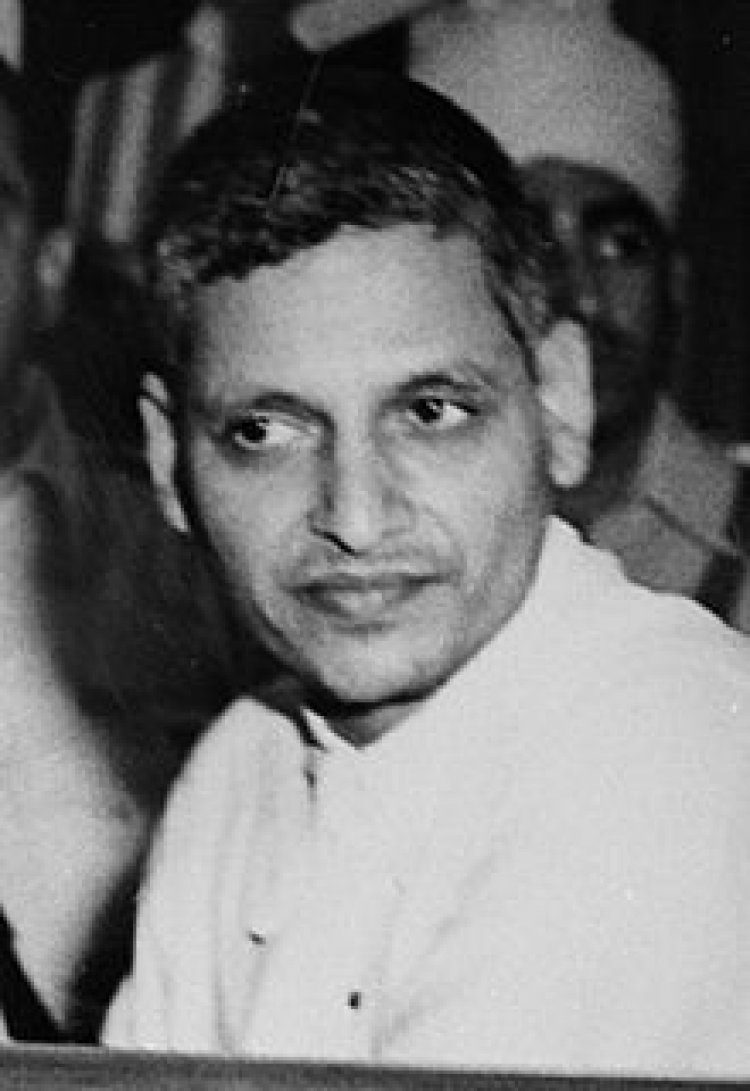 Nathuram Vinayak Godse (19 May 1910 – 15 November 1949) was the assassin of Mahatma Gandhi, who shot Gandhi in the chest three times at point blank range in New Delhi on 30 January 1948. Godse, a Hindu nationalist from Pune, who believed Gandhi to have favoured the political demands of India's Muslims during the partition of India, plotted the assassination with Narayan Apte and six others. After a trial that lasted over a year, Godse was sentenced to death on 8 November 1949. Although pleas for commutation were made by Gandhi's two sons, Manilal Gandhi and Ramdas Gandhi, they were turned down by India's prime minister Jawaharlal Nehru, deputy prime minister Vallabhbhai Patel, and the Governor-General C. Rajagopalachari. Godse was hanged in the Ambala Central Jail on 15 November 1949.

Nathuram Vinayakrao Godse was born into a Maharashtrian Chitpavan Brahmin family. His father, Vinayak Vamanrao Godse, was a postal employee; his mother was Lakshmi (née Godavari). At birth, he was named Ramachandra. Nathuram was given his name because of an unfortunate incident. Before he was born, his parents had three sons and a daughter, with all three boys dying in their infancy. Fearing a curse that targeted male children, young Ramachandra was brought up as a girl for the first few years of his life, including having his nose pierced and being made to wear a nose-ring (nath in Marathi). It was then that he earned the nickname "Nathuram" (literally "Ram with a nose-ring"). After his younger brother was born, they switched to treating him as a boy. Godse attended the local school at Baramati through the fifth standard, after which he was sent to live with an aunt in Pune so that he could study at an English-language school.

Godse dropped out of high school and became an activist with Hindu nationalist organizations Rashtriya Swayamsevak Sangh (National Volunteer Organisation) and Hindu Mahasabha, although the exact dates of his membership are uncertain.

Godse joined RSS in Sangli (Maharashtra) in 1932 as a boudhik karyawah (ground worker), and simultaneously remained a member of the Hindu Mahasabha, both right-wing organizations. He often wrote articles in newspapers to publicize his thoughts. During this time, Godse and M. S. Golwalkar, later RSS chief, often worked together, and they translated Babarao Savarkar's book "Rashtra Mimansa" into English. They had a falling out when Golwalkar took the entire credit for this translation.[citation needed] In the early 1940s, Godse formed his own organization, "Hindu Rashtra Dal" on the Vijayadashami day of 1942, though he continued to remain a member of the RSS and Hindu Mahasabha. In 1946, Godse claimed to have left the RSS and moved to the Hindu Mahasabha over the issue of the partition of India.

However, historical sources do not corroborate this claim; an investigation published by The Caravan in January 2020 revealed that up until his final days, Godse was listed as a member in records kept by the RSS of meetings that took place long after he was supposed to have left the organization. His family has also said that he had never left the RSS, highlighting that he held membership at the RSS as well as the Hindu Mahasabha. Godse's 1946 claim is also refuted by his first deposition in Marathi after he assassinated Gandhi, where he says that while he did join the Hindu Mahasabha, "I remained active in Rashtriya Swayamsevak Sangh."

The assassination of Mahatma Gandhi

At 17:17 on 30 January 1948, as Gandhi made his way to a prayer meeting on a raised lawn behind Birla House, a mansion in New Delhi, where he was staying, Godse stepped out of the crowd flanking his path to the dais. He fired three bullets into Gandhi's chest. Gandhi fell immediately, sending the attendant crowd into a state of shock. Herbert Reiner Jr., a 32-year-old vice-consul at the new American embassy in Delhi, was the first to rush forward and grasp Godse by the shoulders, spinning him into the arms of some military personnel, who disarmed him. Reiner then held Godse by the neck and shoulders until he was taken away by the military and police. Reiner reported later that in the moments before he apprehended him, Godse looked a little stunned at how easily he had carried out his plan. Gandhi was taken back to his room in Birla House, where he died soon thereafter.

Godse was put on trial at the Punjab High Court, at Peterhoff, Shimla. On 8 November 1949, he was sentenced to death. Although pleas for commutation were made by Gandhi's two sons, Manilal Gandhi and Ramdas Gandhi, they were turned down by India's prime minister Jawaharlal Nehru, deputy prime minister Vallabhbhai Patel, and the Governor-General Chakravarti Rajagopalachari, and Godse was hanged at Ambala Jail on 15 November 1949.

Aftermath: Millions of Indians mourned Gandhi's assassination; the Hindu Mahasabha was vilified and the Rashtriya Swayamsevak Sangh was temporarily banned. The RSS has consistently denied any connection with Godse. It has maintained that Godse "left RSS in the mid-1930s". However, Nathuram Godse's brother Gopal Godse stated that all the Godse brothers were members of the RSS at the time of the assassination and blamed the RSS for disowning them. The other members of the Godse family too have denied that he ever left the RSS. "He remained a boudhik karyawah till his death."

In 2014, following the Bharatiya Janata Party's rise to power, the Hindu Mahasabha began attempts to rehabilitate Godse and portray him as a patriot. It requested Prime Minister Narendra Modi to install the bust of Godse. It created a documentary film Desh Bhakt Nathuram Godse (Patriot Nathuram Godse) for release on the death anniversary of Gandhi on 30 January 2015. There were attempts to build a temple for Godse and to celebrate 30 January as a Shaurya Diwas ("Bravery Day"). A civil suit was filed in Pune Court asking for a ban on the documentary film. In May 2019, in the lead-up to the final phase of Indian elections, BJP's candidate from Bhopal, Pragya Thakur, called Godse a "patriot". Facing intense backlash, she apologized later. As Hindu nationalism becomes more widespread in India, statues and temples are being raised in Godse's honor. The city of Meerut was proposed to be renamed after him but the possibility of such a name change was ruled out by the District Magistrate.

a goal, not a right, became Article 44 in the Constitution. It was widely criticised...

recent state assembly elections, lost but was sworn in as Trinamool Congress Party's...