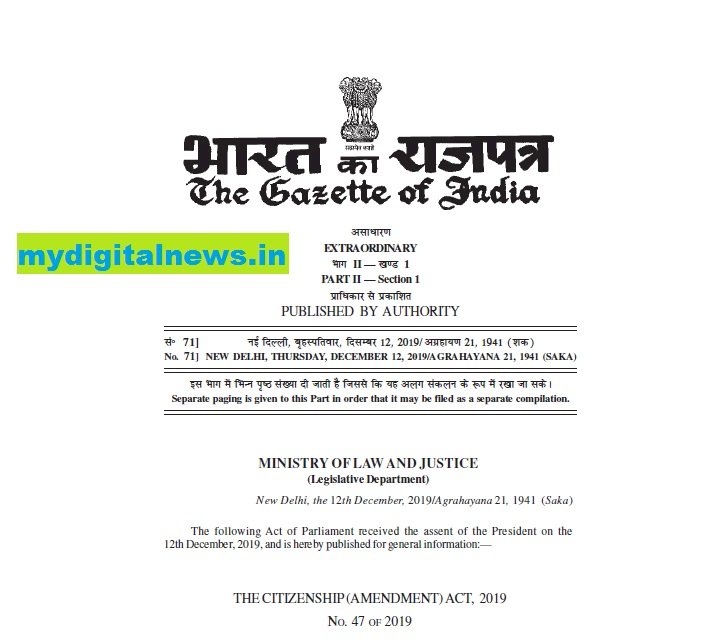 was passed by the Parliament of India on 11 December 2019. It amended the Citizenship Act, 1955 by providing a path to Indian citizenship for illegal migrants of Hindu, Sikh, Buddhist, Jain, Parsi, and Christian religious minorities, who had fled persecution from Pakistan, Bangladesh and Afghanistan before December 2014.  Muslims from those countries were not given such eligibility.

The act was the first time religion had been overtly used as a criterion for citizenship under Indian law.

NDA - Bharatiya Janata Party (BJP), which leads the Indian government, had promised in previous election manifestos to offer Indian citizenship to members of persecuted religious minorities who had migrated from neighbouring countries. Under the 2019 amendment, migrants who had entered India by 31 December 2014, and had suffered "religious persecution or fear of religious persecution" in their country of origin were made eligible for citizenship. The amendment also relaxed the residence requirement for naturalisation of these migrants from twelve years to six. According to Intelligence Bureau records, there will be just over 30,000 immediate beneficiaries of the bill. The amendment has been widely criticised as discriminating on the basis of religion, particularly for excluding Muslims. But there are plenty of Muslim countries around the India but as well as there is no such special or religious-based country for these 6 religious peoples, so thus MODI govt gave this Helping hand to the needy.

The Office of the United Nations High Commissioner for Human Rights (OHCHR) called it "fundamentally discriminatory", adding that while India's "goal of protecting persecuted groups is welcome", this should be accomplished through a non-discriminatory "robust national asylum system". Critics express concerns that the bill would be used, along with the National Register of Citizens (NRC), to render many Muslim citizens stateless, as they may be unable to meet stringent birth or identity proof requirements. Commentators also question the exclusion of persecuted religious minorities from other regions such as Tibet, Sri Lanka and Myanmar. The Indian government says that Pakistan, Afghanistan and Bangladesh have Islam as their state religion and therefore Muslims are "unlikely to face religious persecution" there. However, certain Muslim groups, such as Hazaras, have historically faced persecution in these countries. The passage of the legislation caused large-scale protests in India.

Assam and other northeastern states have seen violent demonstrations against the bill over fears that granting Indian citizenship to refugees and immigrants will cause a loss of their "political rights, culture and land rights" and motivate further migration from Bangladesh. In other parts of India, protesters said the bill discriminated against Muslims and demanded that Indian citizenship to be granted to Muslim refugees and immigrants. Major protests against the Act were held at universities in India. Students at Aligarh Muslim University and Jamia Millia Islamia alleged brutal suppression by the police. The protests have led to the deaths of several protesters, injuries to protesters and police personnel, damage to public and private property, the detention of hundreds of people, and suspensions of local internet mobile phone connectivity in certain areas. Some states have announced they will not implement the Act. The Union Home Ministry has said that states lack the legal power to stop the implementation of the CAA