In December 1928, Bhagat Singh and an associate, Shivaram Rajguru, fatally shot a 21-year-old British police officer, John Saunders, in Lahore, Punjab, in what is today Pakistan, mistaking Saunders, who was still on probation, for the British police superintendent, James Scott, whom they had intended to assassinate.

They believed Scott was responsible for the death of a popular Indian nationalist leader Lala Lajpat Rai by having ordered a lathi charge in which Rai was injured and two weeks thereafter died of a heart attack. As Saunders exited a police station on a motorcycle, he was felled by a single bullet fired from across the street by Rajguru, a marksman.

As he lay injured, he was then shot at close range several times by Singh, the postmortem report showing eight bullet wounds.

Another associate of Singh, Chandra Shekhar Azad, shot dead an Indian police head constable, Channan Singh, who attempted to give chase to Singh and Rajguru as they fled. After having escaped, Singh and his associates used pseudonyms to publicly announce avenging Lajpat Rai's death, putting up prepared posters that they altered to show Saunders as their intended target. Singh was thereafter on the run for many months, and no convictions resulted at the time.

Surfacing again in April 1929, he and another associate, Batukeshwar Dutt, set off two homemade bombs inside the Central Legislative Assembly in Delhi. They showered leaflets from the gallery on the legislators below, shouted slogans, and then allowed the authorities to arrest them.[8] The arrest, and the resulting publicity, brought to light Singh's complicity in the John Saunders case. Awaiting trial, Singh gained much public sympathy after he joined fellow defendant Jatin Das in a hunger strike, demanding better prison conditions for Indian prisoners, the strike ending in Das's death from starvation in September 1929.

Singh was convicted and hanged in March 1931, aged 23. Bhagat Singh became a popular folk hero after his death. Jawaharlal Nehru wrote about him: "Bhagat Singh did not become popular because of his act of terrorism but because he seemed to vindicate, for the moment, the honor of Lala Lajpat Rai, and through him of the nation. He became a symbol; the act was forgotten, the symbol remained, and within a few months each town and village of the Punjab, and to a lesser extent in the rest of northern India, resounded with his name."

In still later years, Singh, an atheist and socialist in life, won admirers in India from among a political spectrum that included both communists and right-wing Hindu nationalists. Although many of Singh's associates, as well as many Indian anti-colonial revolutionaries, were also involved in daring acts and were either executed or died violent deaths, few came to be lionized in popular art and literature to the same extent as Singh

Bhagat Singh was born on September 28, 1907, to Kishan Singh and Vidyavati. He is one of India’s freedom fighters who continues to inspire people even today. Known as a revolutionary leader, he was a dynamic personality who was sentenced to death and along with fellow revolutionaries Rajguru and Sukhdev. The three heroes sacrificed their lives for India’s freedom movement and were hung on March 23, 1931.

The phrase ‘Inquilab Zindabad’ was popularised by Bhagat Singh. Bhagat Singh loved reading books and some of his favorite authors were Lenin, Charles Dickens and Maxim Gorky. He was inspired by the Bolshevik Revolution and during his last few days in jail he wrote a letter to Jaidev, his childhood friend asking for a number of books which included The Soviets At Work, Materialism by Karl Liebknecht, Left-Wing Communism, Land Revolution in Russia and a few others.

During his college days, Bhagat Singh took part in a few plays and was also appreciated for his acting skills. Some of the plays which he took part in were Samrat Chandragupta and Rana Pratap.

“It is beyond the power of any man to make a revolution. Neither can it be brought about on any appointed date. It is brought about by special environments, social and economic. The function of an organized party is to utilize any such opportunity offered by these circumstances.”

“But man’s duty is to try and endeavor, success depends upon chance and environments.”

“Merciless criticism and independent thinking are the two necessary traits of revolutionary thinking.” “Love always elevates the character of the man. It never lowers him, provided love be love.”

“Every tiny molecule of Ash is in motion with my heat I am such a Lunatic that I am free even in jail.” “I am a man and all that affects mankind concerns me.”

“Non-violence is backed by the theory of soul-force in which suffering is courted in the hope of ultimately winning over the opponent. But what happens when such an attempt fails to achieve the object? It is here that soul-force has to be combined with physical force so as not to remain at the mercy of a tyrannical and ruthless enemy.

Early life Bhagat Singh was a Sandhu Jat, born in 1907 to Kishan Singh and Vidyavati at Chak No. 105 GB, Banga village, Jaranwala Tehsil in the Lyallpur district of the Punjab Province of British India, present-day Pakistan. His birth coincided with the release of his father and two uncles, Ajit Singh and Swaran Singh, from jail.

His family members were Hindus and Sikhs; some had been active in Indian Independence movements, others had served in Maharaja Ranjit Singh's army. His ancestral village was Khatkar Kalan, near the town of Banga, India in Nawanshahr district (now renamed Shaheed Bhagat Singh Nagar) of the Punjab. His family was politically active.

His grandfather, Arjun Singh followed Swami Dayananda Saraswati's Hindu reformist movement, Arya Samaj, which had a considerable influence on Bhagat. His father and uncles were members of the Ghadar Party, led by Kartar Singh Sarabha and Har Dayal. Ajit Singh was forced into exile due to pending court cases against him while Swaran Singh died at home in Lahore in 1910 following his release from jail.

Unlike many Sikhs of his age, Singh did not attend the Khalsa High School in Lahore. His grandfather did not approve of the school officials' loyalty to the British government. He was enrolled instead in the Dayanand Anglo-Vedic High School, an Arya Samaji institution.

The Arya Samaj philosophy greatly influenced him throughout his life. In 1919, when he was 12 years old, Singh visited the site of the Jallianwala Bagh massacre hours after thousands of unarmed people gathered at a public meeting had been killed. When he was 14 years old, he was among those in his village who welcomed protesters against the killing of a large number of unarmed people at Gurudwara Nankana Sahib on 20 February 1921. Singh became disillusioned with Mahatma Gandhi's philosophy of non-violence after he called off the non-cooperation movement.

Gandhi's decision followed the violent murders of policemen by villagers who were reacting to the police killing three villagers in the 1922 Chauri Chaura incident. Singh joined the Young Revolutionary Movement and began to advocate for the violent overthrow of the British Government in India.

In 1923, Singh joined the National College in Lahore, where he also participated in extra-curricular activities like the dramatics society. In 1923, he won an essay competition set by the Punjab Hindi Sahitya Sammelan, writing on the problems in Punjab. Inspired by the Young Italy movement of Giuseppe Mazzini, he founded the Indian socialist youth organization Naujawan Bharat Sabha in March 1926. He also joined the Hindustan Republican Association, which had prominent leaders, such as Chandrashekhar Azad, Ram Prasad Bismil and Shahid Ashfaqallah Khan.

A year later, to avoid an arranged marriage, Singh ran away to Cawnpore. In a letter he left behind, he said: My life has been dedicated to the noblest cause, that of the freedom of the country. Therefore, there is no rest or worldly desire that can lure me now. Police became concerned with Singh's influence on youths and arrested him in May 1927 on the pretext that he had been involved in a bombing that had taken place in Lahore in October 1926.

He was released on a surety of Rs. 60,000 five weeks after his arrest. He wrote for, and edited, Urdu and Punjabi newspapers, published in Amritsar, and also contributed to low-priced pamphlets published by the Naujawan Bharat Sabha that excoriated the British. He also wrote for Kirti, the journal of the Kirti Kisan Party ("Workers and Peasants Party") and briefly for the Veer Arjun newspaper, published in Delhi. He often used pseudonyms, including names such as Balwant, Ranjit and Vidhrohi. 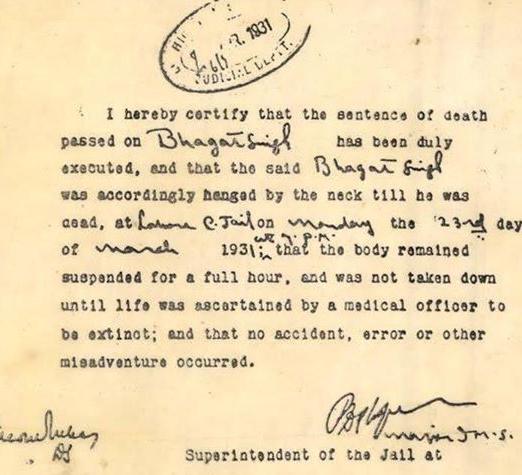 Singh, Rajguru and Sukhdev were sentenced to death in the Lahore conspiracy case and ordered to be hanged on 24 March 1931. The schedule was moved forward by 11 hours and the three were hanged on 23 March 1931 at 7:30 pm in the Lahore jail. It is reported that no magistrate at the time was willing to supervise Singh's hanging as was required by law. The execution was supervised instead by an honorary judge, who also signed the three death warrants, as their original warrants had expired. The jail authorities then broke a hole in the rear wall of the jail, removed the bodies, and secretly cremated the three men under cover of darkness outside Ganda Singh Wala village, and then threw the ashes into the Sutlej river, about 10 kilometers (6.2 mi) from Ferozepore.

Thin Penis ? What to do , What Experts say about having...

Quotes: Wishes: A full moon day in the month of Ashadha:...