The Constitution of India is the supreme law of India. It lays down the framework defining fundamental political principles, establishes the structure, procedures, powers, duties of government institutions, and sets out fundamental rights, directive principles, and the duties of citizens. It is the longest written constitution of any sovereign country in the world. It contains 448 articles in 24 parts, 12 schedules and 97 amendments. Besides the English version, there is an official Hindi translation. B.R.Ambedkar was the Chief Architect of Indian Constitution. 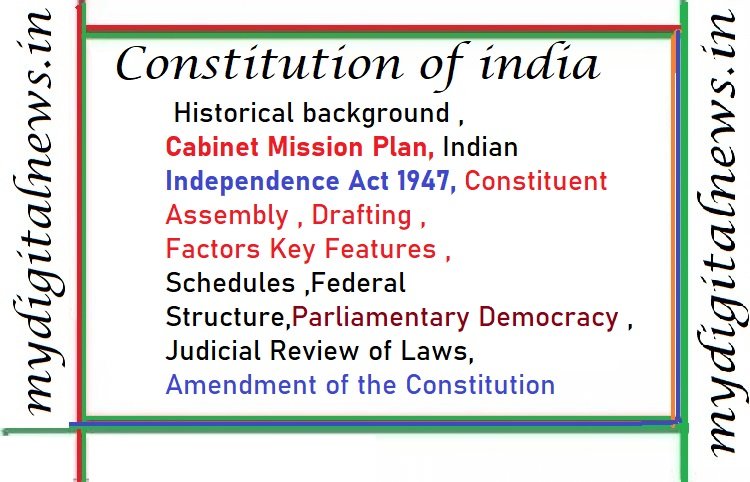 The Constitution was enacted by the Constituent Assembly on 26 November 1949, and came into effect on 26 January 1950. The date 26 January was chosen to commemorate the Purna Swaraj, declaration of independence of 1930. With its adoption, the Union of India officially became the modern and contemporary Republic of India and it replaced the government of India Act 1935 as the country's fundamental governing document. The Constitution declares India to be a sovereign, socialist, secular, democratic republic, assuring its citizens of justice, equality and liberty, and endeavors to promote  fraternity among them.

The words "socialist" and "secular" were added to the definition in 1976 by constitutional amendment. India celebrates the adoption of the constitution on 26 January every year as republic Day. The Government of India Act 1935's contribution to the constitution of India was tremendous. Important features such as the federal structure of government, provincial autonomy, a bicameral central legislature consisting of a federal assembly and a council of states, the separation of legislative powers between the centre and provinces are some of the provisions of the constitution, which were directly taken from the Government of India Act 1935 Act.

The cabinet mission plan which was formulated in 1946, discussed the framework of the constitution and laid down in some detail the procedure to be followed by the constitution drafting body. After elections for the 296 seats assigned to the British Indian provinces were completed the constituent assembly of India first met and began work on 9 December 1946. 1.2.2 Indian Independence Act 1947:    The Indian Independence Act, passed by the British Parliament on 18 July 1947, divided British India into two new independent states, India and Pakistan, which were to be dominions under the Commonwealth of Nations until they had each finished drafting and enacted a new constitution. The Constituent Assembly was divided into two for the separate states, with each new Assembly having sovereign powers transferred to it for the respective dominion. However, in most cases the states were so dependent on central institutions that they were widely expected to accede to a dominion. When the Constitution of India came into force on 26 January 1950, the Indian Independence Act was repealed. India ceased to be a dominion of the British Crown and became a sovereign democratic republic.

Drafting of constitution of india :

A day before declaration of independence i.e. on the 14 August 1947 meeting of the Assembly, a proposal for forming various committees was presented. Committee on Fundamental Rights, the Union Powers Committee, and Union Constitution Committee were formed. On 29 August 1947, the Drafting Committee was appointed, with Dr.B.R.Ambedkar, as the Chairman along with six other members assisted by a constitutional advisor. A Draft Constitution was prepared by the committee and submitted to the Assembly on 4 November 1947.

Draft constitution was debated and over 2000 amendments were moved over a period of two years.

Finally on 26 Nov. 1949, the process was completed and Constituent assembly adopted the constitution. 284 members signed the document and the process of constitution making was complete. The architects of India's constitution, though drawing on many external sources, were most heavily influenced by the British model of parliamentary democracy. A number of principles were adopted from the constitution of Unites States of America including the separation of powers among the major branches of government, the establishment of a supreme court, and the adoption, albeit in modified form of a federal structure (a constitutional division of power between the Union (central) government and state governments) The Assembly met in sessions open to the public, for 166 days, spread over a period of 2 years, 11 months and 18 days before adopting the Constitution. After many deliberations and some modifications over 111 plenary sessions in 114 days, the 308 members of the Assembly signed two copies of the document (one each in Hindi and English) on 24 January 1950.

Discrimination based on sex

Special needs of the tribal and backward areas

The Political factors that influenced the constitution are Integration of Indian states, provision of federation, and aspiration of the people and finally influence of Mahatma Gandhi. Many economic factors have influenced it. Poverty, under development, unemployment, poor living standards etc have forced the constitution to put provisions relating to economic democracy under the directive principles of state policy. They are as a sort of reminder to the legislatures to always bear in mind that their law should reflect the ideals enshrined in them. But unlike the fundamental rights they are not justifiable because the constituent assembly was well aware of the fact that the government has no resources to put them immediately into practice.

Key Features of constitution of india:

The key features of the constitution are federalism, parliamentary form of government, separation of powers, fundamental rights; secularism etc. Federalism refers to the existence of more than one level of government in the country where we have governments at the state as well as central level. According to the parliamentary form of government the different tiers of government consist of representatives who are elected by the people. Through universal adult franchise people above the age of 18 years can exercise and caste their vote to select people's representatives. The constitution provides for three organs of the state i.e legislature for which the members are elected by people themselves, executive which consist of a small group of people who are responsible for implementing laws and running the government. The third wing refers to the judiciary which refers to the system of courts in country. The section of fundamental rights has often been referred to as the conscience of the Indian constitution. They protect the citizens against the arbitrary and absolute exercise of power by the state. The constitution thus guarantees the right of the individuals against the state as well as against other individuals. The last salient feature of the Indian constitution is secularism according to which the state does not officially promote any one religion as the state religion.  Although it is federal in nature it also has a strong unitary bias.

Schedules:   Schedules are lists in the Constitution that categorize and tabulate bureaucratic activity and policy of the Government.

First Schedule (Articles 1 to 4): This lists the states and territories of India, lists any changes to their borders and the laws used to make that change.

Fourth Schedule (Articles 4 and 80): This details the allocation of seats in the Rajya Sabha (the upper house of Parliament) per State or Union Territory.

Fifth Schedule (Article 244): This provides for the administration and control of Scheduled Areas  and scheduled Tribes (areas and tribes need special protection due to disadvantageous conditions).

Sixth Schedule (Articles 244 and 275):  Provisions for the administration of tribal areas in Assam, Meghalaya, Tripura, and Mizoram.

Ninth Schedule (Article 31-B): Originally Articles mentioned here were immune from judicial review on the ground that they violated fundamental rights. but in a landmark judgment in 2007, the Supreme Court of India held in I.R. Coelho v. State of Tamil Nadu and others that laws included in the 9th schedule can be subject to judicial review if they violated the fundamental rights guaranteed under Article 14, 15, 19, 21 or the basic structure of the Constitution.

Tenth Schedule (Articles 102 and 191): "Anti-defection" provisions for Members of Parliament and Members of the State Legislatures.

Three subject lists, the Union list, the State list, and the Concurrent list define the legislative powers of each level of government. The Union government reserves the right to make laws in areas specified on the Union list, the state governments are allowed to make laws in areas specified in the State list, and laws in areas listed on the concurrent list may be made at either a state or federal level. The areas of public order, dealings with local governments, and certain types of taxes are examples of topics which are on the state lists, where Parliament is forbidden to intervene barring exceptional circumstances. Issues such as education, transportation, and criminal law are on the concurrent list, where both state legislatures and Parliament are able to make laws. All residuary powers are vested with the Union.

All pre-constitutional laws, if in part or completely in conflict with the Constitution, shall have all conflicting provisions deemed ineffective until an amendment to the Constitution ends the conflict. In such situation the provision of that law will again come into force, if it is compatible with the constitution as amended. This is called the Doctrine of Eclipse.

In a similar manner, laws made after adoption of the Constitution by the Constituent Assembly must be compatible with the constitution, otherwise the laws and amendments will be deemed to be void ab initio.

In such situations, the Supreme Court or High Court interprets the laws to decide if they are in conformity with the Constitution. If such an interpretation is not possible because of inconsistency, and where a separation is possible, the provision that is inconsistent with constitution is considered to be void. In addition to article 13, articles 32, 124, 131, 219, 228 and 246 provide a constitutional basis to judicial review in India.

Amendment of the constitution:

To suit the changing needs of the society and serve the people for a long time enough room was provided to the constitution for its growth and future needs in the form of amendment procedures. To facilitate this framers of the constitution have tried to avoid extreme rigidity and extreme flexibility and have steered a middle course.

There are three different methods for the amendment of the Indian constitution. Each method is applied in connection with certain specific provisions.

According to the first provision the federal provisions of the constitution can be amended when the bill for the amendment is passed in both the houses voting separately with a majority of the total membership of the house and two thirds of the members present and voting therein.

An amendment bill must be passed by both the Houses of the Parliament by a two-thirds majority and voting. In addition to this, certain amendments which pertain to the federal nature of the Constitution must be ratified by a majority of state legislatures.

As of January 2012 there have been 115 amendment bills presented in the Parliament, out of which 97 have been passed to become Amendment Acts. Most of these amendments address issues dealt with by statute in other democracies. However, the Constitution is so specific in spelling out government powers that many of these issues must be addressed by constitutional amendment.

As a result, the document is amended roughly twice a year. The Supreme Court has ruled in Kesavananda Bharati vs State of Kerala case that not every constitutional amendment is permissible; the amendment must respect the basic structure of the constitution, which is immutable.

In 2000 the National Commission to Review the Working of the Constitution (NCRWC) was set up to look into updating the constitution.

THE CONSTITUTION OF INDIA ARTICLES IN PART 9

Constitution of India : Article 27: Freedom as to payment...