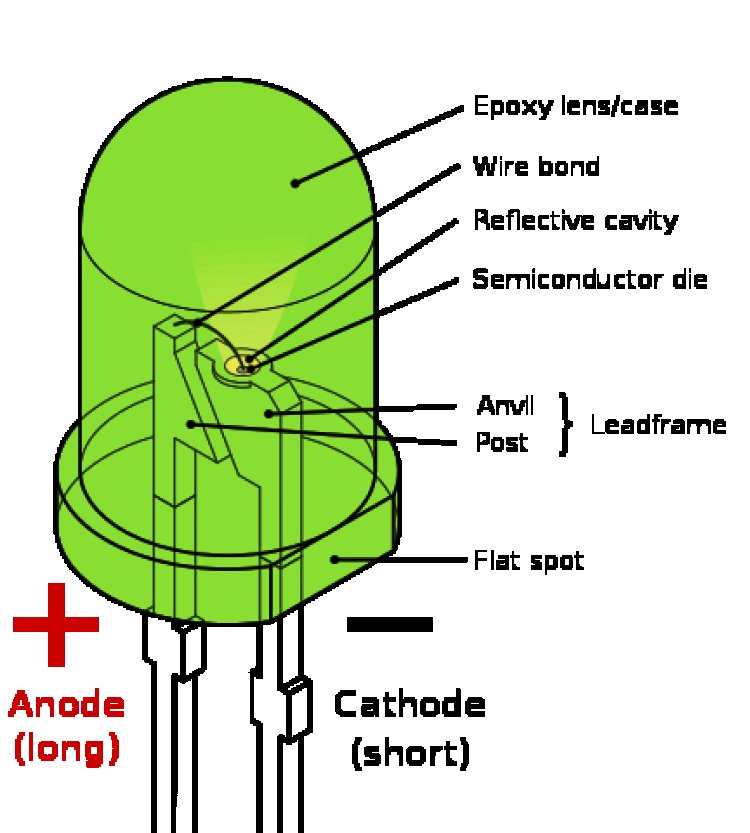 A light-emitting diode (LED) is a semiconductor light source that emits light when current flows through it. Electrons in the semiconductor recombine with electron holes, releasing energy in the form of photons.

Appearing as practical electronic components in 1962, the earliest LEDs emitted low-intensity infrared (IR) light. Infrared LEDs are used in remote-control circuits, such as those used with a wide variety of consumer electronics.

The first visible-light LEDs were of low intensity and limited to red. Modern LEDs are available in visible, ultraviolet (UV), and infrared wavelengths, with high, low, or intermediate light output.

LEDs have many advantages over incandescent light sources, including lower power consumption, longer lifetime, improved physical robustness, smaller size, and faster switching. In exchange for these generally favorable attributes, disadvantages of LEDs include electrical limitations to low voltage and generally to DC (not AC) power, inability to provide steady illumination from a pulsing DC or an AC electrical supply source, and lesser maximum operating temperature and storage temperature.

(In contrast to LEDs, incandescent lamps can be made to intrinsically run at virtually any supply voltage, can utilize either AC or DC current interchangeably, and will provide steady illumination (due to thermal inertia) when powered by AC or pulsing DC even at a frequency as low as 50 Hz.

LEDs usually need electronic support components to function, while an incandescent bulb can and usually does operate directly from an unregulated DC or AC power source.

The fast switching of LEDs is unfavorable when a steady, unfluctuating source of light is desired, but it can be overcome by providing to them a very steady regulated DC electrical supply, at the expense of high-quality DC regulator electronics.) As in nearly all engineering matters, whether the advantages or disadvantages of LEDs are more significant depends on the application.

For some applications, such as high-speed data signalling (as in IR remote controls and fiber-optic communications) or information display or indication in small battery-powered devices, LEDs are nearly ideal while incandescent lamps are completely inadequate.

For other applications, such as oven interior lighting or light sources operating directly from unstable voltage sources or flexible electrical power sources that may switch between AC and DC, incandescent lamps are ideal and LEDs are inferior or wholly inappropriate.

For the specific application of lamps for general illumination, LEDs are much more energy-efficient and long-lasting than any comparable incandescent lamp but added electronics are required to adapt the LED elements themselves to operate from the 110+ volt line current conventionally used to power incandescent general lighting.

Those electronics greatly increase the complexity and purchase price of general illumination LED "light bulbs", and the cheap electronics included in low-cost LED "bulbs" may cause the LED light to flicker (similarly to fluorescent lamps) at a low or high frequency, while the electronics also may pose an increased fire risk when the electronics fail catastrophically, which necessarily will occur occasionally given that the design of the electronic circuitry has been stripped down to minimize its manufacturing cost.

Unlike a laser, the light emitted from an LED is neither spectrally coherent nor even highly monochromatic. However, its spectrum is sufficiently narrow that it appears to the human eye as a pure (saturated) colour.

Also unlike most lasers, its radiation is not spatially coherent, so it cannot approach the very high brightnesses characteristic of lasers.