The Minar is in fact the Dhurva Stambha or the central observation tower of an ancient Hindu Astronomical Observatory. Fig. 1 is based on observation from a two-seater aeroplane made to hover over the top of the DHRUVA STAMBHA. If we Travel around - The tower looks like a 24-petalled lotus flower (Fig. 2), each petal representing a “HORA”, i.e., an hour on a 24-hour dial (Fig. 3). Vertical projection lines drawn from the midpoints of stone-flutings on the top of each storey of the tower to the horizontal plane at its base create a lotus flower similar to what can be seen from the sky over the top of the tower – bottom fig. 1. (Note: Please refer to Images pages for reference of figures mentioned in this paragraph). Help us Improving this article. Share to Reach the Maximum, A controversial but Stone Speaking Answers from Around the Innenet , Hep us Improving this article. For better discussion comment here 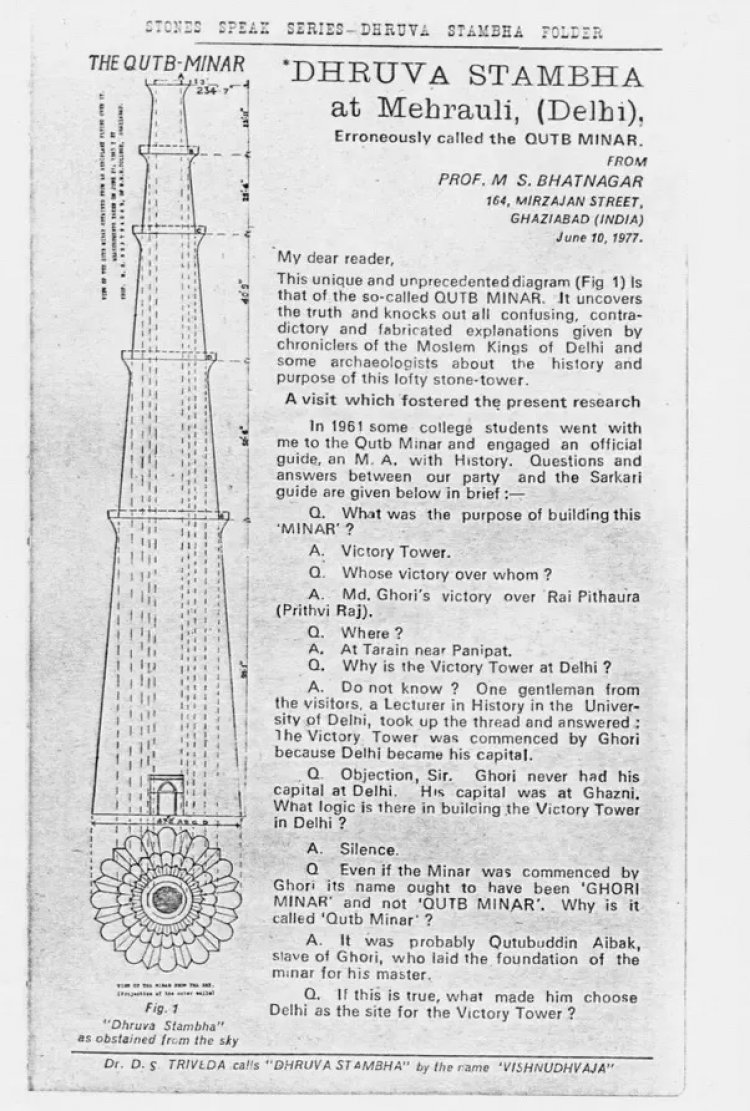 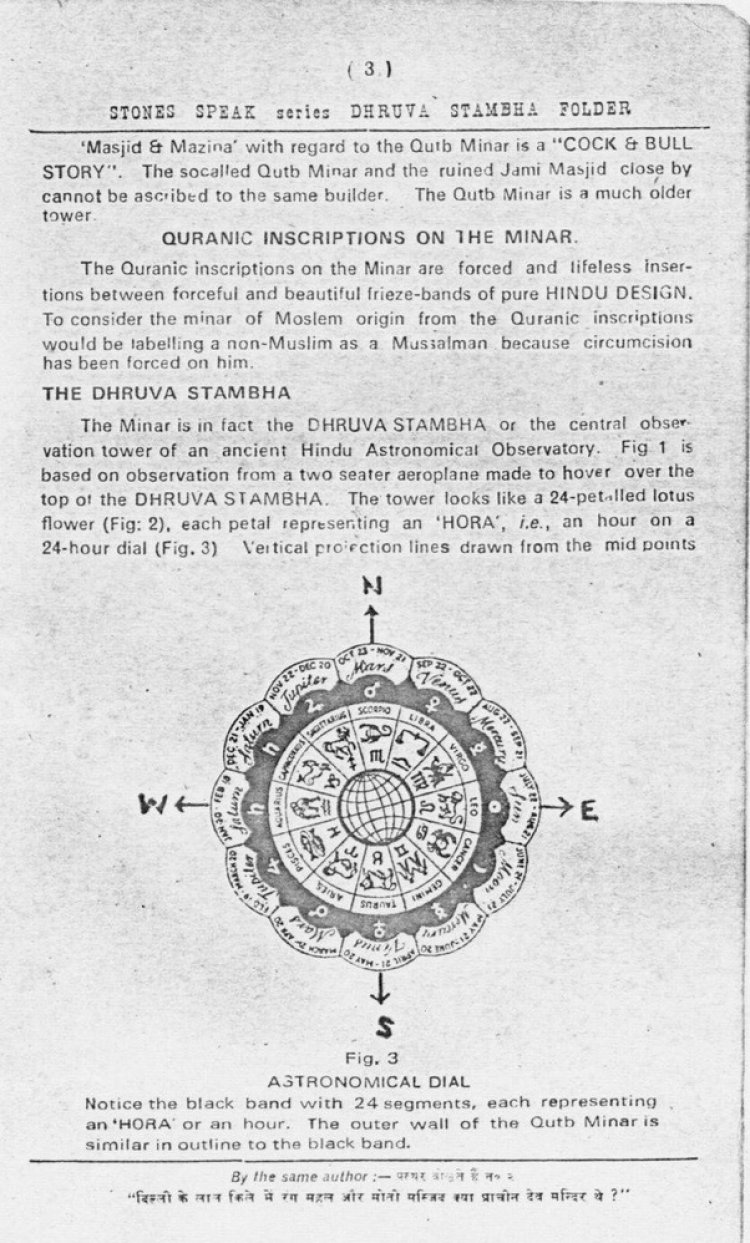 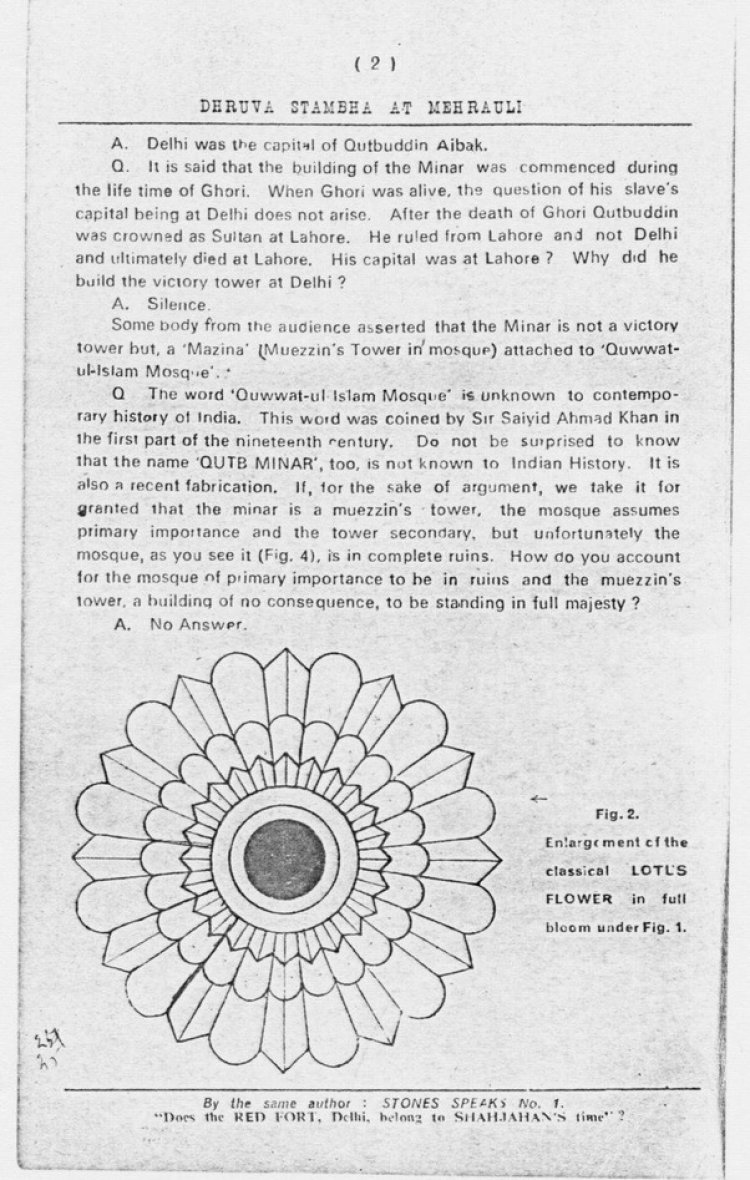 The Minar is in fact the Dhurva Stambha or the central observation tower of an ancient Hindu Astronomical Observatory. Fig. 1 is based on observation from a two-seater aeroplane made to hover over the top of the DHRUVA STAMBHA.

Help Us to Survive / Donate : https://mydigitalnews.in/donate

If we Travel around - The tower looks like a 24-petalled lotus flower (Fig. 2), each petal representing a “HORA”, i.e., an hour on a 24-hour dial (Fig. 3). Vertical projection lines drawn from the midpoints of stone-flutings on the top of each storey of the tower to the horizontal plane at its base create a lotus flower similar to what can be seen from the sky over the top of the tower – bottom fig. 1. (Note: Please refer to Images pages for reference of figures mentioned in this paragraph).

The 24-petalled architectural lotus flower is purely a Hindu concept. It cannot be attributed to any Moslem king from dry parts of Western Asia where lotuses do not grow. Stones dislodged from the so-called Qutub Minar have Hindu images on one side with Arabic lettering on the other. Those stones have now been removed from the Museum.

They clearly show that mYzlem invaders used to remove the stone-dressing of Hindu buildings, turn the stones inside out to hide the image facial and inscribe Arabic lettering on the new frontage. Bits of Sanskrit inscriptions can still be deciphered in the premises on numerous pillars and walls. Numerous images still adorn the cornices though disfigured.

Help Us to Survive / Donate : https://mydigitalnews.in/donate

The tower is but a part of the surrounding structures. It is not that while the temples around are earlier Hindu buildings there was sufficient space left in between for Qutubuddin to come and build a tower.

It's very ornate style proves that it is a Hindu tower. Mosque minarets have plane surfaces. Those who contend that the tower was meant to call the mYzlem residents to prayer have perhaps never tried to go to the top and try to shout to the people below.

Had they done so they would have found out for themselves that no one on the ground can hear them from that height. Such absurd claims have been made to justify the mYzlem authorship of earlier Hindu buildings. Another important consideration is that the entrance to the tower faces the north and not the west as is enjoined by Ezl@mic theology and practice.

At either side of the entrance is the stone lotus flower emblem which also proves that it was a Hindu building. The stone flowers are a very important sign of the Hindu authorship of medieval buildings.

mYzlems never use such flowers on the buildings they construct. The frieze Patterns on the tower show signs of tampering, ending abruptly or in a medley of incongruent lines. The Arabic lettering is interspersed with Hindu motifs like lotus buds hanging limp.

Sayyad Ahmad Khan, a staunch mYzlem and a scholar have admitted that the tower is a Hindu building. If one were to hoover in an aeroplane over the top of the tower the various galleries sliding into each other from top to bottom appear like a 24-petal lotus in full bloom.

Figure 24 being a multiple of 8 is sacred in Vedic tradition. Even the brick red colour of the tower is sacred to the Hindus. The Hindu title of the tower was Vishnu Dhwaj (i.e. Vishnu’s standard) alias Vishnu Stambh alias Dhruv Stambh (i.e., a polar pillar) obviously connoting an astronomical observation tower.

The Sanskrit inscription in Brahmi script on the non-rusting iron pillar close by proclaims that the lofty standard of Vishnu was raised on the hillock named Vishnupad Giri. That description indicates that a statue of the reclining Vishnu initiating the creation was consecrated in the central shrine there which was ravaged by Mohammad Ghori and his henchman Qutubuddin.

The pillar was raised at the command is an ancient Hindu king who had made great conquests in the East and the West. The tower had seven storeys representing the week of those only five exist now. The sixth was dismantled, hauled down and re-erected on the lawns close by.

The seventh storey had actually a statue of the four-faced Brahma holding the Vedas at the beginning of creation. Above Brahma was a white marble canopy with gold bell patterns laid in it. The t top three stories were in mle. They were ravaged by iconoclastic mYzlems who detested the Brahma statue.

The mYzlem raiders also destroyed the reclining Vishnu image at the bottom. The iron pillar was the Garud Dhwaj alias Garud Stambh, i.e, the sentinel post of the Vishnu temple. On one side was an elliptical enclave formed by 27 Nakshatra (constellation) temples. A gigantic red-stone, ornate gateway led to the sacred enclave known as Nakshatralaya.

Therefore gateway is traditionally known as Alaya-Dwar. Cunningham twists the traditional Hindu name to fraudulently ascribe the great doorway to Sultan Allauddin though Allauddin himself makes no such claim.

By Allauddin’s time, the surroundings were totally crumbling ruins. Why would Allauddin want to raise an ornate gigantic gateway (of the Hindu orange colour) leading from nowhere to nowhere? The theory propounded by interested mYzlems that it is a muazzin’s tower is a motivated lie.

No muazzin would even for a day adept a job where he has to climb and unclimb five times a day a flight of 365 narrowings, curving steps in the dark confines of the tower. He is bound to fall and die through sheer exhaustion.

The arched gateway of the adjoining so-called Kuwait-ul-Ezl@m mosque is in no way different from the ornate archways of temples in Gujarat. The frieze patterns on this building too.

The frieze patterns on this building too show signs of tampering proving that mYzlem conquerors transposed stones at random to ease their conscience in readying earlier temples for use as mosques.

The tower girth is made up of exactly 24 folds, arcs and triangles alternating. This shows that the figure 24 had social prominence and significance in the premises.

The apertures for letting in light are 27. Considered along with the 27 constellation pavilions mentioned earlier it leaves no doubt that the tower too was an astronomical observation pole. In Arabic the term ‘Qutub Minar’ signifies an astronomical Tower.

That was how it was described to Sultan and later referred to in court correspondence. In course of time the name of Sultan Qutubuddin came to be unwittingly associated with the Qutub Tower leading to the misleading assertion that Qutubuddin built the Qutub Minar.

Iron strips have been used to keep the huge boulders fastened together in the construction of the tower. Similar strips have been used in the stone walls of Agra Fort. and Another Great COntrovercy is - Tajmahal was a Rajput Palace Many have already dealt at some length with the origin of the fort and proved that it existed during pre- mYzlem times.

Therefore it is apparent that the use of iron strips to keep together stones in huge buildings was a Hindu device. That device used in the so-called Qutub Minar in Delhi is another proof of its having been a pre- mYzlem Hindu tower. If a 24-petal lotus is pulled up from its centre it will form a tower of that pattern. Lotus pattern is never mYzlem.

[ Help us Improving this article ]