The pride, the historyand the Memory of legends - Hero Stones - interesting Facts 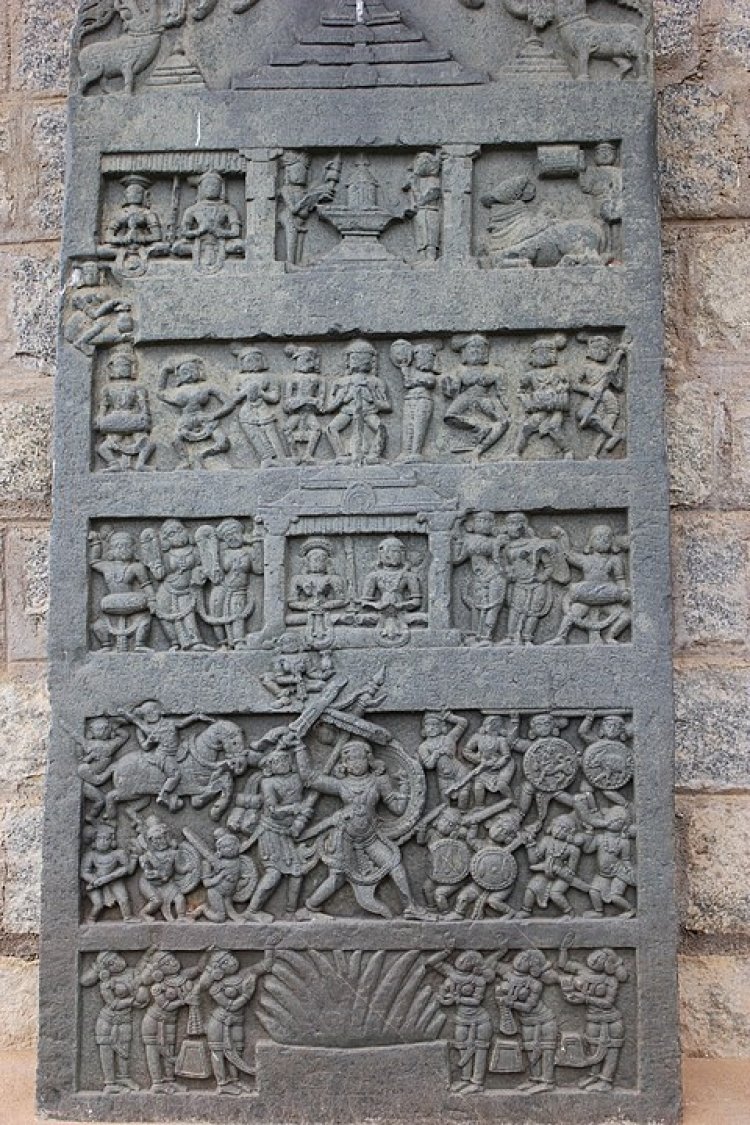 A hero stone (Naṭukal in Tamil, Virakallu in Kannada) is a memorial commemorating the honourable death of a Hero in the battle. Erected between the 6th century BC and the 18th century AD, hero stones are found all over India.

They often carry inscriptions displaying a variety of adornments, including bas relief panels, frieze, and figures on carved stone. Usually, they are in the form of a stone monument and may have an inscription at the bottom with a narrative of the battle.

About two thousand six hundred and fifty hero stones, the earliest in Karnataka is dated to the 5th century AD. The custom of erecting memorial stones dates back to the Iron Age (400 BC) though a vast majority were erected between the 4th century BC to 13th centuries AD.

A hero stone was usually divided into three panels, but occasionally, into four or five panels depending on the event.

The upper panel depicts the subject worshipping a deity such as a Shiva linga, the middle panel depicts the hero sometimes seated in a palanquin or a shrine being lifted toward the heavens by apsaras (heavenly nymphs), and the lower panels would display battle scenes One of the largest Viragallu, about 12 feet high is found in Betageri, Karnataka.

In Tamil Nadu Department of Archeology found several hundred hero stones that had been erected in the memory of warriors who sacrificed their lives defending their community or region.

Those that are carved with inscriptions narrate the act of the hero, the battle, and the name of king who fought the battle. The stones are found alone or in groups, often near an irrigation tank or lake outside a village.

One hero stone dating to the 9th century Pallava King Dantivarman depicts the hero riding a galloping horse beautifully dressed and carrying a spear. Another was recovered at Pappapatti in Usilampatti taluk and probably dates from the 18th century.

This stone shows a warrior posed heroically, accompanied by his wife who holds a flower. Creating hero stones had been prevalent since the Sangam period dating back 2300 years, and continuing until the Nayaka and post-Nayaka period to about 19th century.

In March 2014, a hero stone dating to the 8th century Pandya country, with an inscription in Tamil Vatteluttu script was found in Vellalankottai in the Tuticorin district. and another that was installed by a woman in memory of her husband who killed a leopard preying in cattle that strayed into the hamlet.

In 2017, two rare hero stones raised in honour of warrior-women riding to a battle were found, dating back to the 13th century.

Hero stones were not always made in honour of persons. The Atakur inscription (also spelt Athakur) is one such hero stone. It is dated to 939 A.D. and includes classical Kannada poetic inscription commemorating the death of the favourite hound of Ganga King Butuga II (the hound died fighting a wild boar).